A Fall, But Not Yet Fall

I woke up at 5:21 this morning to find my bed empty of husband. Then I noticed that half the lights in the house were on.
I got up to see what in hell was going on and found my husband putting a large pork roast into the smoker.
"What are you doing?" I bitch-cried. "Nighttime is for sleeping!"
"It takes twelve hours to smoke," he said, patting the butt rub on the meat.
"But we're not going to eat supper at 5:30." I was whining.

Ah well. Sleep was re-found and fallen into.

Everything was going swimmingly this morning. 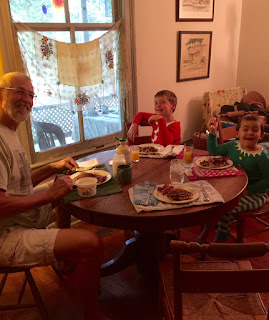 Until Gibson fell off the rope swing onto his back whereupon many tears fell and he wanted his mommy. After a time in my bed watching videos on my phone he was fine but when it was time to get up again and go home to that mommy of his, he began to cry again and insisted that he wanted to stay at Mer's house with her on her bed.

Oh Lord. With children you never know. Did he break his back? I don't think so. He can walk and I can see no bruising. He didn't let me put ice on it and he didn't want to get into the tub for my all-purpose remedy which is a lavender bath. So I felt terrible, sending an injured boy back to his mama but so it goes in the life of kids. Owen felt terrible guilt because he was the one who was showing Gibson how to swing when he fell and of course, it's not his fault either. He gave Gibson one of his Pokemon cards and watched the videos with him and encouraged him to laugh and was so sweet.

And of course I feel terrible. I mean, there's nothing in this world I could have done to prevent him from falling. Falls happen. The play set is to play on. Gravity exists. But still- every parent knows what I'm talking about here. And we were having so much fun!

Ah well. It's another hot, sunny day and the pecans are falling and hitting the tin roof of the old shed and sounding like small bombs hitting. I just got a text from Jessie that August is running a fever and what's that about? Teething? It's a pretty high fever for that but he doesn't seem to be too upset.
The Dog Days can be witchy and without doubt, make us all twitchy.
The spiders continue to grow, the heat seems relentless, we sniff the air for change. We get up at five in the morning to cook meat.
Well. Some of us do.

God. It's noon and I haven't cleaned up from breakfast yet. It may be one of those days.
It is Sunday after all, and the tail end of August, and here we are in this tiny spot in this massive universe, doing what we can to make any sense of it at all which may be the most pointless thing we can do.

Be here now. Or whatever.