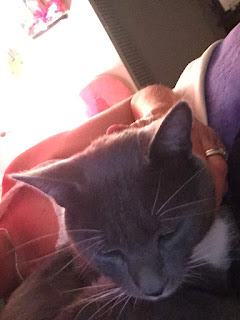 In just about an hour I'm going to go pick up Jack who was neutered this morning.
Finally.
God that cat is going to get fat. He's suddenly had a growth spurt and his head has gotten huge. He's about the laziest cat I've ever seen as it is and not having any testosterone isn't going to help that situation. But of course it had to be done. I know of at least one litter he's fathered and that's not acceptable.
Oh, Jack. My cuddly little man cat. Every night when I get in bed he comes in for a snuggle and a scratch and then when Mr. Moon gets in bed he stays for a few minutes and then, "Thump!" off the bed he goes to find sleeping arrangements of his own.

I'm having a slow, slow day. I just can't seem to focus on anything, start anything, accomplish anything. I am at one of those flat, hopeless/helpless places where I feel entirely powerless to have so much as a shadow of a dream of something good or new. I know this is depression but it feels situational to me. And I will keep moving. I will.
It may be as little movement as going to go get Jack and bringing him home and working in the garden but goddammit, I know I can't give up. What does that even mean?

I don't ever want to find out.