Just A Bit Of Pondering 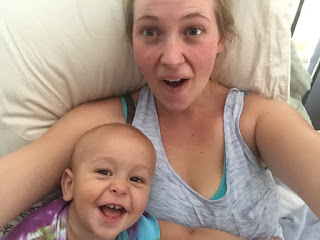 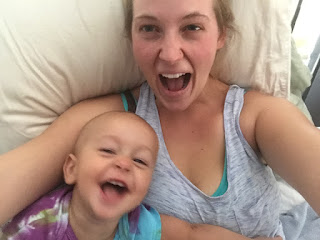 I've been texting on and off with Jessie all afternoon, getting updates on the boy. He's doing okay, still running a fever and not very interested in solid food and wanting plenty of cuddles and nurseys. And as you can see, he's still, as Jessie said, being a goober.

It always seemed to me to be such a blessing when my babies were nurslings that if they got sick, it was me and the breast they wanted and as a mother of a sick child, all I wanted to do was to make them feel better, to comfort them, to give them what they needed to get better and so it seemed the perfect miraculous equation of fulfilling need and want from both sides.
I'm not sure that in my entire life I've ever experienced anything else quite so simply perfect. Or so perfectly simple for that matter.

Ah, but it's such a trick of nature which makes us love our babies the way we do and I gladly fell for it and even now, as a grandmother, still do. Last night Owen wanted the Mr. Peep story after I'd read him his new dinosaur book and so both boys settled down, Gibson with my arm around him, Owen with his back bared to me so that I could gently scratch it, as I did when he was such a little boy, and I started telling the story of old Mr. Peep, the turkey who used to live next door and all of his friends, the goats, the chickens, the cats, the dogs, the squirrels. In the story, everyone ends up taking a nap and I tell it in such a droning voice, slow and soft, that before long, eyes are closed and breathing is deep and regular and both boys fell asleep. I traced Owen's face in the light of the nightlight, thinking of how he'd fall asleep like this when he was a baby and I tended him and how much he's grown, his face no longer a baby face, but a true boy face, with angles and hollows all his own. I kissed him on his forehead and turned to Gibson and kissed him too. I wiggled out of my position between them and got out of the bed and pulled their covers up and closed the door and thought about how grateful I am to have had so many babies to love in this life of mine.

Sometimes nature scores the right hit and it did with me. I'm so glad I was surrounded by all those hippie mamas when I started having my own children because by their example I understood that it was my own instinct (and I swear- I did have some) that I needed most of all to take care of my children, at least when they were very young. And when they got older and no longer nursed and problems sometimes seemed overwhelming and I could not comfort them the way I had when they were babies, at least I knew that all I really had to do was to love them and let them know they were loved, even in my own imperfect, damaged way, and that somehow that would get us through.
That love has never failed me and I hope that it has never failed them.

All right. That's what I wanted to say tonight. 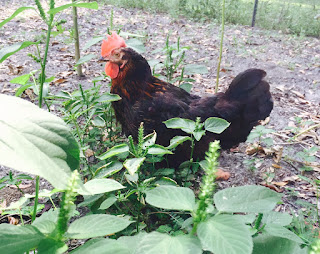 Here's Miss Trixie in the garden with me. We did some weeding this late afternoon and I was glad for her company although I have not heard her sing her song lately. She is a very old hen at this point and I love her all the more for that. She is still, I think, a beauty.