Drama Queens Run In The Family 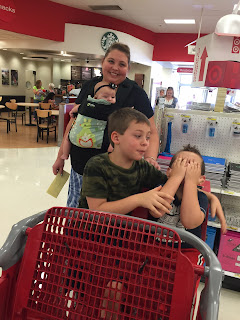 When I pulled up to Lily's house, Owen was about twenty feet up a loquat tree.
"Hey Mer!" he yelled, and I stopped and rolled down the window and said, "Be careful, boy!" and he came down like a monkey and hung from a lower branch by his knees and Gibson asked me if I'd drive him the rest of the way to the house which was about fifty feet and so I did.

We went to Target and we were on track. We were focused. Lily had the list in her hand and the boys were...well. Boys. They wanted toys. School supplies are pretty boring, it turns out. Glue sticks, Kleenex, baby wipes, pencil box, twenty (sharpened) pencils, notebooks. In that picture you can see Gibson already having a melt-down as he realized that the area where the cheap toys are usually displayed had been taken up entirely by SCHOOL SUPPLIES!
The agony! 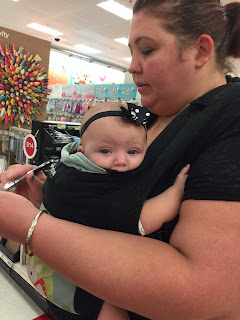 Maggie didn't seem bothered by any of it.

It was pretty bad. But we managed to find everything we needed except a "primary" composition book which has room at the top for a picture. And finally, whoopie cushions were purchased as a sop to the toy thing which made the boys both very happy with the resulting fart sounds until both cushions were blown out which happened within about fifteen minutes of purchase, one spectacularly so when Owen placed the cushion where his mother wouldn't see it (haha!) and she sat down on it as hard as she could.
Then more tears ensued, of course.

We moved on to a nearby shoe store and bought new sneakers for the boys. Gibson picked his out because they had Batman (I think it was Batman) on them and they lit up. I mean- priorities, people. Owen had a harder time picking his out and ended up with some very comfortable sneakers with memory foam in his favorite colors. Red and yellow. They are not velcro latched, however, and he's going to have to learn to tie his shoes which brought on more agony but we reassured him that his father would teach him and that tying a bow is a life-skill he needs to know anyway, and then THAT was done.

Off we went to lunch. We chose Jason's Deli today because they have a fabulous salad bar AND pizza for the boys. They pretty much have everything. Including ice cream. Hank met us and after lunch we got the requisite Hank Holds Babies photo. 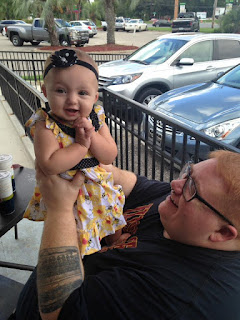 Maggie obviously took her cute pills today. That child! Check out this picture: 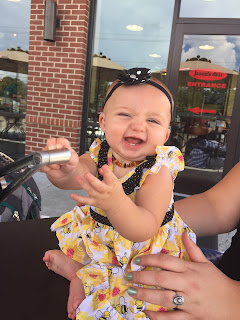 I mean, I mean, I MEAN that child is adorable. And that little ruffly dress with bees on it. Can you stand it?

As always, lunch was fun and we talked about everything and caught up on everything by which time we were ready to come home. I needed to run by Costco for my giant bottle of Tito's vodka and we passed Bass Pro World on our way. As we drove past it, Gibson said, "Wait! Is that where Boppy works?" which is hysterical because he knows quite well where Boppy works, having visited him there at the bank many times. I have no idea how that child's mind works sometimes. My favorite Gibson quote of the day came in the shoe store when he said, "I'm not even a baby anymore either!"
Which, technically is true, but he's still my baby.

Anyway, by the time I got home, this had happened: 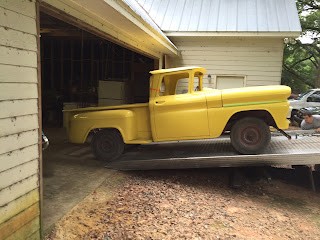 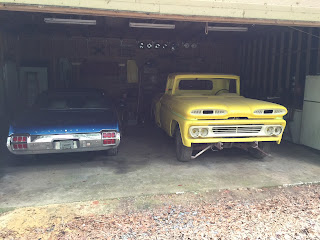 Well, let me be clear about something. That's what about one third of the garage looks like. This is not counting the upstairs part of the garage which is big enough to put an apartment in. No, really. It was built with this option in mind. But doesn't that truck look like it's happy to be here? I think he and the Cutlas are going to be good friends.
They sure don't make vehicles like they used to.
It's a 1960 Chevy and Mr. Moon is, as we speak, perusing a repair manual for it which is as big as the family Bible. And yes, I do have a family Bible.

All right. One more thing before I go make our supper (ground venison and rice stuffed peppers, in case you're interested). Buying school supplies reminded me of my own story of school supplies when I was in first grade. Of course in those days, back in Pre-History when Cleopatra was just getting her first menstrual period, school supplies were pretty simple. I lived in an extremely poor area and I don't remember if we had to bring our own pencils and crayons or not but I do know that as first graders we had to use those awful fat pencils and crayons and what genius decided that tiny-little six-year old hands needed those?
But that's not what the story is about.
We were all told to bring in a cigar box to keep our pencils and crayons in and I guess that cigar boxes were more ubiquitous than they are now because everyone did indeed bring in a regular cardboard cigar box.
Except for me.
My wood-loving carpenter grandfather lovingly sanded and lacquered a wooden cigar box for me and burned my initials into it. It was a thing of beauty.
And I hated it.
I wanted a regular, regulation cardboard cigar box like everyone else had but even at the tender age of six I knew that there was no way I could voice this because Granddaddy had gone to all of that trouble and work and so I cried hot, silent tears in private about it. I already stuck out as it was because my mother was a teacher in the school and there were only seven teachers and a principal in all and because I didn't have a father like all of the rest of the kids. Okay. So some of their fathers beat their mothers every Friday night but at least they had fathers, whereas I had none, only this ancient grandfather who gifted me with a freaky freaking wooden cigar box to hold my fat pencils.

Isn't it funny, the things we remember? And now, ironically, I sort of collect old wooden cigar boxes and give them away as gifts and keep love notes from my husband in them.

All right. Off to make the stuffed peppers.
It's been a good day and my grandchildren made me laugh a lot and in two days I'll get to see August again as well as his mama and his papa and there ain't nothing wrong with that.