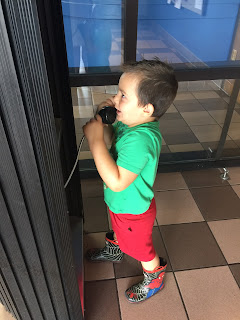 I absolutely adore this picture. To me, Gibson looks EXACTLY like some old guy in the middle of an extremely important phone conversation from back in the day. If old guys back in the day had worn Spiderman boots. Look at that face. He is getting into it. You can practically see the five o'clock shadow. He's a method actor, I can tell. I think maybe he's talking to his bookie. What do you think?
I got this shot at the main library today where we went to get new books. They have an actual pay phone in the foyer and Gibson is in love with it. He punches the buttons and checks the coin-return repeatedly and then he talks.
He's a good one, that boy. There's a place where kids can climb up some steps to a platform in the kid area and today there was a little fifteen month old girl on the steps and he went up to her and offered his hand to help her climb.
Maggie will soon be climbing but at the moment is working on crawling. 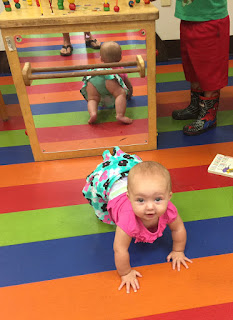 She can get where she wants to go but it's still a work in process. She keeps hitching up that cute butt of hers like she just wants to stand up and start walking. Can you see her cute butt in the mirror behind her? When I walked in to the kitchen at Lily's house this morning she clapped her hands and grinned and made her I'm-excited sounds. Such a little darling of a child she is. I can't wait to see her and August back together again. Which will be...next week!

After the library we went to the Chinese buffet because school starts in a week and so we let the boys pick our lunch spot. Many noodles were consumed. Owen discovered that soy sauce is salty. Maggie took a nap. Gibson's fortune told him that he's about to start a new business. I can't even remember mine. It must have sucked.

After lunch we went to Publix. I actually needed things. Well, you know. In the first world sense of the word "needed." Pokemon were hunted and captured. I guess. Fuck if I know.
"You know, Mer," Owen told me today, "Hunting Pokemon could change your life."
I told him I was sure it would and yet, I still wasn't interested. But hey- I'm not judging. There was that short period of my life when I got addicted to Tetris. I mean, really addicted. Catching Pokemon is probably far more interesting than fitting little blocks into other little blocks. Owen also told me today that it was nicer to say "elderly" than "old."
I told him that I preferred "old."

So that was our day. When I got home and got everything unloaded and put away, I laid down and took a nap. It was heaven. Now Mr. Moon is trying to figure out how to use the new Roku remote which we had to buy because ours disappeared. He's just discovered that we could have simply used our iPhones instead because...there's an app for that.

I have nothing else to report. Oh! We're having pork chops and sweet potatoes for supper. And broccoli. I really don't like broccoli so I make a sauce with both cheese and nutritional yeast AND lemon juice to put on it. By the time I eat it, it's probably not healthy at all.
But it's edible.
Here's what I made last night. 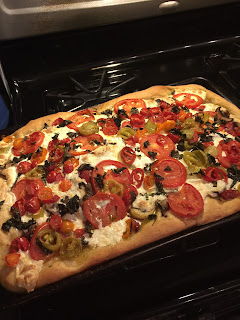 Yeah. It was good.