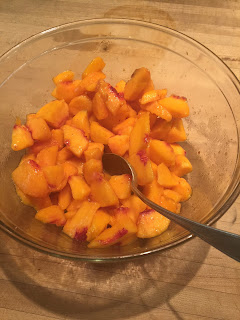 I'm taking it slowly this morning, getting things ready for this afternoon. It's been awhile since I had everyone over here. Lily's been taking on the chore of having things at her place but I want to do this here.

Mr. Moon has done a few things outside to get ready and I've got the peaches thawing and have made the deviled eggs. The shake-em-up in the mason jar with water works the best to peel fresh eggs. It's not perfect but it's hand's down better than any other way I've discovered. The salad is made, as I said last night and now I just need to make up the ice-cream mixture, the okra and tomatoes, fix the plate with tomatoes and lettuce and onion (I bought big, fat Vidalias at the Costco yesterday) and tidy up a bit. Stuff like that. Perhaps make some iced tea. Oh! And make some guacamole. Always the guacamole.

I got a message from Jessie a little after one last night saying that they were home and safe. I was so glad to see that when I got up. And then a little later, I got this picture. 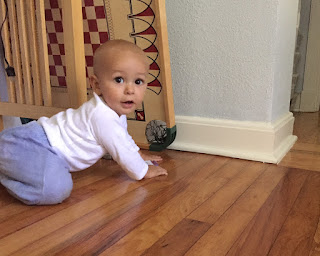 Our little love, rediscovering his own home. Jessie says the animals are so glad to see them and that August really likes seeing them. It's going to be a big change for that little boy after spending a summer in a big house in Asheville with a whole other family besides his, including a baby girl and another roommate. There was always so much going on in that house with everyone coming and going and cooking and playing music. Now it's just him and his mama and his daddy and his dog and his cat. I have to wonder what he thinks about all of this in that smart head of his. I really have no idea but I do know that we will be more than happy to see him. That he is so loved here by his aunties and uncle, his Mer and his Bop, his cousins Owen and Gibson and Magnolia. I know he was loved in Asheville like a prince but it's nice that he can be here again to get loved on by different folks.

There is never too much love. Or ice cream, for that matter.