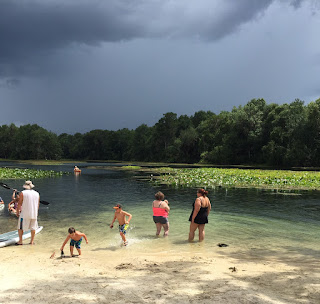 Well, our Emily has come and gone and it was a lovely whirlwind of a visit. We got to go down to the river with Lily and the kids and when we got there, that's what the sky looked like. The storm passed by us and the threat of it took quite a few people with it although the annoying middle-aged couple who believed that we all wanted to hear their goddammed country music at full blast did not leave and for that, I was sorry. And pissed.
This is a pet peeve of mine. It is SO disrespectful to others to blast music in public places. Lily said to me that if they were playing the Rolling Stones it wouldn't upset me so much but I told her that although no, it wouldn't, I would still be quite aware of the fact that it might not please other people.
It ain't right whether you're sharing country music, rap, "classic" rock, or Bach, it's a sort of intrusion and also a sort of selfishness which makes my head hurt.
We go to the river to hear the wind and the birds and the little kids and our own conversations, not someone else's idea of good music and yet I'd say that at least half the time we go down there, someone is either playing music on a boom box or from a truck's speakers.
This is why they make headphones, people.

May and Michael came out for supper and Mr. Moon got home from auction and that was nice, all of us eating together and catching up with the last twenty years of lives. I realize now more than ever how strong Emily is, how loyal and loving. And funny. Jeez, the woman is funny.

So we went to bed pretty early and got up this morning to go appear in court in Monticello and we had to leave our purses and phones in the car which was really sad because the courtroom looks like something from a John Grisham novel- the original courtroom with the carved wood and the pews and the balcony although that is blocked off now. I SO wish I had a picture.
"It's like the church of justice," I told Emily, and we giggled. We were the first people there and the only people there for quite a while until others started straggling in and someone read out names and handed each person called the plea bargain the state was willing to offer and Emily's name wasn't called and it turned out that we were in criminal court and that was a mistake and so we went downstairs and two nice ladies helped us out and Emily paid her speeding fine and we were on our way.

Here's the courthouse in Jefferson County. 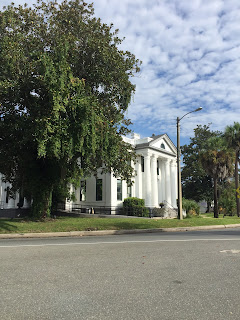 Although the court appearance thing was all a mistake we agreed that it had been good in that we finally got to see each other, touch base, catch-up. We came home and she packed up her things and we hugged hard and she left to get home to her wife whom she hasn't really seen in a week due to work schedules.

I'm still wearing my adult clothes and about to go to town, Tallahassee this time, to meet with the guy we've hired to help with the Apalachicola house plans. Mr. Moon is on full tilt with this project and I am dragging my sorry and slow and stubborn ass behind him.
How very, very first world of me to resist the idea of a new house. I don't even know what my problem is but I certainly have one.
I'm afraid of change, I'm lazy, I don't want to burden my kids with even more stuff and responsibility when we die...
No place for chickens.
Etc.

Ah well. I love my husband. He has never led me in the wrong direction yet.

Life just keeps on merrily chugging around me and catching me up in it, no matter how hard I resist.

There will be a nap later though, trust me.