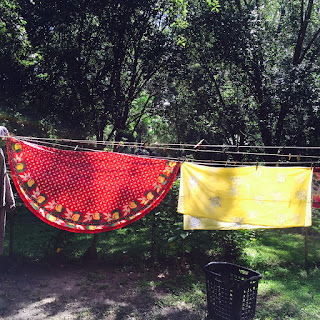 I think my heart is as at peace today as it has been in a very long time. And who knows why? The simple answer could be no more complicated than the fact that Jessie and Vergil and August are home but I don't think that's entirely it. Last night was fun but it was overwhelming. At one point even Hank had to go sit in a room by himself and be quiet.
Hank.
Who of course held August last night in the chaos of it all. 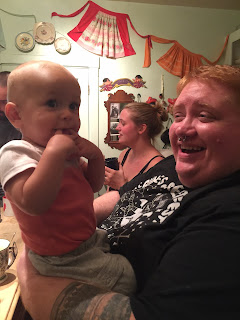 And it was chaos. My GOD! Four children, two spouses, four grandchildren.
Mr. Moon and I wandered about, catching each other's eye and going, "HOW DID THIS HAPPEN?"

When August got here, he had just woken up from a way too short nap and he was overwhelmed. It was like he remembered but he didn't know what he was remembering and it was just all too much. His mama took him into my room and nursed him for a bit and he came back to life and next thing I knew, he was waving at everyone and blowing kisses and crawling all over and playing on the floor with Maggie and pulling on his Boppy's beard and trying to figure out my overalls and banging on the little old toy piano like Jerry Lee Lewis might have done in his own infancy.
There were hamburgers and hot dogs and okra and tomatoes and all of those things I had talked about and the ice cream was good and by the time everyone had gotten in their cars to go home, the kitchen was mostly cleaned up and the dishwasher was ready to run for the fourth (or was it fifth?) time that day.
And I remembered the rooster naming contest at the last second and May gave him his name. I was judge and jury. 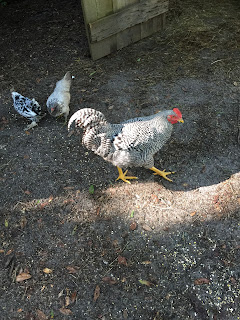 Meet Otis. Named not only for Otis Redding but for Otis the Mayberry Drunk. Or at least, that's how I have it in my mind. Otis Redding was magnificent, of course, and Otis The Drunk had a sort of sweet dignity about his drunkenness as this bird has about his rooster-ness.
Anyway, I think the name fits him and thus- again all of my chicken babies are named.

So it goes, and so it is and I took a nice walk this morning. Here's a swamp mallow with ants. 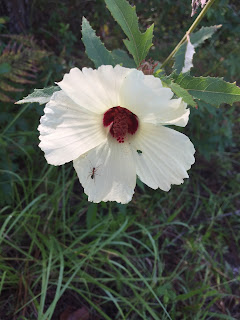 It looks so much like the okra blossom, doesn't it?

It's the slightest bit cooler today and I can almost feel summer sliding into fall. Or at least the fulcrum of the balance between them has shifted. And of course this happened today. 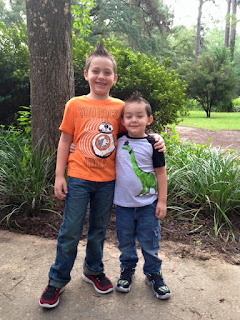 First day of school and Lily reports there were no tears. At least, not on the boys' part.
Here is my favorite picture of all the ones she took. 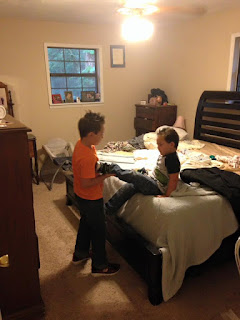 Owen helping his brother get ready for his first day of school. Something about that just touches my heart so deeply and purely. Owen has been planning for weeks now. He wanted his own alarm clock which he got so that he can wake himself and his brother up. He already had his clothes laid out before he came over to our house last night. He is growing up so beautifully and Gibson is too.

All right. One more picture before I go eat my lunch and hang out some more laundry. 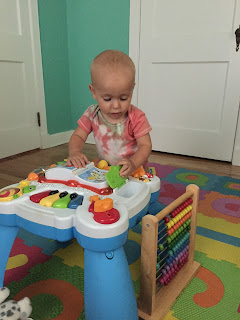 Jessie sent me this picture a little while ago. She can't get August to take his nap because he's too interested in playing with all of his new-old toys. Oh! That boy!

And Lily just called- she's already picked up Gibson from pre-K and the teachers reported he was great and he seems to have had a good time. I talked to him briefly on the phone and he sounded happy.

Life keeps on changing, doesn't it? And yet, repeating itself over and over again.

And I will take a peaceful heart and I will be grateful.