I got some stuff done today. Two bed's worth of clean sheets, went to Costco and Publix with Lily and the young'uns because it was too stormy to go to the river. And I finally picked the peas and beans and a few okra too. 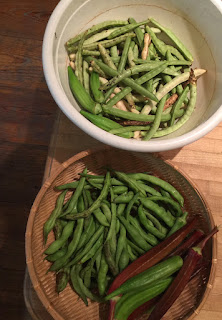 I swear- every time I pick the green beans, those sturdy, prolific rattlesnake beans, I think that this will be the last gleaning I get.
And then I am surprised again.

That's a lousy picture. I'm sorry. I'm too tired to worry about it.

I had a good time with Lily and the boys, of course. Costco is always a good time. Lily wore Maggie in her sling and every time I looked at her, she was grinning. Maggie, that is. It was a pretty good day of sampling at the old Costco. We had cheese and turkey on bread and veggie straws and applesauce and there was sausage and, oh hell. I can't even remember. As I said a few days ago, Owen has started doing a thing where he carefully puts each of his samples on its brown paper napkin in the cart and saves them for the ride home. He did this again today. I am not sure what this is about but at least he's learning about delayed gratification. It even took him awhile to eat his snacks on the ride home which drove Gibson crazy. TELL HIM TO EAT HIS SNACKS! Gibson demanded of his mother.
"They're his snacks. He can eat them when he wants," his mama said. 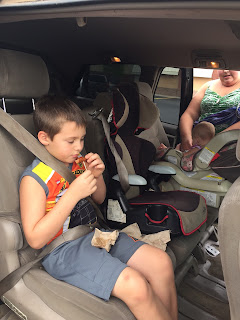 Owen savoring the heavenly aroma of his chicken sausage in anticipation of eating it, at some point.

We went to Publix, too, the one where Lily works and I swear to god- we both had to stop and talk to people for many moments at a time. Lily is beloved at that Publix and everyone wants to see her newest child and trash-talk a little bit with the boys whom they have known since they were babies, both staff and customers. We saw Miss Judy, whom I have become good friends with and when we hugged, Owen said, "What? Do you know Judy too? Do you love her too?"
"Yes," I said. "I do know Judy and I love her."
Judy gave me another squeeze.
"And I love her too," said Judy.
Owen was amazed.
His worlds were colliding.
Another thing which happened in Publix was that Gibson decided to pull up my dress while I was talking to another old friend, exposing body parts which I normally do not expose in Publix or public either, for that matter.
"Gibson!" I said, ushering him out from under my dress. "What are you doing?"
"At least you were wearing those nice black underwear," said Lily later when we were discussing the event.
This is true.

And so it went and Monday is the day that Mr. Moon may or may not go to auction which means that I may or may not need to cook his dinner and that may sound silly but it's a real thing for me and it wasn't until almost five today that he decided that he would be going, having gotten an order for a car which he can bid on tomorrow. This all involves phone calls and computer auction website research and then, if he's going, a rental car and an Uber trip to pick it up and then he comes home and packs and I make his snack bag and giant bowl of popcorn and we do a quick catch-up of the day and then we kiss and I tell him to let me know when he gets there and to drive safely and that I love him and so forth and then he leaves.
In today's snack bag he got, along with his usual stuff, a sandwich and a baggie filled with fresh cut cantaloupe because by the time he gets to Orlando, it'll be too late to get supper.

Another day and I'm tired, exhausted, and I need to go clean up the kitchen from the snack-bag preparation and I need to make myself something for supper, I suppose. After all of that shopping and garden-picking and the egg-gathering I've done today, I don't really have one damn thing I want to eat.
Ain't that the way?