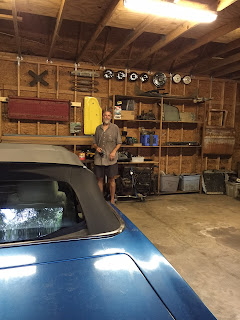 This is my husband in his garage. He has worked so hard today that he is soaking wet from sweat and if you could see the before picture of what that garage looked like, you'd have an idea of just how much work he did.
Actually, he and Jason got most of the stuff cleared out yesterday. It was a Herculean task and I am not kidding you. He threw out so much stuff and I am so proud of him. This morning he drove down to Crawfordville where the truck-in-pieces he bought was and trailered back at least parts of it. And then he arranged things on shelving that he's had and not used for approximately twenty years, all neat and tidy and arranged.
The chickens are intrigued by all of the new space in there. They come in and walk about and poop, investigating as they go. It's literally a whole new world which has opened up for them as well as for my husband.

All I did today was some laundry and some weeding. I, too, was soaked through but I took a shower and feel somewhat restored. I finally finished listening to that Richard Russo book and have started listening to another book. Downloadable audio books are about the best thing that has happened to me since I got chickens. The book I'm listening to now is as different from Russo's tome about a guy who had father issues in upper New York as is possible. 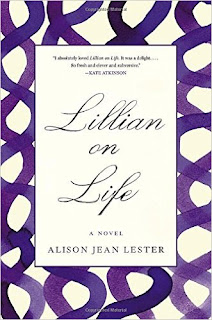 It doesn't seem to be too deep but it's certainly interesting and all from a woman's perspective.
Both Kate Atkinson and Erica Jong blurbed it nicely.

But here's one thing I'm pretty sure about- when something hits me with the force of a wrecking ball, I have to pay attention and proceed accordingly. Usually this is as painful as it sounds. And it's almost always something I really have been trying to avoid with one inadequate tactic or another because I was taught at a very early age that to get along you have to go along but this only works up to a point and then suddenly, the whole thing collapses and I have a panic attack or something equally suave and cool and subtle at which point I am forced to face my own limitations and needs (oh god!) which is horribly embarrassing and feels so very, very wrong but...
Well.
I can't go through life having panic attacks. I just can't.

I do not mean to be all oblique and evasive and shit but I'm not ready to talk about the things going through my head right now.

Meanwhile, I've got dough rising for a sort of pizza rustica and I have a huge wad of snowy white mozzarella and tomatoes and mushrooms and basil and all of that is going to be lovely, I hope, and at the very least, I have clean sheets.

It's the little things and also, it's the big things.