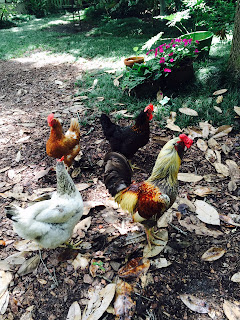 It's a hot, steamy day in Lloyd, almost one o'clock already and I have done nothing but little dribs and drabs of this and that. A quick sweep-up here, a tiny bit of laundry there, a walk to the post office where I had to stop on both the way there and back to admire my neighbor's crepe myrtle. 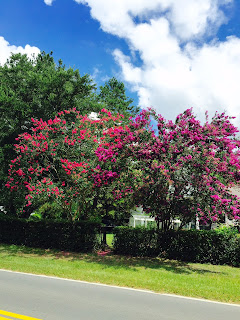 And this, people, is why you should not cut back your crepe myrtle.

I just finished my breakfast/lunch of watermelon and leftover zipper cream peas and rice. Perfection. As I ate, I read a review of a restaurant in the New Yorker, it's description of a side-dish of sweet potato puree with lemongrass and I had no longing to taste that particular pairing. The complete satisfaction of the simple peas with rice suits me absolutely and I could wish for nothing finer in this world. I want to get out into my garden today to weed and tidy and spray the fucking aphids on the peas. Last night Mr. Moon said that he thought them so delicious that he wants to tear out the entire garden and plant nothing but those peas. I understood.

I got to talk to Lis this morning. Her life has not slowed down one iota since we got back. I don't know how many gigs she's had since Wednesday or how many people have recorded at their studio which requires her to not only sit-in as a musician but to also provide the meals. When I say that I am a badass, I can't even begin to compare myself to that woman. 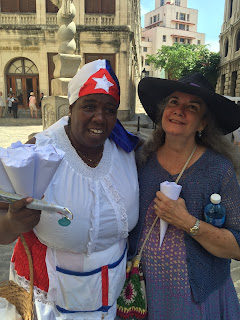 Here she is with a lady who was selling peanuts, singing in the most gorgeous deep voice you ever heard. Lis joined her for a moment, harmonizing and it was instant love between them. We bought the peanuts and never did get around to eating them all although they were delicious. We were just never hungry enough, nor did we have enough time! I'm not kidding you.

Okay. Cars. Isn't that the image everyone has now of Cuba? The vintage cars. I know I posted this before, but doesn't it sort of sum up what we think Cuba might look like? 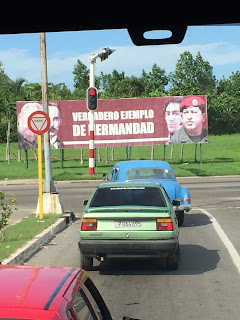 The Revolutionary billboard and a vintage American car?

Here are some more of those old beauties. 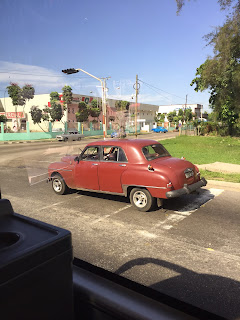 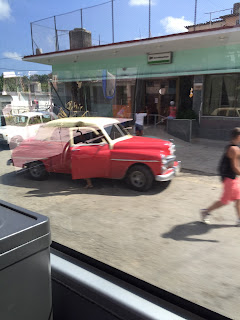 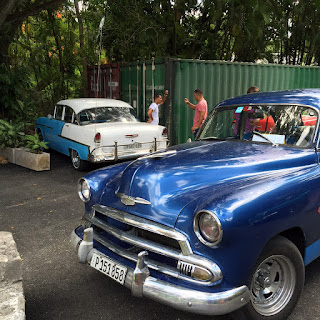 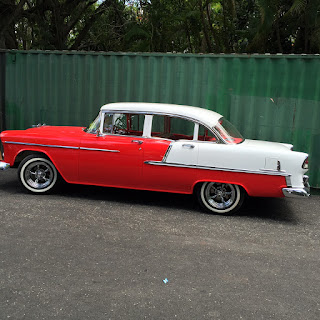 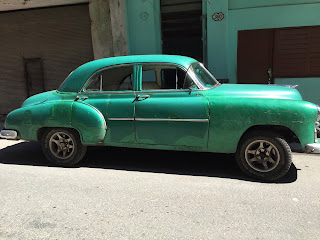 I could have taken a whole lot more and here's what I learned- most of the most beautiful and lovingly restored old autos are taxis now. If you've ever had any idea of going down to Cuba and buying a '55 Chevy for cheap, forget about it. One of our group talked to the owner of one of the taxis and he paid $30,000 for his several years ago and said he could probably get twice that now.
How, you may ask, can a Cuban taxi driver afford such a vehicle?
Well, according to Ruben, again this is mostly possible with the backing of an American relative. With one of these taxis a Cuban can make far more money than say a doctor or a lawyer and I believe they get to keep their tips. So don't be looking at those beauties as something you could ever buy. They represent an entire business and income to the owners.

If we'd had a little more downtime, I would have loved to have hired a driver to take us around for a little tour in one as one of our group did. He said it was an amazing experience.

So. Time to talk about that part of the trip I suppose, since I've found my way there. I have so many pictures. Please be patient with me but in Hemingway's home I found another of my own personal dream houses and couldn't stop snapping. The Cuban government maintains this house and the grounds as a museum and it is gorgeous. They obviously are very proud of Hemingway's residence in their country, his love for it. And say what you will about Ernest Hemingway, Papa, his style, his lifestyle, his drinking, his overtly macho behavior, his hunting, his wives...
Doesn't matter. He was and remains a very important American author and for good reason. The man led a life. And he did indeed have a way with stringing words together to tell a story which was unique and all his own. 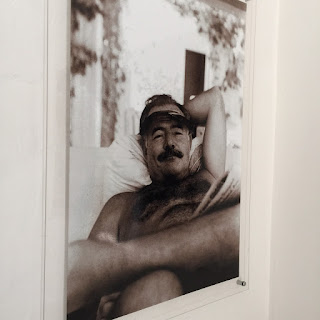 And now that I've been to this place I want desperately to know more about his time there. As with this entire journey, one road leads down another and I could spend the rest of my life learning more about it, trying to answer just a few of the many, many questions I have. 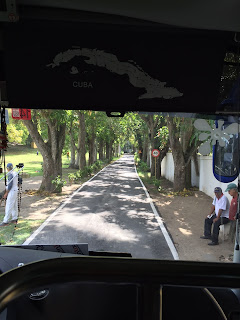 The entrance to his estate. I guess it's an estate. Whatever. As we pulled in, we noticed that a game of baseball was being played off to our left by little boys. You see that guy on the left in the white pants? He's the coach. Don't forget him. He comes into play (so to speak) a little later on in this story.

You are not allowed into the house. You can, however, lean into open doors and windows and take all the pictures you want. You sometimes have to stand there in line to do so, the hot sun beating down on you as people from all over the world take their own photos with phones, with cameras, both fancy and simple. Here are some of mine. 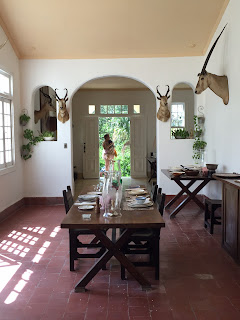 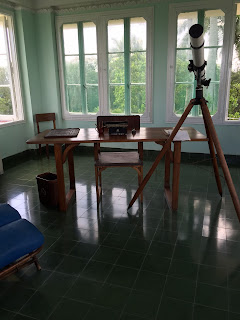 His desk in his writing tower. 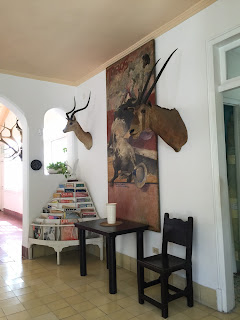 The entrance room. Do you see those magazines? 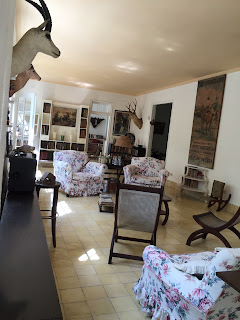 A living room, I presume.

I'm going to have to start part two of this particular adventure on another post because I can't figure out how to get any more pictures into this one.

And it's two-thirty now and I have a few things I need to do around here.
Here? There? Where the fuck am I?
Can I tell you that I don't think I've enjoyed anything so much in forever as sitting here, writing and sharing photos about this trip? I read a quote once about how writers get to live everything twice. The living of it, then the sharing of it. I believe this to be true but I would add that sometimes we get to live everything over and over and over and over again.
Sometimes this is horrible. Sometimes, it is wonderful.
This story, this re-experiencing, is wonderful. For me.