Eternal Mysteries And Other Stuff, Plus, "Mission To Murder" Would Make A Great Book Title

Guess what I realized today?
I know both a brain surgeon AND a rocket scientist.
Does that make me any smarter?
No. No it does not. But oh, how I wish!

I mopped my kitchen floor and the floor of the bathroom which adjoins the kitchen. Also, the laundry "room" (written with great irony). Do I feel better?
Sure.
Sure.
Sure I do.

I talked to my neighbor. She vows and declares that Dot-Dot the killer dog is safely chained and fenced and penned and so forth. That she has let her chickens run the past few days. I didn't let mine out while I was in town but opened the door when I got back after closing the gate to the driveway which I never do. Not that the closed gate and gappy fence on this property would keep out a dog on a mission to murder but it might slow him down. And there's also the possibility that there are two other dogs in Lloyd that are loose and killing chickens. Fuck if I know but it sure is nice to see my babies out in the yard, pecking and scratching. The surviving Barred Rock and two banties wouldn't even LEAVE the coop for a long time. I am pretty sure that the Barred Rock is a rooster. He's growing tail feathers and the beginnings of a drape.

Lily and the children ended up running errands with me today. Lily even drove me. And we met up with Hank at El Patron for a lunch and it was fine.
Here. I got to kiss the baby. 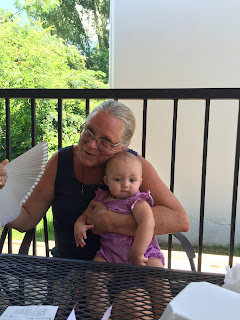 And squish her up. Isn't she gorgeous? Owen has lost a top tooth and he's mighty proud of that. He pulled it himself, which is what he does. The big guy tooth is already coming in and it looks huge, as the adult teeth do when they grow in. I looked at his hands today and he's just getting so big. They are not baby hands at all anymore. They are boy hands. I just got a text from Lily saying that he tried to run away this afternoon because she made him practice reading. School is starting in three weeks, which is impossible to believe. I asked Lily if he'd packed his leftover chicken wings from lunch and a change of underwear.
Haven't heard back on that one yet.

We had a new waiter at the El Patron today. His name was Mannie and we approve. He laughed at our jokes and brought us extra salsa.
"It's like you know us," said Lily.
Gibson greeted him by saying, "Sir! I want cheese sticks!"
I liked the "Sir" part.

I picked the few okra that were ready today. 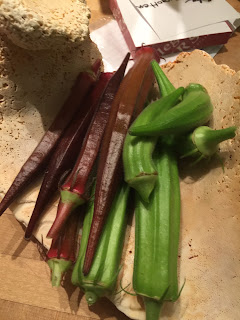 Aren't the red ones pretty? The garden is just so depressing. Something (a blight?) has killed all the tomatoes, the beans have aphids. The sweet potatoes are still alive though and I've never grown those before so I need to do some research to see when to pull them. I think they have to stay in the ground until first frost. Or that may just be true for more northern latitudes.
I'll look it up. It sure would be nice to get some.
It's time to start thinking about the fall and winter garden which is always a cheerful thing to do.

A rainstorm has suddenly come upon us. It's pouring from the sky, great sheets of water slapping the ground. What a blessing! The air temperature has dropped dramatically but in the time it's taken me to write this and go start some zipper cream peas, the rain has just about passed and what will remain is the moisture-saturated air, the humidity which shall torment us again tomorrow. I swear- this is just a hard time of year and it always is. I have a bug bite of mysterious origin on one foot which is itching like fire, a trail of blood from some wound I got going down my leg and a fierce rash under my left bosom. This is the way of it. I do not think that earth is our native planet sometimes. The allergies, the fungi which plague our skin, the way gravity bends our bones and stretches our joints as we age. Where, oh where did our alien foremothers come from who combined their DNA with that of the early primates?
I do not know.
Or perhaps we should just regrow our gills and return to the ocean.
It's all a mystery to me. The beauty and the beast of it all.

Perhaps if I were a brain surgeon or a rocket scientist, I would have more answers but I am not and I do not but the air smells delicious and my peas are simmering and my floor, for this second, is clean.