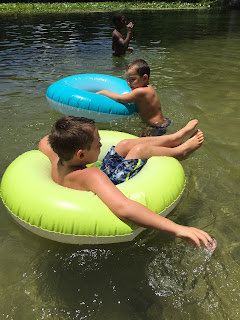 Just as the cheetah doesn't know who she's going to meet down at the river where she goes to drink (a wildebeest? a hyena?), we never know who we're going to meet when we go down to the river to pray.
I mean...jump in and cool off.

Today we were greeted by a little boy holding a frog that took two hands.
"You wanna see our frogs?" he asked. He was so excited.
"Oh GAWD no," I said, doing my best Bette Davis impersonation.
Turns out that someone had given him and his crew a whole cooler full of frogs. Live frogs. Let me make that clear.
"What are you going to do with them?" I asked. I knew the answer and yes, here it came- "Eat 'em!"
Fuck me. Of course. I know that frog legs are a delicacy. I also know that I won't be eating any ever in my life unless the End Times happen and somehow, that's the only protein left on earth and someone else catches them and cooks them and offers them to me with some sort of delicious lemony sauce on the side.
Gibson advanced on the boy, his pudgy little finger out.
"Can I touch it?" he asked.
The boy graciously let him touch it and Lily graciously thanked him but we turned him down when it came to seeing ALL of the frogs. Which would pretty much be my idea of hell. A cooler full of live frogs? Thank goodness Hank wasn't there. He would have passed out.

There was an African American woman set up under an umbrella who would not have looked out of place on a fancy Caribbean resort beach. Her hair was perfect. Her jewelry was perfect. Her white cotton-gauze outfit was perfect. Her make-up was perfect. She was obviously a queen.
There were at least five children there who appeared to belong to her care with skin as dark as hers. One of them was a gorgeous budding young woman who was accompanied by a young, skinny, darling white kid who had to be the young woman's boyfriend. They all played together tossing a ball back and forth and when the Queen Mama issued a command, they all obeyed. They were the most well-behaved kids out there today. The yearning of that boy and that girl for each other was palpable and sent me back to my teenaged years. They watched themselves though, reserving touch to the most innocent of hugs.

A boy named Xander or Zander, perhaps, made friends with Owen and Gibson. A little guy named Richard who floated around in a tiny inner tube made friends with me. He was skinny as a match stick and his eyes, blue, and black-fringed, were the biggest things on him.
"You have beautiful eyes," I told him. He already knew that.

A group of guys of all ages and sizes played a game of toss the football on the grass. A skinny little girl climbed the cypress tree as high as she could and took the rope and swung way out over the river and dropped. A woman sat in a chair and read a book on her Kindle. Gibson chatted up a beautiful older woman who might have been Asian as she knelt in the cold water. And Lily and I dipped and played with Maggie in the river. Maggie loves the river. She kicks her feet and doesn't complain at all about the chill. 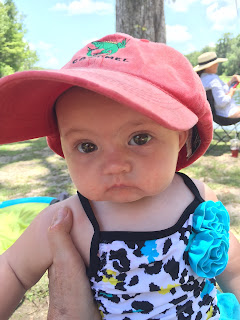 When it came time for us to eat our sandwiches and watermelon, she sucked all of the juice out of a piece of watermelon and cried for more when it was done. 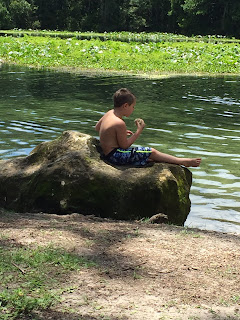 Owen ate his sandwich on a rock which he claimed as his own today when he wasn't swimming.

It was a beautiful day at the river as they all are.

We finally packed it up to go home. Lily is working tonight and so had a time limit. Here's Maggie, getting changed out of her bathing suit, laughing at her mama. 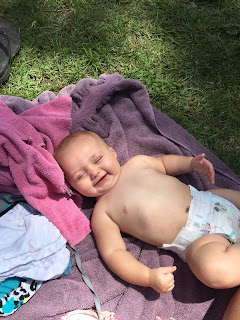 The whole time we were at the river I kept thinking that if miracles were real, I'd get home and the AC would be working. We pulled into my driveway and I saw no sign of AC guys and I despaired but what are you going to do? And then, just as Lily pulled out of the yard, I got a text from Mr. Moon that the AC HAD been fixed and that he was on his way home.

I rushed around the house, closing windows. I lit a candle to the Virgin (okay, no I didn't) and eventually, I took a little nap on my bed with Jack smushed right up against me and it was heaven and it is heaven and I can cook our supper without passing out and I am so grateful and so glad. 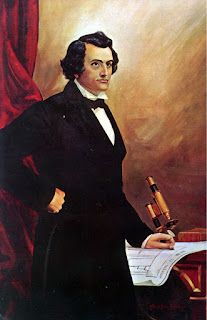 St. John Gorrie, I love you, I adore you, I honor you with ice cubes and a thermostat set at 77 degrees. If not for you, I'd have to live in Vermont.

And that's been my day. I'm about to go cook some stone-ground grits and those defrosted bream. My twenty-year old microwave finally warmed up its last leftover two days ago and I am rearranging the kitchen to fit in the new microwave I bought at Costco yesterday. It fits under the counter which the old one did not and so it's a whole new world in that kitchen.

I will sleep with my husband tonight in our own bed, both of us cool and happy.

I got nothing whatsoever to complain about. And so I won't.