Be Fruitful And Multiply, Plus Recipes 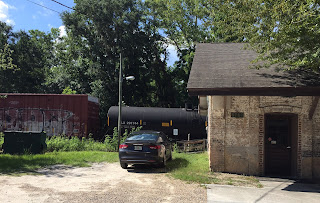 An odd day here in Lloyd. For me at least. That picture doesn't represent anything unusual. Train going by the post office.
But when I got up this morning to what I thought would be an empty house, I found my husband in the kitchen.
"What are you doing here?" I asked him.
Thank god I don't have a secret lover, right?
Poor man. He'd gotten sick in the middle of the night up at the lake house of his friend and decided to come home. I believe he had the same thing Owen had. Symptoms were the same, i.e., puking.
And get this- when he did get home at like 4:30, he didn't even wake me up to tell me he was here and to let me take care of him!
"Why not?" I asked him.
"I didn't want to scare you," he said.
"I only would have been scared for a second," I told him.

He claims he's feeling pretty good right now though and says he'll be going into work in about an hour. I don't like this idea because he's actually laying in the bed which is something he never does during the daylight hours unless fooling around is involved. He hasn't puked since last night but still...
I made him what my mother used to make us when our tummies were recovering from the pukes. We called it egg-in-a-bowl.

Soft boil two fresh eggs. You want the yellows still liquidy but the whites solidified.
Make a piece of toast. Butter it well.
With a spoon, take the eggs out of their shell and put them in a bowl. Tear the buttered toast into little bits and mix into the egg. Salt and pepper according to taste. Serve with a gentle kiss and a great deal of sympathy and a nice cold glass of ginger ale.

I hear that Owen is doing better and has had a cheese toast. He doesn't like eggs. Gibson does and when we go collect them, he wants me to cook him one right away which I generally do.

This is what I had for breakfast: 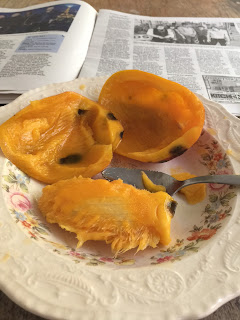 How To Eat A Mango

(Note: this is just one way to do it. However you eat a mango, as long as you get the fruit into your mouth, it'll be fine.)

Hold the mango upright on a cutting board and with a good, sharp knife slice it down on both sides of the seed. Get a grapefruit spoon and with that, eat the flesh directly from the skin of the two mango bowls you have created.
Hold the seed and suck all of the flesh off of it.
Here. Let Maggie demonstrate: 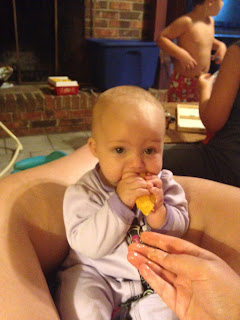 There will be juice and many recommend that this part of the process be done over the sink. Or the hand of a mommy. At the very least, a napkin should be involved. Or a paper towel. Or a dish towel. Or a towel-towel. Something absorbent.

Sometimes when I eat a mango I just feel like it's a food that humans really shouldn't be allowed to eat. It's just too...ethereally and exotically delicious. If I had to put my money down as to which fruit Adam and Eve ate to get kicked out of the garden, I'd bet on the mango.

Speaking of forbidden fruit and sex and stuff, I hear (thanks, Jennifer!) that Sir Mick Jagger (and boy, did Keith give him shit in his memoir about Mick accepting that title from a government which relentlessly stalked, arrested and incarcerated them for years) is going to be a father for the eighth time. His 29-year old girlfriend, an American ballerina named Melanie Hamrick is reportedly three months pregnant and they are "taking the news in their stride."
Mick is 72 and has seven children, five grandchildren and one great-grandchild. Yes. I imagine by now he would be taking these things in stride.
Look- you gotta give the old guy credit. And I am not surprised at all. He can do things with his hips that a boy of eighteen would be proud of and, well, one thing does lead to another.

I am not discussing what happened in Nice last night. I don't have the heart. And there's nothing I can do about any of it and I don't pray. Of course I'm horrified and feel great sympathy and pain for the victims and their families but the world is crazy and I'm just trying to hold up my microscopic portion of it the best I can which, at this present moment, seems the best I can do.