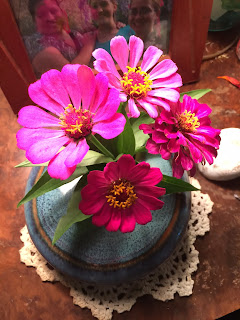 Saturday evening and I am firmly in Lloyd, listening to Garrison Keillor's swan song on Prairie Home companion. I've busied myself with the garden this afternoon a little. I weeded, I picked green beans which just keep coming. I've sprayed those nasty bugs on the peas with soapy water with rosemary oil in it. I've picked those zinnias, all from volunteer plants, reseeded from last year's planting of them. And I've made Mr. Moon's favorite dessert for a belated birthday treat from a recipe that I alter completely. This recipe came into the marriage with him and it calls for things like Cool Whip and instant pudding so of course you know I change it. I make my own chocolate custard, stirring milk and eggs and chocolate over a double boiler and I whip heavy cream and I add sugar to the crust which is made of butter, flour, and chopped pecans. I have told my daughters that if I die and Daddy remarries, they must give the recipe to his new wife and if they like her, they can tell her the changes I made and if they do not like her, not to say a fucking word.
And who knows? If he does remarry, should I die, his new wife might be a better cook than I am.
I hope not. I'd rather she be younger and cuter and a terrible cook.
I'm mean like that.

It makes me so damn sad that this is Garrison's last night on Prairie Home. I can barely stand it. My Saturday night ritual for so many years has to been to listen to the show while I cook Saturday night supper. Maybe there will be podcasts of the old shows. Perhaps not quite as pleasurable but better than nothing.
I suppose.
Life just keeps changing, doesn't it?

I'm going to string and snap those green beans and listen to the show now. I'm going to make some cornbread and I'll cook the beans with some of the potatoes we grew. Jason sent over some pork he smoked and pulled and I might heat up last night's okra and tomatoes too. A very, very fine summer meal.

And I'll get back to Cuba later. Until I do, here's a picture from our last meal at the Artist's Pub. Lis and I again got there first and we had a coffee and then both of us tried a new rum. 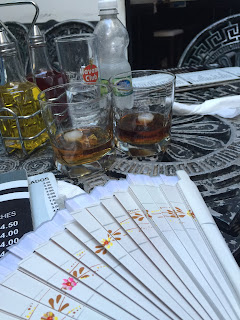 A fan, a menu, the oil and vinegar for salad, rum, a bottle of water, the prospect of one more delicious Cuban supper before us.