A Most Excellent Adventure Visit 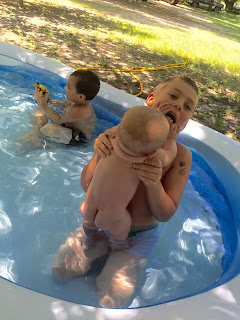 My babies! Mr. Moon set the old pool up and scrubbed it down with bleach and fun abounded. The boys had a great time and then we discovered the Slow-mo video on my phone and I made videos of them doing ridiculous things in the pool with water slowly rising up and cresting and crashing and it was all highly entertaining.
"More, Mer!" they shouted, until finally I said, "No! That's enough!" For once, they took me at my word and went on with their crazy Sumo-Boy-Puppy-Water Play.

I got a few nice pictures of our Magnolia June today. She's at such an adorable age. Plus...she's adorable. Her Boppy sure thinks so. 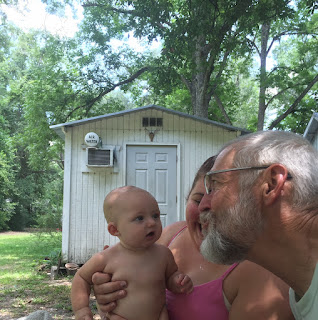 Here she is sitting in the high chair for the first time, eating some zipper cream peas with rice and then some watermelon. 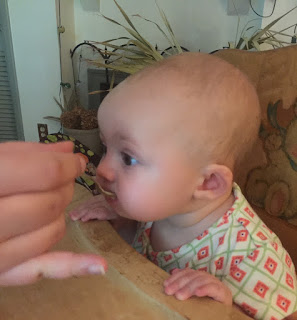 First the peas and rice mushed up from a spoon.
That was okay but she wanted to do it herself. 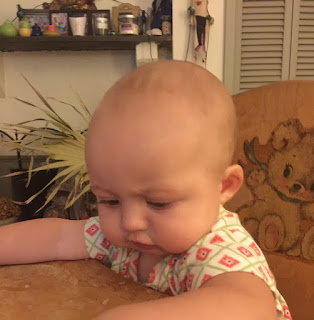 That's her, working intently on getting the tiny pieces of watermelon to where she could get her mouth on them. She doesn't really have the pick-up-and-grab-and-put-directly-into-mouth thing down yet.
It's a process. And she's determined.
Meanwhile, the boys ate (and this may not be a completely complete list): toasted cheese sandwiches, watermelon, pineapple, energy bars, crackers, bread, Chex Mix, more watermelon, and large dill pickles.
When Gibson saw the giant container of cut-up watermelon he said, "OH MY GOD!"
He was so happy.

While Lily and Maggie were taking a little snooze on my bed, the boys and I played Battle and then the matching game. Then they played a hunting Wii game with their grandfather which I disapprove of and which they love.
After that, Owen wanted to clean. He went searching for the rubber gloves which I bought a long time ago specifically for him to use when he cleans. He gets in these moods occasionally and I do everything I can to encourage them. He decided to tackle the library. Unfortunately, he did not get finished and we are under strict orders not to go in there because until he finishes, THE LIBRARY IS CLOSED! 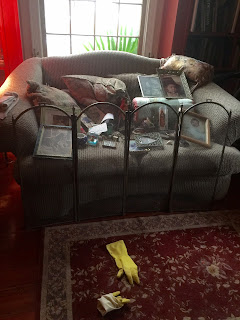 And you can see why. He has taken everything off the mantel and is in the process of cleaning it all. They're coming back on Wednesday so hopefully, he'll get that part of it done so that we can use the love couch again.

Now- let me add that all of these activities were done with the boys in the nude. After playing in the pool (and having a long, warm shower where I'm sure they used up most of their grandfather's body wash) they decided to just be naked. Naked cards. Naked matching game. Naked Wii game. Naked egg collecting. Naked library cleaning. Except for the gloves, of course.

And so it was a highly entertaining day and it made me so happy to know that Lily was getting a nice nap with her baby girl who loves to sleep on her mama because Lily has worked the last four days and needed some rest. And Boppy and I got so many hugs and kisses and when they went to leave and we went out to kiss them and bid them good-bye, Owen hugged me hard and said, "I love you so much."
And Gibson told his Boppy to "kiss the girl" and his Boppy did and Maggie was in a fine and merry mood after her nap and waved her arms and feet and smiled and I just can't imagine a Sunday much better than the one we've had. We didn't get a damn thing done and there ain't nothing wrong with that.

I'm going to go cook some pasta and heat up some venison spaghetti sauce and make a salad and I do believe I'm going to Sunday Sin and make a pineapple upside-down cake too. Haven't done that in forever. I told Mr. Moon that I was going to make one and that if he wanted any ice cream on it, he'd better get his ass to the truck stop and buy some and he said that he was sure he'd be fine without it and I said, "You say that now..."
And he laughed.

And by the way- when a train was going by this afternoon, it suddenly screeched to a stop and is still there, right behind my chicken house. If I were a graffiti artist, this would be such a prime opportunity to go tag a car. The sad thing is, is that a major road is blocked.
Another Lloyd mystery. Luckily, it does not cut off our route to the truck stop in case ice cream is suddenly needed.