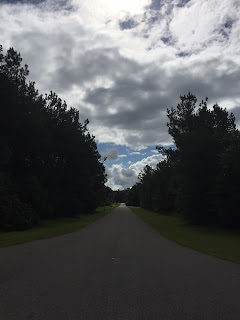 The sky this morning when I took my walk was powerfully dramatic. I got out early enough to not-die but oh, how humid it is.

I took the new sidewalk down to the truck stop for the first time today. 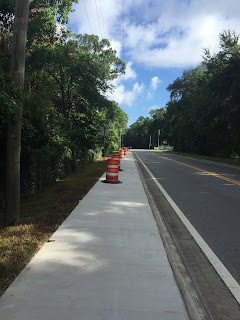 A small step for Lloyd which makes our steps safer. I am grateful for that trail of cement. Farther on down, a crew was still working and the youngest guy was doing a full-on Michael Jackson dance, his work gloves standing in for Michael's bejeweled one. He knew I was watching and performed just for me and then tilted his head with a grin as I passed. I gave him a grin back. He was lovely.

When I got off into the woods, I saw this. 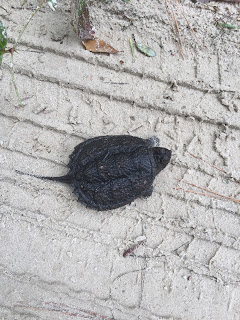 A tiny baby snapping turtle and he did not look pleased with the world but what turtle does? Unlike the dancer, he completely ignored me and when I recrossed the trail where he had been, he was gone to wherever it was he was going.
And then this. 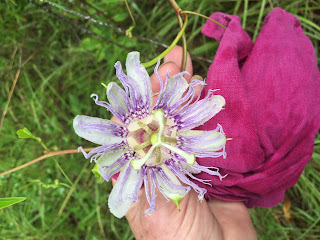 The passion flower which looks to me as if God was drunk on red wine and giggly when he made it.

Have you seen any of the clips of Michelle Obama's speech last night?
That woman.
My god, I am going to miss that family in the White House. Those little girls she spoke about, growing up in that house built by slaves. As horrified as I am right now at the popularity of a fear-mongering, hateful, bigoted bully, her presence on that stage gives me hope that this country does get some things right. That we can grow, can change, can see and support that which is intelligent and thoughtful and reasoned.
Well.

I can't let the day go by without mentioning that Mick Jagger turns 73 today. He has a new album coming out soon, a tour planned, and of course- a new child is on the way. Here's a Stones song that sort of sums up a lot of how scary the world is feeling right now.

Baby won't you dance with me?

Oh hell. Why not?