Attitude And So Forth 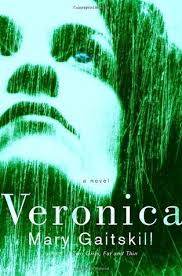 Yesterday as I worked outside I was listening to that book. I had to give Mary Gaitskill credit for her writing, for the gritty realism presented through the story of a former model whose life has been in a downward spiral for quite some time.
Finally, last night, I just couldn't take the grit or the realism any more.
So I downloaded this. 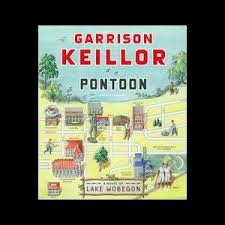 I started listening to it this morning and, well...sigh.

And before anyone jumps on me for not being able to deal with reality, let me just point out that "Pontoon" starts out with the death of an eighty-two year old woman and there are books and chickens and unhappy children and disappointment and post-menopausal sex and things that are far more real to me than what Ms. Gaitskill writes about in her book where the realities include S&M clubs in Paris in the 80's. I think it was the 80's. Whenever it was, it was mighty sad.
And I'm very glad that's never been my reality.
I'll probably go back to "Veronica" but for right now, today, on this hot and sunny Sunday in North Florida, I'm happy to listen to a story about a woman who, when she reached the age of 80 quit worrying about things like a sagging porch.
"That makes two of us," she says, and gets on with her life.
And of course, it's read by Garrison himself which is perfect. When the woman's daughter finds her mother dead in her bed, she immediately wants to call someone to say, "My mama's DAID," and the way Mr. Keillor says it is the way I'm sure he heard it when he wrote it and what could be better than that?

Well, onward.
I think Lily's coming over with the kids and Mr. Moon is setting up the kid pool where I used to sit with Owen in my lap when he was a baby.
I stole this picture off of Facebook this morning. 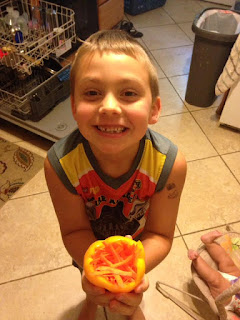 The child can't quit eating and what he's holding there is what he requested his mama fix him this morning which is a pepper with carrots grated into it. Hopefully, he can make a dent in some of the fruit around here. He's growing so fast and so are his brother and his sister and it's a joy to see but heartbreaking at the same time and as they grow up, I am growing old, and it's...interesting.

Give me something with a twenty-year warranty and I'll say, "That'll do and may be excessive."
Send me to take the trash and I'll remember everything except the trash in the actual trash can which needs to go. Put me in a hallway and I won't remember where I was headed or for what purpose. I can take my earbuds out of my phone, set them someplace while thinking, "It'll be easy for me to find them here when I need them again," and an hour later when I do need them again I can remember the whole thing except for where I put them.

Oh well. As long as I can read a book and remember to feed the animals and how to cook peas and rice and do the laundry, we'll be okay. I get pretty good exercise, wandering around this spread-out old house trying to remember where I was going and why I was going there.

Thankfully there is Google and I am grateful for that instant method of trying to remember the name of something I have forgotten and then there's always the old-fashioned thesaurus, even though I may use the one on my laptop. And a husband who, unfortunately, understands my forgetfulness completely. I wish I would stop losing things though. I took my go-to bathing suit to Cuba, never once used it or even took it out of the suitcase and now I can't find it for love nor money. I also lost the guava seeds I carefully wrapped in brown paper and hid in order to smuggle in and I blame Lis for that because as I was doing it I told her, "Remember where I'm putting these," and she can't.
Okay. I'm not really blaming her.

And we're not even going to get into the discussion of how the simple act of cutting my toenails can give me a cramp in my side.

God. It's pathetic. You spend half your life just yearning to grow up and do grown-up things and then you do and you are and you take a breath and suddenly and without warning, here you are having difficulty getting down on your knees to get a pot from under the counter and by the time you get back up with it, you can't remember what the fuck you were going to cook in it.

And I'd far rather laugh than be horrified although sometimes it's impossible not to be.
Horrified, that is.

And I suppose that's why I like "Pontoon" better than that other book where the woman was beautiful and had crazy, wild experiences which have resulted in vast and life-threatening and soul-sucking problems as she reaches her LATE FORTIES and has very little reason to laugh and a great deal to be horrified about.

I better go clean up from breakfast as the boys will be here soon and want some lunch.

And that's the news from Lloyd where the women are strong, the men are good-looking and the children are always hungry.