It is so hot today. I've hung out two loads of laundry on the line and although the garden is screaming for me to get in there and get things done, I believe it would be suicide-by-heat (to continue our theme here today) to do so.
So I'm going to try and get closer to the end of this Cuba trip today, sitting on my back porch with the fan on me, Maurice snoozing away on the other end of the table. Mr. Moon is working outside, bless his heart. He has suddenly decided that the fence must be pressure washed and I have no idea why. But, once he gets a goal, he must achieve it no matter what or how. I take him water and tell him I love him. I try not to cringe when I see everything he has trimmed around the fence, some of it needed, some of it a little heartbreaking to the woman who planted it all.

This post will be mostly tourist photos. You know- the photos that all tourists are required to take. The photos that thousands of people go home with and look at later and not remember one bit of the significance of. Now someone like Steve Reed can make those photos into art but as the immortal Bob Dylan said, "It ain't me babe. No, no, no, it ain't me babe. It ain't me you're thinking of, babe."
Etc.

Our first full day in Cuba, our darling guide and historian, Ruben, took us on a walking tour of old Havana. We visited several plazas and damn if I can remember the names of any of them. A lot of restoration is going on right now which the Cubans are justifiably proud of. It seems that after the fall of the Soviet Union, support from that resource was cut to Cuba and things went bad. Real bad.
Now see? I could spend about eight hours looking up this very topic on the internet and barely graze the surface. Also, I could identify and give a brief history of every freaking picture I'm about to share.
Ain't gonna do it. Not that I'm not interested, it's just that this is not exactly what my blog is about.
I'm going to pare the photos in this genre I have down to a reasonable number. Okay?
Okay. 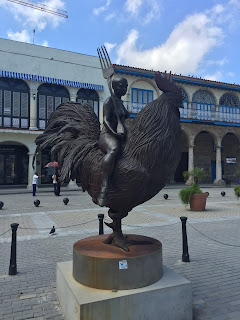 I love this statue. Look at it closely if you want. Very naked, very womanly woman wearing high heels on a rooster with a giant fork. Now you know me and my theory that chickens have done more for humanity than Jesus did and by god, that is how I am interpreting this art work which is by a famous Cuban artist and I don't know his name.
ALL RIGHT! I JUST LOOKED IT UP! HERE'S AN ARTICLE IF YOU WANT TO READ IT! With a much better picture. The artist's name is Roberto Fabelo. I'm sticking with my interpretation. 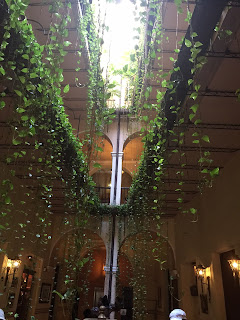 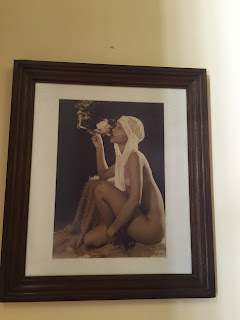 Picture on wall of same hotel. I think. I just love that picture. Again- no idea of the artist or the significance. Also? This is the hotel where I believe we lost Jim whom we found again later. 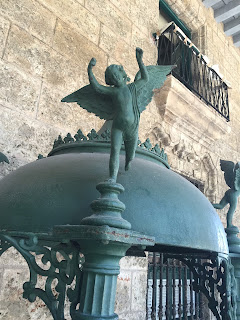 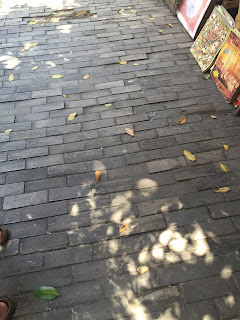 All right. This is cool. Those are wooden bricks and Ruben told us that the reason this particular plaza has wooden bricks is that when the building facing this part of the plaza was a palatial private home, the senora of the casa liked to sleep in late and the sound of the horses and wagons crossing in front of her house on the regular bricks was too ringing, too loud and all of that noise disturbed her sleep. To please her, her husband had them replaced with wood.
I hope this is true because it's awesome. 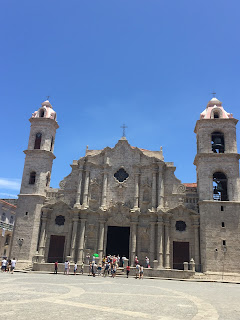 This may be the cathedral where the Pope held a mass when he was in Cuba. Don't put any money on that bet, though. 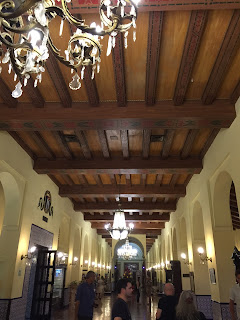 The lobby of the famous Hotel Nacional which is very famous and was not actually on the tour that day and I'm not sure why it's in this group of photos except for the fact that it is definitely a tourist photo. The hotel is very grand, very beautiful, built on a hill overlooking the water. You can have drinks on the lawn and watch the peacocks as they strut by. 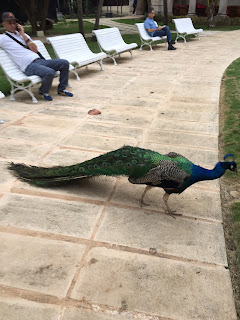 I think it was built by the mafia.
Oh dear Lord. I just had to look up the Nacional. I am going down one rabbit hole after another but this is fascinating stuff, y'all! Johnny Weismuller stayed there! So did a lot of other famous people but...Johnny Weismuller! My first boyfriend! 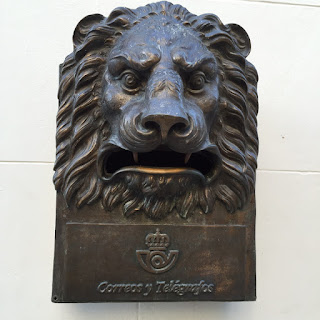 This is a mail slot. Good place to post bills and hate mail, I'd say. 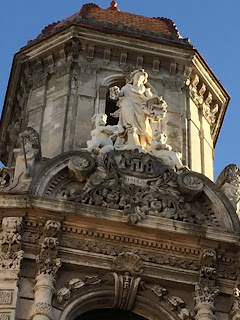 Uh. Something. On top of a building. In a plaza. Yep. That's right. 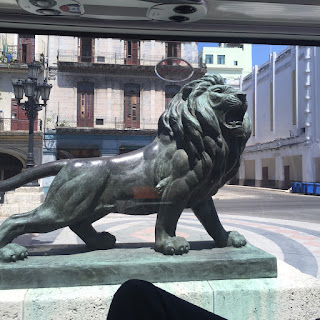 Lion statue taken from the bus. Lis and I always got the front seats because we could. Until the last day when another woman sat her own ass down in our seats! We were astounded! How dare she?
Because Lis and I are ladies, we let it pass.
We will not forget, however. 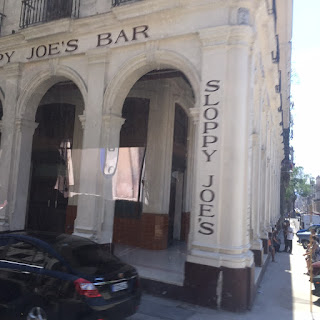 No. We did not go here. Very touristy, I hear, but I still would have enjoyed it. It was recently renovated after many years of being closed. As Ruben told us, one of the things that made modern (relative term) Havana was prohibition in the US. When the sale of alcohol became illegal, Americans flocked to the nearby country of Cuba where they could party their asses off in the bars and restaurants and nightclubs and casinos, imbibing as much of the demon rum as they wanted. Also? Rum runners dared take to the seas at night to bring liquor illegally into the US.
Fortunes were made on both sides of the deal.
Ruben also said something about how prostitution is what originally funded Havana but I forget the context. Pirates seeking sex, perhaps? I would not doubt it. 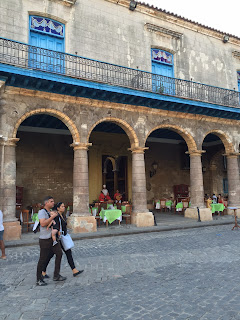 Look! A restored part of a plaza!

Seriously, there is some beautiful restoration work going on in Havana. And it's important work. Some of these buildings date back to the 16th century. I should not make light of any of this. There are arguably no more beautiful buildings in the world than those to be found in Havana. Another small article here, if you are interested.

But here's the crazy thing- the Cuban thing- the sad, sad thing: Get two streets off these plazas where money and effort are being poured into these projects, these absolutely and genuinely critical attempts to salvage and save these irreplaceable structures, and you see things like this: 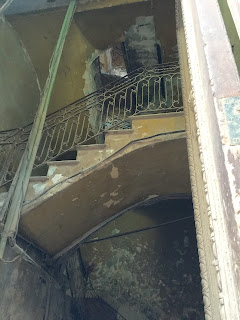 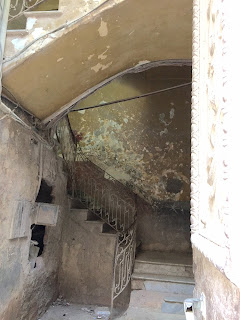 So many examples of time and sun and rain and mold taking down such graceful, lovely places. Lis and I walked past one place where you could see into a dank, dark courtyard where it appeared that many, many people lived in the apartments surrounding it. It looked like a level of hell I can't imagine even visiting, much less living in. I know that after the revolution, all Cubans were guaranteed housing, food, and medical care but who gets to tell whom where they can live? Who gets a nice, breezy place on a lovely street and who gets an airless, crumbling cell?
I have no answers to these questions. I hear that many of these old buildings simply and suddenly crumble and collapse or lose great pieces of themselves to gravity. Balconies drop with no warning. And people die when these things happen.

Some will say that there are always two sides to the story. Two sides to the coin, as well.
But after having visited Havana, I am more of the opinion that we should not be discussing sides at all but onions with their layers and layers and layers of information, history, politics, art, economics, and on and on and on.
Yosi said that these days there are people who, after four days in Cuba come home and start giving paid lectures about the place. That made me laugh so hard. What could ANYONE know after four days in this city which has been touched and shaped by so many cultures, countries, and governments? All I know after my four days is that I don't know enough to know what questions to ask and I had the incredibly fortunate resource of traveling with people who have been coming to Cuba for over a decade and also Ruben, who has studied Cuban history his entire life and who has lived there his entire life.

Here's one thing I do know- the people of Cuba are gorgeous.
My next (perhaps last) post will be about them.

Off to the garden. Hope I don't die.