Uh-huh. That's enough for me.

Okay, so there's a few other things I want to do too. Or need to do. I have a bleach load out on the line right now. More clothes in the washer. Seventeen chickens roosting in the henhouse means the necessity for far more frequent cleaning and changing of hay in there and that should be done.

Last night before I went to sleep I started thinking about Jo's questions on my previous post about us swimming in a river where we know there are alligators. Then I thought about all those fine, fat frogs that little boy had. And that gave me solace- those gators would far more happily catch and eat frogs than try for a human being. Not that I'm going to give this theory a test by swimming at night in the river.
Oh, hell no!
But when you think of the Disney World incident where that little boy was grabbed and killed by at least one alligator, maybe two, you have to think of the fact that the artificially created pond probably doesn't hold much in the way of natural life that a gator would generally eat for his dinner. Gators can cross long distances to search for a new, less-crowded pond to check out. And the ones who were in that Disney pond were most likely hungry and the pantry was low on staples.
This is disturbing as hell, but it's a good example of trying to fool Mother Nature and ending up with results that one did not foresee and which can be tragic.

Anyway, it's another hot day but I have an oasis of coolness in my house again. I slept pretty well last night and had another movie-dream. One of the biggest changes I've noticed since DC'ing my antidepressant is that my dreams are just completely different. This one took place in a giant mall and there was a crime committed (I can't even remember what it was) and I helped solve it. It went on and on and on. It ended up with me pissed off because I'd managed to get the whole report into the newspaper before it went to print and they didn't credit me at all!

Here's a picture of August that Jessie sent this morning. 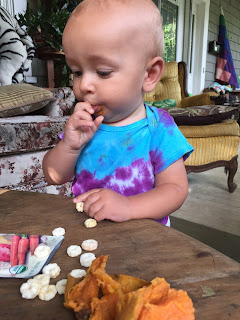 Can you stand the cuteness? Do you think he'll recognize his Boppy and his Mer? We shall see.

And I can't wait to see him reunited with his cousin Magnolia. I can't wait to see them together again. Yesterday Maggie was making blurb noises with her mouth on her arm and I remembered how August was doing this very same thing just a few months ago. As much as I love and honor the reality that August has a whole world of people who love him and that he can explore with his parents, a world that doesn't involve me or Florida or the part of his family here, there is something of the mother bird in me that wants ALL of her babies to be, if not in the same nest, at least in adjoining nests.

I need to get busy and get shit done so I can take a nap.