Well, I lied. I'm going to talk about chickens now.
Can you believe that all nine baby chickens are still alive? And here's a terrible and shameful confession: they do not all have names.
Some of them I really can't tell apart. Here are the barred rocks eating cornbread. Now I think this is a pretty picture of some pretty chickens. 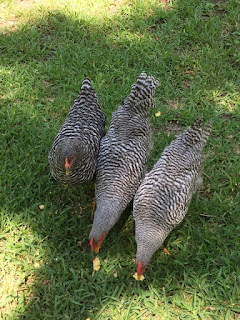 One of them is darker than the others but still- see what I'm saying?
I think they're going to be named after the sisters on Petticoat Junction. Yes. I was born when the earth was still cooling.
So. From left to right- Billy Jo, Betty Jo, and Bobbi Jo.
Billy Jo is darkest, Betty Jo has longer tail feathers than Bobbi Jo.
Fuck. I'll never remember this. 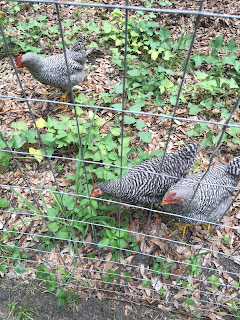 Here they are in the garden, helping me with insect and weed control. And, uh, that's Billy Jo in the middle. 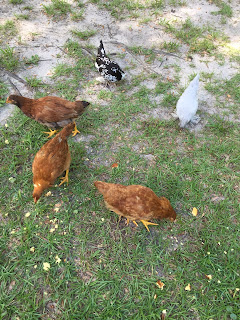 Here are the three red chickens and two of the banties. Do you remember when my next-door neighbor asked me to take the red chicks? Remember the little one whose foot was all curled up and we put the bandage shoe on it? So one of those is darker too and I'm not sure you can tell, but is starting to show some of the black lace trim of her/his grandfather, Elvis. Whichever one of those chicks is the smallest and lightest is Lucy for Lucky Lucy- the one who had the funky chicken foot. The other two, for the moment, shall remain nameless. 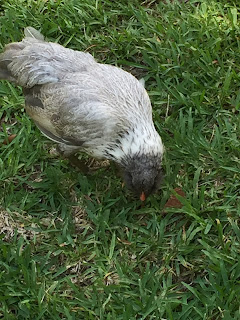 Here we have Dearie. I think. Or, Deerie, as the case may be. Look at the beautiful patterns on this bird! Isn't she a pretty little thing? 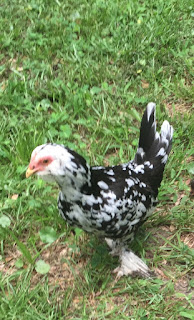 Here's Blossom. Not a good shot. Blurry. Sorry. She moves fast. But would you look at the crazy patterns of that one? And the feather-feet? 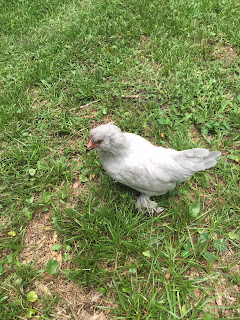 Pretty little Violet, whom I did not think would live through her first night here. Her feet are feathery too.

And that is all of the young'uns. I can't help but think that the barred rocks will soon begin laying. Maybe the banties, too. The red ones have a way to go yet. I have no idea if any of them will turn into roosters. At this point, I don't see any overt signs pointing in that direction.

Mr. Moon is in his chair in the Glen Den, resting. I ran out into the rain to take a picture of him pulling up to the burn pile in his truck which was loaded down with the trimmings he did today. 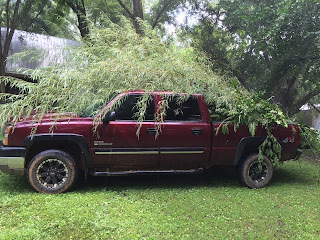 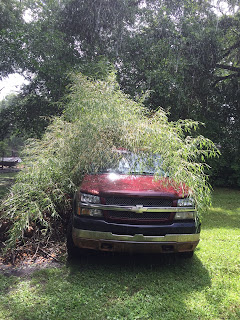 Damn bamboo. He worked so hard. Too hard, really. It's been brutally hot.

I'd love to start watching some of the new season of "Orange is the New Black" tonight but we can't find our Roku remote for love nor money. How sad is that?
Pretty sad.
Last night we happened onto one of the first episodes of the newest season of the "Great British Bake-Off" and that made me so happy. Such sweet people making such sweet cakes. Mary Berry or whatever her name is, is not that sweet though.
"The sponge is dry and tasteless!" she pronounces with great vigor, and the person who baked that particular sponge wants to die, I can tell. And the poor guy who tried to slip beet juice into the Black Forest Cake! The horror! The shame!
Don't try that at home, people.

And I am caramelizing onions and am about to cook some venison back strap. It's been a good day. I've had a good time writing away and looking up things on the internet about Cuba and then doing some weeding in the garden with the assistance of my chickens.

Life in Lloyd is fine tonight. I hope it is where you are too.