Sinners Can Be Winners!

I was walking past a house where a woman lives who is the daughter of people I know who have a Trump sign still in their yard. I got to thinking about something the mother had said to me once about one of her children or grandchildren getting pregnant without the benefit of marriage and she shrugged it off, made some slight joke about it, and of course I do not judge whatsoever about a child being born out of wedlock, as we so priggishly used to say. The family is quite church-going, though, and also have a religious sign in their yard and it all got me to thinking.
It has been such a conundrum to me that supposedly good Christians have supported Trump so enthusiastically even with his admitted extremely ungodly like actions towards women, his affairs, his three marriages, the women who have accused him of sexual harassment and assault while they hated Obama who has lived, relatively speaking at least, a very straight and narrow life, especially when it comes to marriage and fatherhood and respect for women.
Of course here, in the south, race plays a huge part in that and I am not going to try and pretend it does not.
Still, though, one would think that a man like Trump would be at least not a favored candidate for those who proclaim to follow the Bible and the teachings of Christ.
But then it hit me- these people all have had failings when it comes to living in a Christ-like manner and they know it. We all do, but for those who claim to be Christians, it must be an even darker burden, knowing that they have failed to live up to what they say they so strongly believe in. And then here comes Donald Trump who, even though it is quite apparent has absolutely no inclination towards religion, says he does. Says that the Bible is his favorite book, after the one he hired someone to write about himself, of course. And in just avowing that he believes in Christianity, just in saying that he reads the Bible, just in courting the Christian religious voter's support by giving lip service to outlawing abortion, he makes himself one of them- as obviously imperfect as any human could ever be and yet still, a believer!
And yet, as Christians are so fond of saying, if you just believe, all is forgiven and your sins are washed away in the blood of their savior and besides that- look at how very, very forgiven Trump is! So forgiven that he has billions of dollars! (According to him.) He lives in a golden palace! He has been elected president of the United States! God has spoken!
Sinners can be winners!
And Jesus loves them too despite all of that silly talk about the camel and the eye of the needle.

Well, I could be wrong about all of this. Not that that's ever happened before.

And on that cheery note, I am going to go tend to household chores and then sit down to sew a pretty rose and bluebird print flannel dress for this incredibly delicate and feminine little girl. 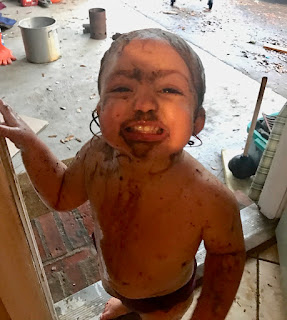 Doesn't she look like a miniature Bandita? A small, gleeful, wicked Pistolera?

She don't care 'bout no Jesus and would much prefer to be washed in mud rather than blood.
Oh, how I love her!