Cold, Wet, And As Owen Said Today, "I've Used All Of My Weapons On My Friends" 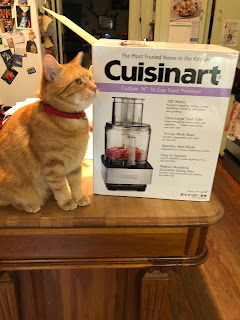 About two weeks ago my thirty-year old Cuisinart food processor finally and completely died. Well, actually, the motor runs fine but the little plastic pieces on the bowl lid broke too much for Mr. Moon to fix and things flew off of it and without those pieces, the processor, she will not run.
My food processor is not an appliance that just hung out on the counter taking up space. I used that thing a lot, mostly for chopping and also, for making some types of bread. I use it to puree soups and ingredients for soup. I use it for the Traditional Chicken Salad which I can't believe I forgot to take a picture of this year but I did forget. It basically looked like all of the Traditional Chicken Salads I make so if you've seen one, you've seen them all. And I had to borrow Jessie's food processor to make it. I believe that Mr. Moon's mother put her chicken through one of those meat grinders that you bolt to the table which looked like this. 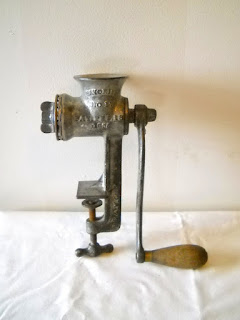 It was, for its time, a very fine piece of kitchen equipment.

However, I do not have one nor do I want one.
I wanted a new food processor.
So we did a little research on-line and found the one we thought would suit my needs best and Mr. Moon found a website that offered them for almost eighty dollars less than the usual price and I thought the whole thing looked a little sketchy but damn if the thing didn't arrive today, right on schedule.
See picture above. Maurice likes the box.

And I guess the message here is- I got a new food processor which is hardly earth-shaking but I am looking forward to using it. I have had to look at several videos for complete instruction because instruction manuals leave a lot to be desired these days and in fact, they advise you to look at the instructional videos to learn how to completely operate your machine.

The boys and I did not go to the coast today because the weather WAS nasty but I picked them up and we went to the Lighthouse Home For Bad Girls Who Get Saved By Jesus because they just did not get enough toys for Christmas. I got them both a toy and also a Curious George jack-in-the-box to keep here for the little ones because who wouldn't want a Curious George jack-in-the-box? It plays the same thing that my old jack-in-the-box played, which was Pop Goes The Weasel but when George pops up, it does not make that horrible sound that scares little children to death and is probably the reason that most of us are terrified by clowns.
Remember this? 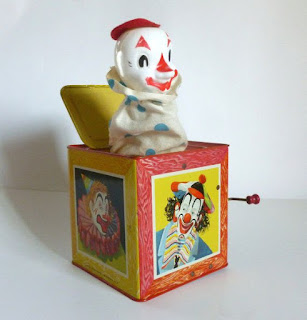 Honey, every time that sucker popped up I lost at least three months of my life-span.
It was awesome! And horrible too.

And then we came home to my house and had grilled cheese and tomato soup and to be honest, the boys mostly watched some kids' Netflix stuff, the rain coming down and making the cold outside chilling to the very bone. We did play the matching game but Owen was sleepy although after the game, they asked to play on the swing porch, and I let them, but the next thing I knew they were outside in the rain and I made them come in and they did not really fight it. There were more snacks (apples and pickled okra, Ritz crackers and peanut butter) but I did not let them have any candy as they have OD'ed on it since Christmas. Jason told me that he'd finally thrown the rest of it away.
I wonder if the boys know that?
Hmmm...
Well, they got none here. I was mean MerMer.

And now they are home with their parents and their sister and I am extending the leftover chicken soup into more soup and it's still raining. I hope we can go down to visit the sea creatures tomorrow. I think that Boppy is going to have to stay home and fix the busted water pipe under the garage. I suppose it broke when we had that freeze a few weeks ago which is sort of depressing. It's going to be freezing here again soon and that does not make me happy. It's going to be a REAL freeze. A HARD freeze. And for us, that is just, well, annoying as fuck.

And that's what happened in Lloyd today.
What happened where you live? Is it cold? Is it warm? Is it snowing? Is it balmy?
What are you having/did you have for supper?
I'd like to know.