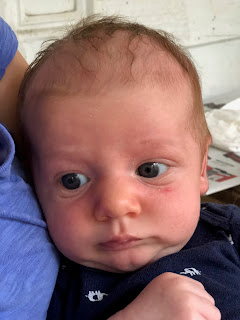 Nobody can ponder like a baby who faces every experience, every moment, every single situation and visual image with a brand new and unsullied perspective. Handsome little Levon has this pondering thing down. Also, he loves to be sung to. This is good because we are a singing family and his mama sings little songs to him all day and August joins in on the ones he knows. This entertains the youngest man and it entertains August too. Lord, but it is a beautiful thing to watch a child react to silliness and sweetness with no walls or prejudices or thoughts about what's cool or not cool, what's good or not good, what's expected and not expected. Just purely enjoying whatever happens, giggling at the silliest things.

August went with me to the dump and the post office today and his mama agreed that I could forego his car seat which was in another car and could let him sit on a booster seat which used to be Gibson's, for the entire almost-a-block to the dump and back. Oh, but he loved it so much! He sat so still and when we got to the post office, I said, "Come on, let's go in," and reached to unbuckle his seat belt and he said, "No. I wait in car."
"No you won't," I said, and he was okay with that but I think it's funny that he loved sitting there like a big boy so much that he didn't want to get out. 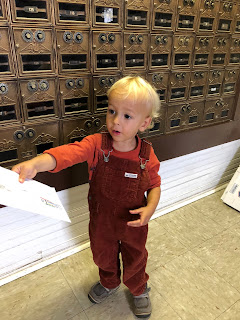 Jessie packed up all of her things today and I helped keep the children happy while she did that. Here's August in the leaves wearing his other pair of brand new overalls, these a rust-colored corduroy. 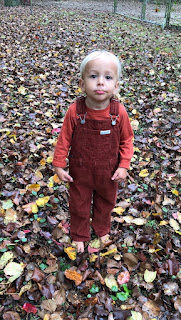 He's posing. Can you tell?

We stopped at Costco on our way to Jessie's and picked up a few things that we needed. August was completely into the samples today. He had bread and butter, cheese, and yogurt. Levon slept in his car seat in the giant cart, mostly.

At Jessie's house we unloaded the car and Jessie said to August, "Don't we have a nice house?" and he showed me his new junior bed made from his transformed crib and we did a puzzle a few times and read a few books and it was so, so, so hard to leave.
I had so much fun with them all the past few days and we agreed that we need to have slumber parties sometimes, when everyone comes over to hang out together and just enjoy each other without necessarily having to do something like grind venison. I never want to forget how August wanted his Boppy to rock him last night before he went to sleep or how much fun it was to give August his bath or to soothe Levon in my arms when he was fussy. That boy does love to be held. And I love to hold him.
This afternoon when we were unloading Jessie's car, August was playing in the front seat for a minute and I said, "What are you doing?"
"Little Boppy," he said.
"Who is little Boppy?" I asked him.
"August."
Love goes back and forth between grandparents and grandchildren and it's sweet enough to make you weep sometimes.

I finally pulled myself away although August wanted to come with me, and I went to Joanne's fabrics and bought some more embroidery thread and a pattern for a Maggie winter dress and some beautiful flannel because it was all half-price and then I came home and did some laundry and tidied up and organized some of my sewing things. Mr. Moon is going to a basketball game and once again, it is quiet here at my house. When we woke up this morning it was about seventy degrees but it's drizzled on and off all day and the cold temperatures are coming in. It's only going to get up to 49 degrees tomorrow and yes, I know, that's practically tropical for some of you but it's fucking cold for us. Time for the Goodwill cashmere. Maggie is coming tomorrow morning while her dad is going to the dentist. Lily is off on a teeny-tiny vacation in Port St. Joe which is a few miles down the road from Apalachicola. A good friend is house-sitting for her parents there and invited Lily to come and stay with her and Jason is taking care of the young'uns. Such a good daddy and husband.
So I'll get to hang out with the girl for awhile tomorrow. I think that dolls will be involved.

One more thing and this is a public service announcement: I just spent about five million hours listening to The Night Ocean by Paul La Farge. If you ever get the notion to read that book either with your eyes or with your ears, just say no. Instead you could get a hammer and hit yourself in the foot for a few seconds and then you could experience pain but it would be over quickly. The novel starts out well and interestingly and then takes a turn and then another turn and then yet another turn and by the time it's over you don't give a shit, you don't care, you don't remember who did what or who pretended to be who and you wonder whether an editor was involved at all.
Or at least, that's how I felt.
In my opinion, a book should not leave you with the impression of THANK GOD THAT'S OVER!

Can you believe that Levon will be four weeks old tomorrow? Jesus. What happened to that month?
I wouldn't believe it except that he's getting bigger every day and has a few extra chins under that beautiful primary cleft chin of his. 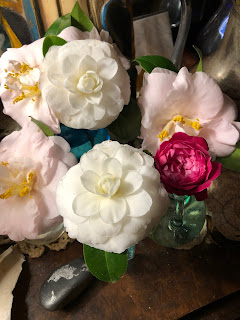 More camellias, plus a rose.