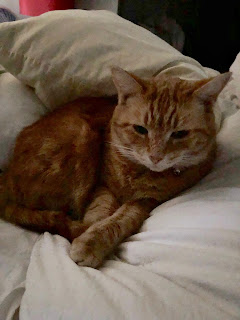 I woke up this morning to a true Christmas miracle. The Great and Terrible Maurice came to greet me in the bed and she presented her butt to me and turned and kneaded as cats do and then settled down beside me and if I put my head up against her chest I could hear her purring and it was amazing and I was so happy to have her there. Mr. Moon came in and said, "It's eight-thirty!" and I said, "I know, I KNOW!" and he kissed me and I kissed him and then he pulled up the sheet on his side of the bed and made it all straight and tidy and I can take a hint and I got up, loathe to leave Maurice alone but ready to get on with this Christmas day because my heart was not sad nor broken and I felt (dare I say this?) cheerful and excited to go see the grandchildren open their presents.

I got dressed and had coffee and we drove back to Lily's house and everyone was excited and happy and I made hashbrowns and sausage and Lily cooked eggs and heated pastries and May and Michael and Hank showed up and then Jessie and Vergil and August and Levon arrived and it was all wonderful. 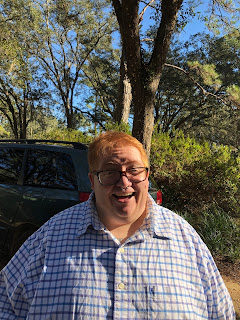 This is what a beautiful day it was and although you can't really see it, Hank's hair was shining like a newly minted penny in the sun.

While we were cooking, there was music on and when Aaron Neville's "Oh Holy Night," came on Lily told Owen, "This was my favorite Christmas song when I was a little girl!" and I did not know that but still have that CD and she and Owen danced in the kitchen together, mother and son, to that angelic voice and I held Levon against me as he drowsed, swaying my body and patting him gently and after about ten minutes of that I felt as mellow and stoned as any old hippie who'd been at the bong for hours.

We ate our breakfast and then the present unwrapping began and yes, it was chaos. I think my favorite thing was when Gibson unwrapped what Jessie and Vergil had given him and Owen both, which were goodie boxes of Yoo-hoo's in cartons, beef jerky, some other things that I don't remember and a full-sized container of PRINGLES!!!!!
Oh my god. You would have thought Gibson had received a gold cadillac!
"My own Pringles!!!!!!!" he screamed.
"Better not pop the top; I hear you can't stop," said May sagely, from the floor where she and Michael were sitting.
"Thank you!" Gibson shouted at Jessie in his Gibson voice which is about the same decibels as a jet.
He was so happy.
And many beautiful presents were unwrapped and our children gave Mr. Moon and me a year's pass to all of the Florida state parks which is absolutely the most thoughtful and wonderful gift I can imagine. I was gobsmacked.

And here is August, solemnly and carefully examining his new farm. 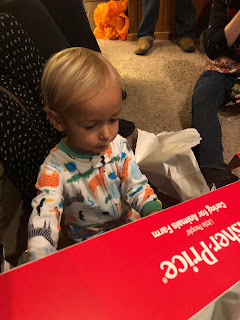 Maggie was wild with the joy of tearing paper off of presents. She got a farm too, of course, and a baby doll and all kinds of crazy good stuff. This is what she'd looked like at 8:00 a.m. 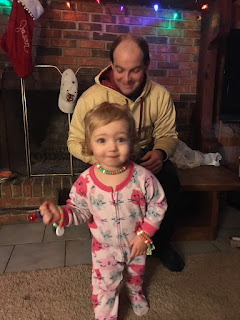 so you can imagine what she looked like by 11:00.
And if that child isn't a baby doll herself, I do not know what a baby doll is. 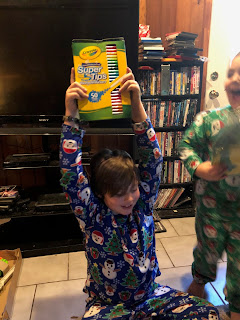 Here's Owen holding up the markers that his Uncle Hank gave him and if you look closely you can see a tiny bit of the joy that Gibson was experiencing when he discovered that Hank had given him a frog backpack THAT HE COULD PUT ALL HIS SNACKS IN!

So it was like that with Levon being the center of calm and sweet joy. 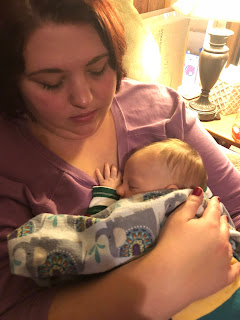 Here's the present that May gave to her brother. 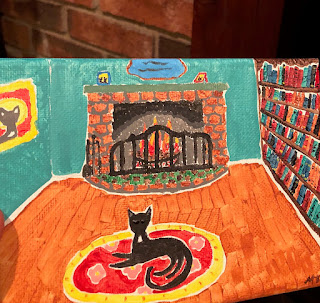 It's a tiny painting that she did and it blows me away. She said she'd always wanted to give Hank a library and thus, she has with Hank's cat Johnny Karate sitting on a rug in front of a fire. "See?" she said. "Johnny laid a fire!" and look at the tiny pictures on the mantel. It's just so perfect in all regards. May is unbelievably talented in so many ways.

And finally, Hank and May and Michael had to leave to go to their dad and their stepmom's house (which is just down the road from Lily's house) for the celebration there and Boppa and Mer took their leave too. I was so incredibly sleepy for some reason but Mr. Moon and I unwrapped our presents for each other when we got home. I got him silly things like flashlights and new underwear and pralined pecans and a bird feeder and he got me rum and dark chocolate and my favorite espresso and...
oh my. 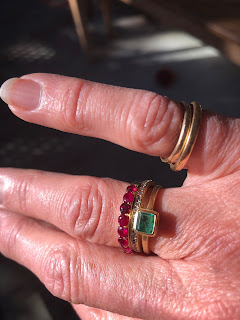 A beautiful ruby ring to wear with my gorgeous Cozumel-sea-colored emerald that he gave me on my birthday a few years ago. I sent this picture to Lily and Jessie, and Jessie said that my hands look like a rock-and-roll pirate queen's hands and I love that. Beautiful jewels on my old hands.
I can't stop looking at the ring. I love it. I even love my old hands, as gnarled and wrinkled and age-spotted as they have become. They have done so much for me and still do from digging in the dirt to making so many meals to comforting babies to changing diapers to holding hands with those I love. If there is one part of me which deserves decoration, it is these old hands.

And so it has gone this Christmas and it has been as sweet as any Christmas I can remember in forever. I'm going to go and cook (with these old hands) some scallops and pasta for me and the sweet man to whom I am married.

Here's Aaron Neville singing "Oh Holy Night" if you have a yearning to hear an angel's voice.

Thank you for being here and part of my entirely fortunate life.