Can I Go Back To Bed Now?

It's not even 9:15 and the Dish guy has been here, supposedly fixed the problem, and gone. His boss will be here later to confirm that all of the trees we have are preventing us from getting the highest of the high definition abilities from our TV due to the trees blocking the satellites' imput.
Or something like that.
But the TV does appear to get a signal when we turn it on now. The problem may have been the HDMI cord having a short in it.

Lot of activity for this early on a Sunday but I'm in a pretty good mood about it all.

Here's a picture that Mr. Moon sent of Owen napping in the deer blind. 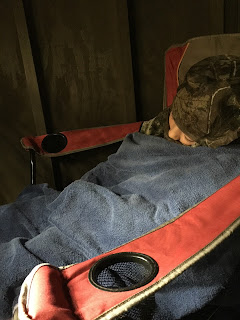 No buck to be seen this morning.

And here's a picture of Levon that Jessie sent me. 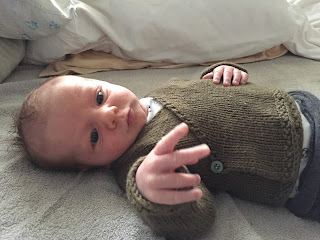 I haven't seen him in days and it's killing me. However, Vergil has to go out of town on business tomorrow and I believe that Jessie and the boys are going to come and spend a few nights with us. I have promised to spoil August and Jessie which leaves Jessie to spoil Levon and that is going to be fun. We can watch ALL the TV! I have promised that I will not make her watch Rolling Stone videos on the giant Youtube.

I try to be thoughtful. I really do.

Anyway, that's it from Lloyd at the moment. Maurice did just attack me fiercely which pissed me off because I shared my yogurt with her not twenty minutes ago. That cat has problems. I believe she slashed me all the way to the wrist bone.
Maybe she just loves the taste of my flesh.

Let's all have a good Sunday, okay?