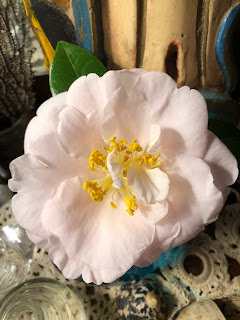 This is one of my camellias which is blooming. Hope you like camellias because you're going to be seeing a lot of them in the next few months if you're a regular visitor. I believe that camellias are my favorite flower with the possible exception of zinnias but in a way, that's like trying to compare oranges and apples or babies and kittens or children and grandchildren or Beatles and Rolling Stones. Zinnias are cheerful and colorful and shout with unabashed hot summer colorful glory while camellias are quiet and works of Japanese and Chinese living art, and their coloration is usually more subtle. This one (what? do you think I'd know its name?) is the palest baby pink with sweet ruffly edges you see there.

I'm just damn grateful to live in a world where both zinnias and camellias exist.

We've had a quiet day here, Mr. Moon and I, once the hunting and TV fixing had been accomplished. I worked on my duvet cover and in fact, finished it, and I wouldn't show those buttonholes to a fish. They look like hell. But. They get the job done and the cover is in the wash now and I can tuck the comforter in it and put that on the bed that Jessie and Levon will be sleeping on. While I embarrassed the very threat and needle I was working with, I watched a few episodes of some BBC mystery series which is really pretty bad. "Death in the Caribbean." It's formulaic to the nth degree ("I smell almonds! She's been poisoned with cyanide!") and the acting isn't great and the nerdy white guy solves the mysteries with his incredible mind but it was just about right for watching while trying to do needlework as it didn't require a lot of attention. Also, the main female character is about the most beautiful woman I've ever seen in my life and that never hurts.

I found this today. 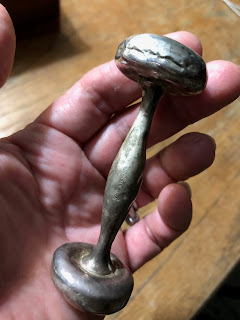 That was my silver baby rattle, given to me, I am sure, by someone on my father's side of the family as they had all the money. My brother Russell repaired it when he was a jeweler and I think I'll give it to little Levon. Why not? He can rattle and gnaw on it to his heart's content as obviously, it's been rattled and gnawed on before.

I'd go out and gaze in wonder at the beautiful full moon but it's so cloudy here that I can't locate it in the sky. A lot of things are like that, it would seem to me- you know that something of wonder, amazing and light-filled is right in front of you but there are just so many obscuring obstacles in front of it that you can't actually see it with your eyes.
You just have to trust that it really is there.