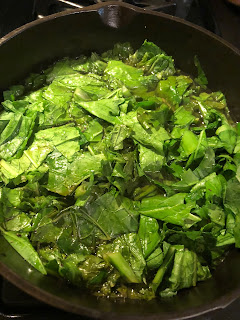 Mustard greens are a bit prickly and when raw, they have a gorgeous bite, a wasabi bite, a horseradish bite. Thus, they are delicious, cut fine and added to a salad. Cooked, they are milder and they are not thick greens and do not need a lot of cooking time but I am from a region where we like our greens cooked until they are spoon tender, and tonight I am cooking my mustards with some collards which are still quite young and therefore, not as tough as they do get eventually, and some kale which is also fairly young. I cut up one piece of bacon and let it cook down a little in one of my favorite iron pots and added sliced onions and then the greens, washed until free of all dirt and grit (mustards are bad to keep sand on them) and then cut longwise and then crosswise. I added water and a vegetable bouillon cube and salt and pepper and some balsamic vinegar and now they are coming to the simmer. Mustards are like spinach in that they, too, cook down to almost nothing whereas collards do not and neither does kale, especially when those greens are mature and more sturdy. Mustards are good greens to go into a quick stir fry with whatever else you're throwing into the wok. They go well with soy sauce, as do all of the greens I know.

We are having those greens tonight and will also have some sweet potatoes and pork chops and this is one of our very favorite meals. I will probably make some cornbread, mainly to sop up some of the broth from the greens and it will all be delicious.

Tomorrow Jessie and Vergil are taking their sons up to Asheville as a dear family friend died and they want to go to the memorial service. I know that I am going to miss them in the week they are gone so I ran by today to get some love to tide me over. August was so excited to see me and that's another thing about being a grandparent- these little people just love us to pieces. It's a special sort of love which is the purest and least complicated I've ever experienced, coming and going. Of course it's all just a trick of evolution to keep us grandparents around and helping to take care of and help provide for and protect these babies of our own children but it works.
It works real well. Adoration does not suck.

August grabbed me by the hand and said, "Come!" but he didn't even really have a plan. He just wanted me to obey him so I did. He ended up going to get books which we read and I also got to hold Levon and he is now smiling, as Jessie says, "whenever he's not crying."
I witnessed this today.
At one point, she was changing Levon's diaper and clothes and she brought him to me, just wearing his diaper so that I could get some almost-naked-baby love, which is the best love there is. I nuzzled his soft neck and smelled his head and touched his soft back and tummy and legs. How I love Jessie for that act of generosity!
We asked August to pose for a picture, holding his brother and when I said I would send it to his Boppy, he agreed. By then, Levon was not quite in the mood but the entire photo shoot only took around eighteen seconds, so it was okay. 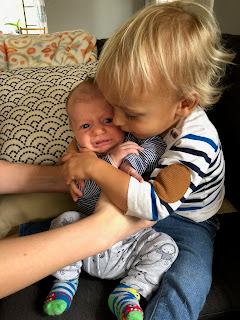 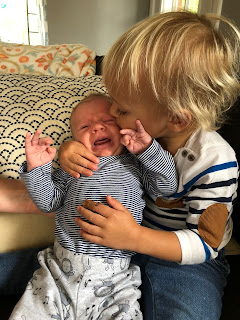 I am most impressed that August kissed his baby brother but he did. Crying doesn't seem to bother him too much.

I asked August today who Little Boppy is again and once again, he said, "August," and then he said something about Big Boppy and my heart just swelled to immense proportions. And just as I was wondering where my husband was this evening, I got this picture. 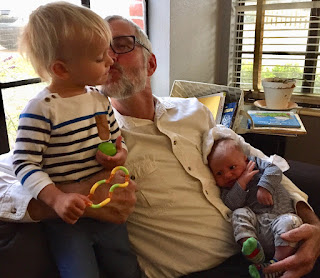 I guess I wasn't the only one who needed a little sweetness.

Here's another picture that Jessie sent me of the two young gents kickin' back. 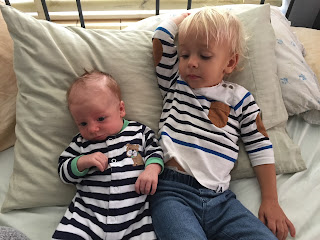 One more picture and I stole this one from Facebook. 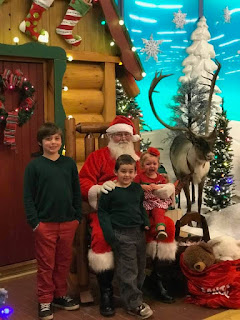 Don't Owen and Gibson look suave and debonair? Doesn't Maggie look like we all feel this time of year? Or am I just speaking for myself?

I've got a 10:15 appointment with my doctor tomorrow and I'm hoping that none of my blood work indicates a terminal illness. Don't laugh- even writing that makes my heart go up into my throat. How odd I am about these things. How completely divorced from common sense and reality.
Well, hopefully tomorrow night I'll be posting again about how much I love my young and handsome doctor. I keep thinking about what one of my friends who also goes to him said which is that going to see him is just like going to see a friend named Dr. Zorn and having a chat.
It's true.
I hope it's a nice chat.
Whatever happens, that particular appointment will be over and done in sixteen hours or so and what a relief that will be. Plus, I'll be asleep for eight or nine of those hours and that's a good thing too.
And then, before you know it, it will be Keith Richards' seventy-fourth birthday. As we all know, Mr. Richards' birthday is a major holiday here in the Church of the Batshit Crazy and there will be appropriate celebration.