Rooster Retification Soon To Be Accomplished

Lily and Maggie and I met up with Jessie and her boys at her house today and then we walked up to the local park, Lily pulling August and Maggie in a wagon and Greta the dog on a leash. At the park the kids played on the playground and Jessie and August and Greta and Levon and I walked a little bit around the park under the beautiful pine trees. August found a walking stick and then he found one for me. It was about seven inches long.
"Touch ground," he instructed me, demonstrating how one is supposed to use a walking stick.
Mmmmm...
It was another beautiful day, still cool but not cold, the sky old-Levi's blue.
After our little outing, we picked up Hank and went to eat lunch at our standard favorite, El Patron where every one of the lunch specials are $5.87 and the food is pretty darn okay and we can eat outside, not to mention that the server brings us many, many chips and dishes of salsa. Here's August, offering me a chip which he has pre-dipped just for my enjoyment. 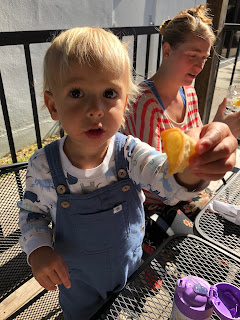 Such a thoughtful lad.

And here's Maggie looking like a movie star in my opinion. 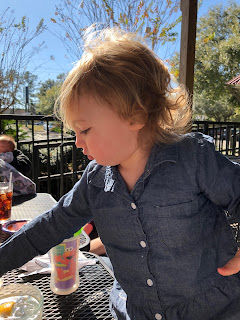 Levon got held and snuggled by all of us and as we all know, Hank holding a baby is about the best thing in the world. 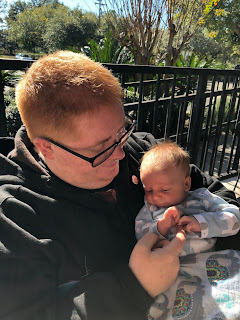 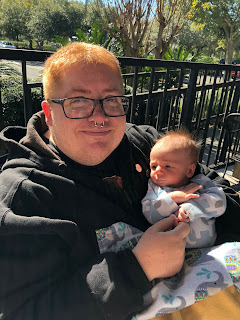 That baby has gained over three pounds since his birth but he's getting so long that he's still skinny. Oh, to have genes like that! He takes after his daddy. And his mama, too, for that matter. He's smiling on the regular now and he talks to us. He's rocking the baby-mullet hairdo and it looks quite fine on him. All-in-all, I would say that Levon is a pip, and a fine addition to our family. It amazes me how easily and quickly these babies slip into our lives and our hearts and our family as if there had never been a time when they weren't here.
And in the woo-woo sense of things, perhaps there never was a time when they weren't here. Just not in a corporeal sense.
I am not discounting anything, especially when it comes to babies.

After lunch we dropped off Hank, and Lily and Maggie and I drove to Owen and Gibson's bus stop where we waited for them to be dropped off.
"Are we going to your house?" Gibson screamed when he saw me. I don't know why the parents of my grandchildren don't just all move in here. Their children would certainly be happy about that. Can you imagine the amount of laundry we'd be doing? Lord. At least none of my leftovers would go to waste which would piss off the chickens.
Speaking of, Miss Nicey is not in the hen house tonight and I have no clue as to where she is. I hope she's okay, just hiding from the unholy trinity of Mick, Joe Cocker, and Pearl.
This situation is just about to get rectified. I refuse to see my hens suffer any longer and I feel quite certain that not one of them will mourn Pearl's passing and I will do my culinary best to ensure that he is honored in death with my chicken-stewing capabilities.
Bless his heart which I shall cook for the cats.