Grands. They Can Wear You Out 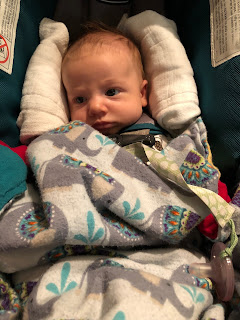 Levon, upon arriving at MerMer's house. Right after this picture was taken, he fell completely asleep. 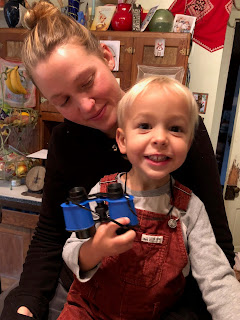 "Smile, August!" I said. And he did. When he gets here, the first thing he does is put those binoculars around his neck.

Boppy went and picked up Owen and Gibson and then they loaded up in my car and everybody else, which was Jessie and August and Levon and Mr. Moon, got in Jessie's car and we caravanned to the small town of Panacea on Dickerson Bay where the ghost of who I was when I was twenty-one years old still lives in the palmettos and pines on a lot where an old house used to stand but which has fallen into ruin and back to earth now. It was in the process when I lived there and only certain rooms could be safely trod through and there was no electricity and no running water but still, I could write a book about the time I lived there and whether that was a week or three months, I do not know. That time in my life was as hazy as the fog rising off the bay on cold winter nights although some things do stand out in sharp relief, memories I will never forget and when I get close to that spot, they flood my heart and time gets very iffy and far less exact than it generally is. 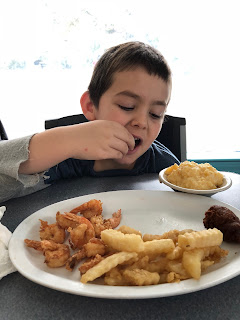 Gibson eating shrimp and cheese grits and french fries.
Gibson is like no other child in the world. He is as affectionate as a puppy. He is as loud as a Klaxon horn continuously being squeezed. He is as funny as any child I've ever met.
Typical conversation with him:
"Mer!"
"Yes, Gibson?"
"If I was a thief and I busted a hole in a door near the door knob and reached in and unlocked the door would that be smart or stupid?"
"Stupid, I think."
"YES! Because it would be easier just to bust the door down!" 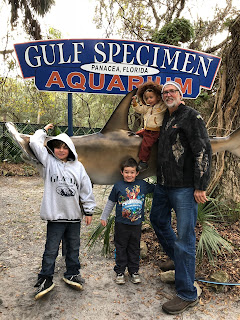 All of the boys except Levon. They are, I think, a very fine-looking group of fellows. 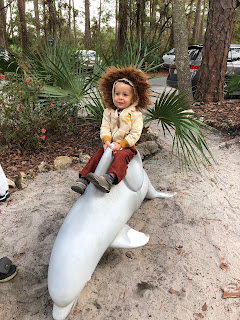 The little lion riding a dolphin. He had such a good time today. He was absolutely merry. 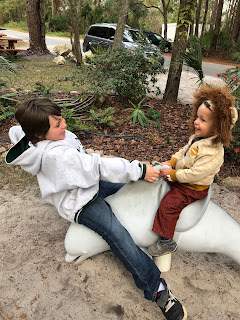 I am loving the way Owen interacts with August these days. He'll get down on his knee when he sees him and say, "Hey little dude! How's it going?"
And of course August is starting to worship Owen, the big boy. The cool boy. 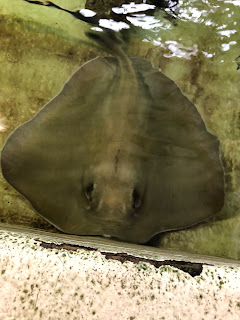 A sting ray named Stella. You may touch her if she comes up right beside you and offers her wing.
Gibson is in love with Stella. 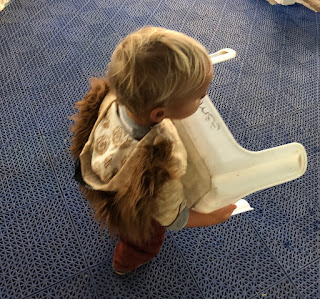 August carrying the little footstool around to see into each touch tank. I asked him if he wanted me to lift him up and he said, "No!" and set his stool down next to a tank and climbed on. 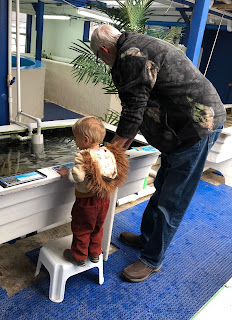 So it was a good day. It was a fun day. We saw all sorts of cool creatures and touched many of them and were amazed.
On the way home, we talked about a tank of eels we'd seen. There were SO many eels, poking their heads out of the shells and coral they were sheltering in.
I wondered what all the eels could be named. I suggested things like Creepy, Snakey, and Slippery. Owen suggested Cranky because they do all look rather pissed off.
And then Gibson shouted, "DONNY!"
I almost wet my pants.

As you may imagine, I am exhausted. Trying to keep up with where everyone was (mainly Gibson) in the scheme of rooms and areas made me a little crazy and I do not know why. It's not like I was worried about them disappearing or falling into the shark tank which holds only nurse sharks or being abducted by one of the grannies or moms or dads there with their flocks of children. But it did and that is the way it is.

If I have one piece of advice tonight, it's this- encourage your children to give you grandchildren before you are old and completely worn out. Because if you weren't feeling old and worn out before they get here, you will be in a short time.
But god, they are just so wonderful.
Yesterday when I went to pick up the boys, Maggie ran to me as she does and I scooped her up and she nuzzled me and patted me and crooned my name. Her father was standing about four feet away and she said, "Daddy!" He was talking to Lauren and didn't respond and she said it again as loud as she could, which is about the same volume as Gibson uses. DADDY!!!!! And then again. DADDY!!!!
He looked at her and patiently said, "What Maggie?"
And she held me more tightly by the neck and as sweet as Shirley Temple almost whispered, "It Mer."
"Yes, Maggie," he said. "It's Mer."
And she smiled in complete contentment and hugged me harder.