I Guess We Can Be Too Joyful 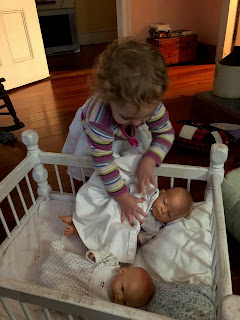 Maggie was a most happy girl this morning, only crying three times and all three times the tears came as a result of accidents of joy, all three of which could have killed her but thankfully, did not.
The first came when she was riding the horse with such abandon that she forgot to hold on and fell right off to the floor. I was sitting about three feet away but there was absolutely nothing I could do except to scramble to get her after the fall. All of her parts seemed to be working just fine and she soon stopped crying and began playing with rubber bands.

I have a rubber band ball and she loves it. Today she started removing the rubber bands, calling them by their colors, one by one. First she hung them all on a knob in the kitchen. 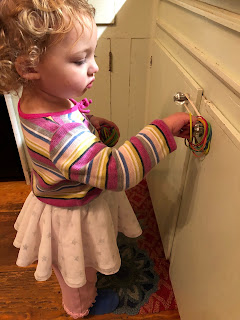 After she tired of this, she made bracelets of them. 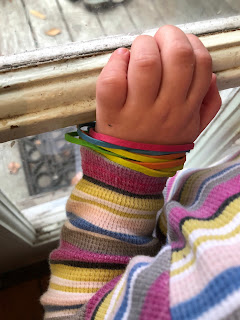 Then she got a container from a cabinet and incorporated that into her playing. 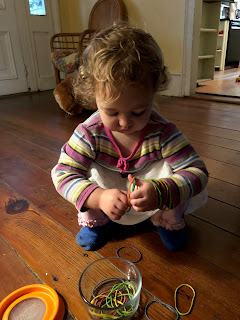 She seriously played with those rubber bands for at least forty-five minutes. Or should I say that she played seriously with those rubber bands for forty-five minutes?
I do love a child who takes on projects.
She is so funny. I love the way she says, "Okay!" It's more like "O-Kai!" She says it a lot.
"Maggie, do you want to help me make my bed?"
"O-Kai!"
"Maggie, do you want to read a book?"
"O-Kai!"

After we made the bed we played many games on it. A lot of peek-a-boo. Also, pretend-to-be-asleep. And, the eternal favorite, here-comes-the-little-spider-crawling-up-your-arm!
She was so taken with glee that she threw her head back and hit the window and if she'd gone through that glass...well.
But again, the angels were watching her and she was fine.

After playing and reading books on the bed, we moved back to the library where I set up a kid Tipi that we have and I put lots and lots of pillows in it and also her dollies and she crawled in and ONCE AGAIN, threw herself backwards with her head landing on the hard floor and again she cried.
Good Lord but that child has a hard head.
Literally and metaphorically.

And then her daddy came to get her and she yelled because she did not want to leave Mer's house one tiny bit. This seems to be a theme. But it's like I told Jessie about how to get August to behave perfectly: just do everything he wants and play with him every minute of every day.
Simple, right? I mean, Jeez Lousie. What else does she have to do?

Speaking of, I got a text from her. She'd gone out in this cold, wet weather and taken her boys to the library. 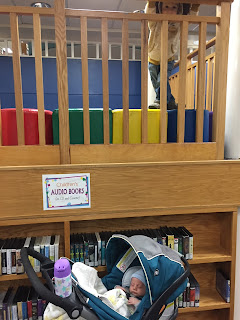 She said, "Both boys had fits but I didn't cry once!!"

I was sad to see Al Franken resign today. I mean, he had to. That's all there is to it. I do feel the irony of which he spoke in his resignation speech today. A self-proclaimed sexual harasser is in the Oval Office and a man who has preyed on young girls is running for the Senate with the full support of his party and yet he, Franken, is stepping down.

I have some things to say about this but I'm not sure quite what until I actually go to write it all down. Does that make sense? And here's the thing- this whole movement of women stepping forth to rightfully accuse the men who have sexually harassed or abused them is forcing us to think about our own preconceived notions about men and their actions which range from what may be absolutely unintended minor acts which made women uncomfortable (and I'm not including Franken in that category) to flat-out rape.
I don't think we have the language for all of this yet.
But we'll get there.
As crude as this is, I feel as if our society has just taken a huge dose of laxative and we are in the very early stages of this particular Master Cleanse. Is it even possible to get rid of the toxicity which has made women sick with suffering and fear since primate history began?

Meanwhile, I'm just doing the best I can to make my grandchildren's world as sweet and safe and rich as I can make it. I can't do that for them forever but I can do that for them when they are here.

Unless of course they insist on becoming so joyful that they lose their perception of gravity and hard surfaces in which case I am here to step in and kiss the boo-boo's away. I wish I could do that forever. Don't we all?