I May Be Taking A Nap Later

Mr. Moon just drove off with Magnolia June in her car seat to go home. The girl was very good, although sleep was a bit difficult. She woke up fairly early on in the night and I just waited and she fell back asleep but at five a.m. she woke up again and I went and got her and we slept tangled together with her clutching me like a cuddly tick for the next few hours. We finally got up at eight and she clapped her hands and said, "Yay!"
Maggie claps her hands and says "Yay!" quite frequently. I think she had a really good time, especially with her Boppy who seems very happy to have a little girl around again. And Maggie adores him. Every time her grandfather would make a little snore last night she would laugh out loud. We may not have gotten a lot of sleep but we had a merry time of it anyway.

I made waffles and bacon and she barely ate any but her mother says that's not unusual. She will make up for it during the day. 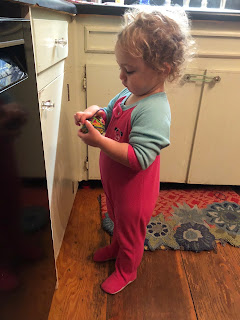 Working with a rubber band ball. She knows her colors as well as I know them. 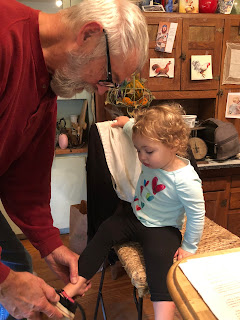 Getting her shoes put on by her Boppy so they can go feed the chickens. 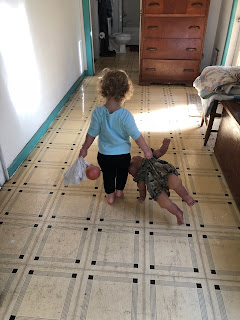 Playing with dolls. She loves dolls. I know that some boys love dolls and that some girls don't like them at all but I have to say that of all my grandchildren so far, she loves dolls the most. 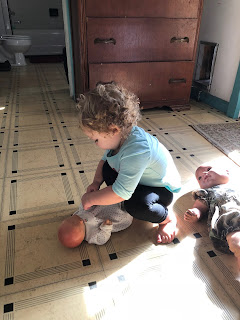 She "changes" them and gives them shi-shi which is what she calls nursies. She was not taught to do this. She was not encouraged to do "girl things" any more than the boys did. In fact, that big doll behind her was Owen's. She just loves her babies. 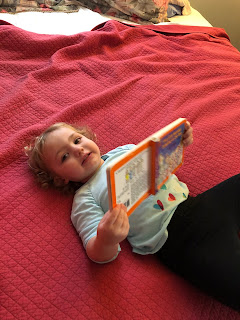 She's a beautiful child. She's smart and she's sweet and she's sassy as hell. She still speaks her own language although she is getting more and more words of English. She told her Boppy this morning, "That's mine!" when he sat on the chair she'd been using to put her babies to sleep on.
And she does this thing that just cracks me up. You know how kids sound when they're telling on someone? She totally does that, but without real words. She uses her own words and inserts the name of whoever it is she's telling on. It's unmistakable. The other day August was telling her not to do something. "No, Maggie!" he kept saying. Finally, she turned to us and did her tattle-tell thing and said, "August!"
She did it today but she was telling on her grandfather who had shut a door that she wanted to be open.
She is definitely growing up with big brothers.

So that's what we've been doing here in Lloyd since last night. I sure as hell wish that the members of the Senate had been home taking care of their grandchildren instead of passing a tax bill that no one has even read in its entirety although the parts that have been read display a mind-process so evil and so without regard for Americans who do not make millions of dollars a year that personally, I wouldn't trust most of them with children anyway. Not mine, not yours, not their own. They have blatantly proved that they have no concern for the health and well being of any of them except the ones who have massive trust funds.

Love to all of the rest of us...Ms. Moon