In Which I Bless Us All, Etc.

Well. Damn. Dovey went on today. When I got up this morning she was standing by the door that has glass in it, seeming to want to get out so I took her and put her in a sunny spot under the bird feeder where the chickens have been spending most of their time these days. She stood there, so motionless and huddled that Maurice went over, sniffed her and just walked away. And a few hours later I found her in the little duck pond a few feet away, still and gone.
Shit, shit, shit.
That's what I texted to Mr. Moon when I found her. I lifted her out of the water and buried her in the little yard of my office right next to Pearl's grave. I honestly think that something had happened to her eyesight and if so, that could explain whey she stumbled into the little pond.
Anyway, that sweet little hen will no longer be sad or sick and for that I am grateful but I am sorry to have to tell Owen who did love that bird. Mostly because she let him hold her and because she was so soft, but still. One more death he will have to incorporate. He suggested yesterday that he should maybe take her home but I pointed out that they had no place to keep her. He said that his daddy could build a fence and a coop and then both she and Nicey could come and live with them. He thought about this a moment and then he said, "Or...maybe we could just live here!"
I think this is his dream. Then all of the chickens would be his to share and better yet, he would have his Mer Mer and Boppy to accommodate his every wish.
Bless his heart.
Bless Dovey's heart.
Hell, bless us all.

Owen also asked me yesterday how babies get into their mama's tummy. I immediately thought, holy shit, this is far above my pay grade!
We had been talking about the cradle in my room that Mr. Moon made for Lily before she was born. It's a large cradle, big enough to hold two decidedly non-babies who are willing to share space. 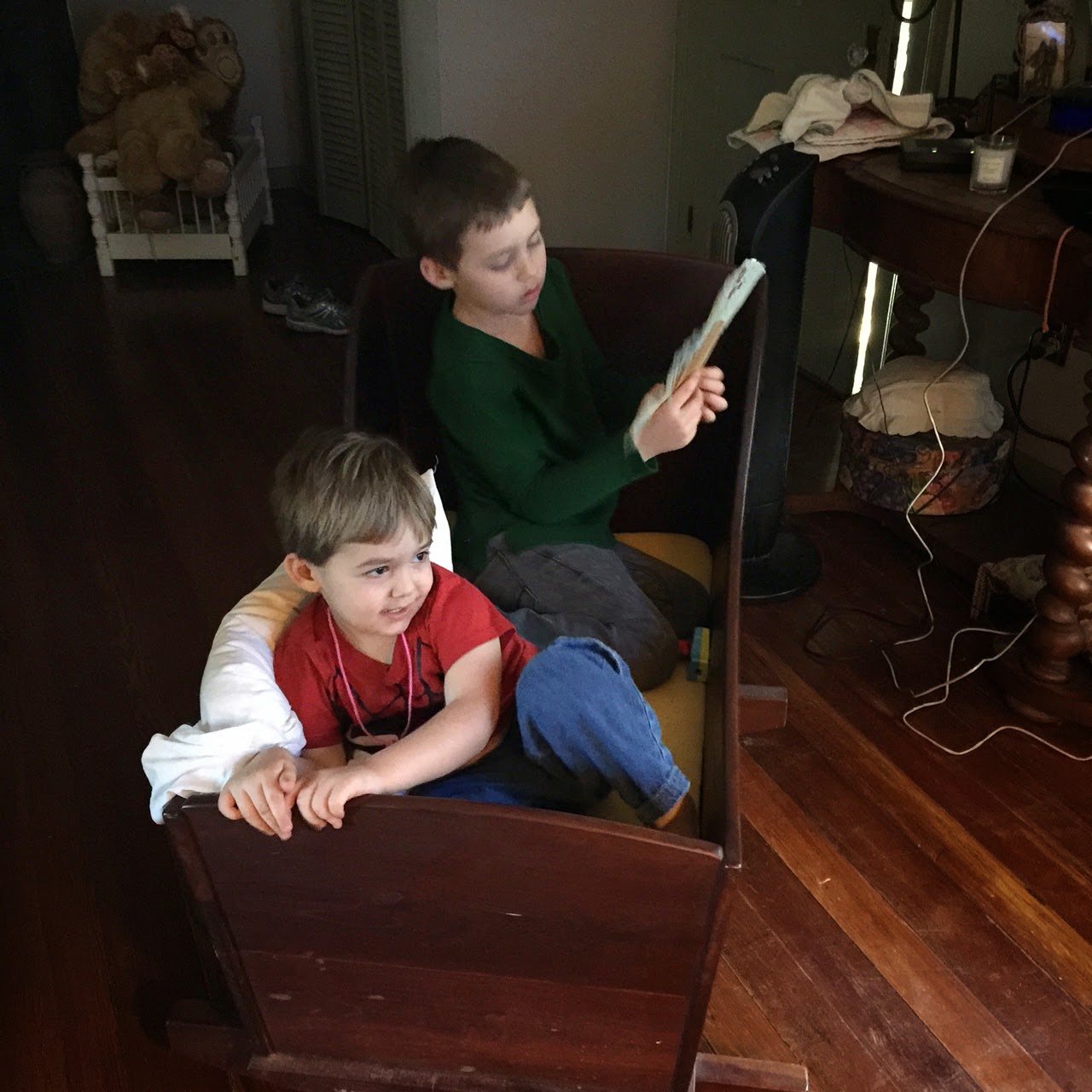 Owen moved it yesterday so that he and Gibson could watch TV from it and he wanted to know if, when he had a baby sister, they could borrow it. I told him that they surely could, if and when he had a baby sister but that Jessie and Vergil were going to get it first.
This led to a discussion about how a baby has to grow in its mama's tummy for nine whole months and that, in turn led to his question.
"How DOES a baby get in there?"
I told him that first off, two people had to love each other very, very, very much. Which of course is one of the biggest whoppers anyone will ever tell him and I was sorry to do it but I was scrambling. He then told me that his mama better love his daddy a whole lot because he really does want a sister. I went on to explain that babies need lots of time and attention and money so that it is very important to make sure that families have enough of all of those for every baby.
He seemed to accept this and we went on from there to some other activity. Swamp adventures, as I recall, which is a whole other story.
I gave Lily a rundown of the conversation later as a head's-up via text. She responded by saying, "So now when I don't have a baby it will be because I don't love Jason enough."
As Andy Griffith used to say, "What a wicked web we weave when first we practice to deceive."
Although I wasn't trying to deceive so much as I was trying to baffle with bullshit.

Well, babies SHOULD be about love and that's the truth and so if I misrepresented one truth for another, sue me.

And there you go. Stuff that happens. Death and how-do-babies-get-in-there?
One is as mysterious and complex as another. And as simple. And as powerful.

I talked to an old friend on the phone tonight who is getting chemo and although it was hard to make the call, I knew I had to. I've been dreaming about her lately and we ended up having a very good chat with lots of laughs. She is brave and getting on with it and I love her so much and I think she is going to do very, very well and that we shall have many more good chats. I'm counting on that.

I'm going to go heat up the chicken I baked last night which was absolutely the very best baked chicken I ever made, possibly ever tasted, and a spinach and rice casserole. If Red Sky At Night, Sailors' Delight is true, tomorrow is going to be one very fine day.

At least here in Lloyd. I hope it is where you are too.