And The Moon Is A Big Ol' Fat-Bellied Beauty Tonight 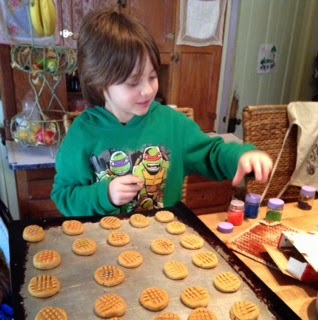 We made cookies today, peanut butter with sprinkles. Owen did an excellent job of applying the sprinkles very carefully, naming each cookie as he did so. He also licked the beater so clean that I really didn't need to wash it although I did. Gibson was mostly having a meltdown while this happened. It came out of the blue and one minute he was happy and the next he was crying unconsolably for no apparent reason and every question I asked him (Do you want some cookie dough? Would you like to lay on my bed and play with my phone? Do you want some ginger-ale? Would you like me to read you the train book, the fish book, the Little Red Hen Makes a Pizza book?) was answered with NO and yet, if I said, "Well, I'm going to go back in the kitchen now because obviously I am not helping you," he'd scream, "Don't leave me!" and hang on to my leg and then he finally settled down on the bed with the phone to watch the most hideous of videos- the Egg Surprise videos- and if you haven't watched these, give great thanks to your personal Deity Of Choice because they are the weirdest, most bizarre things on Youtube. Okay, probably not but I don't have any personal knowledge of those things. I can only imagine and really would rather not.

We also played ball, with them on the steps and me down at the bottom. We use a big blue ball and I throw it to them and they catch it and throw it back or let it bounce off their faces or heads or knees (it is very soft) and yell, "Not my face!" "Not my head!" "Not my knee!" and so forth and they laughed so hard that I laughed until I snorted. They were laughing so hard they had to hold onto each other to remain sitting up.

So that was all good except for the meltdown and hey- what's a little meltdown between friends?

The worst thing that happened today was that my Sony Discman died. Okay, stop laughing! I mean it! I listen to books on it from the library half the day. I listen while I do everything that doesn't require me to talk or write. And I'm in the middle of a very good book. Dammit! They cost so much to replace that I don't even want to discuss it. Yes, yes. I know. I could just get Audible on my phone. I think I will go to town tomorrow to see if I can find a cheaper brand replacement. In the meantime I am listening to podcasts and that's fine but I want to listen to my books!
Fucking depressing.

The temperature is dropping and I am so damn grateful to have a warm home, a cozy bed. My husband is out of town but Maurice and I will keep the home fires burning. I'm struggling a bit with the anxiety, the depression, but I will survive.
Owen said the sweetest thing to me today. He had a sprinkle caught under his fingernail and he could not get it out. I gave him a toothpick and said, "Try this."
He did and got it out immediately.
"Sometimes all you need is the right tool," I said.
"Sometimes all you need is the right Mer Mer," he said.
"Oh Owen! That's so sweet! Sometimes I wish I had a Mer Mer."
And he said, "I'll be your Mer Mer."
Oh my god. My heart just burst wide open.
He also later told me that I just "freaking love" him and his brother.

Yeah. I'll survive. One way or another. 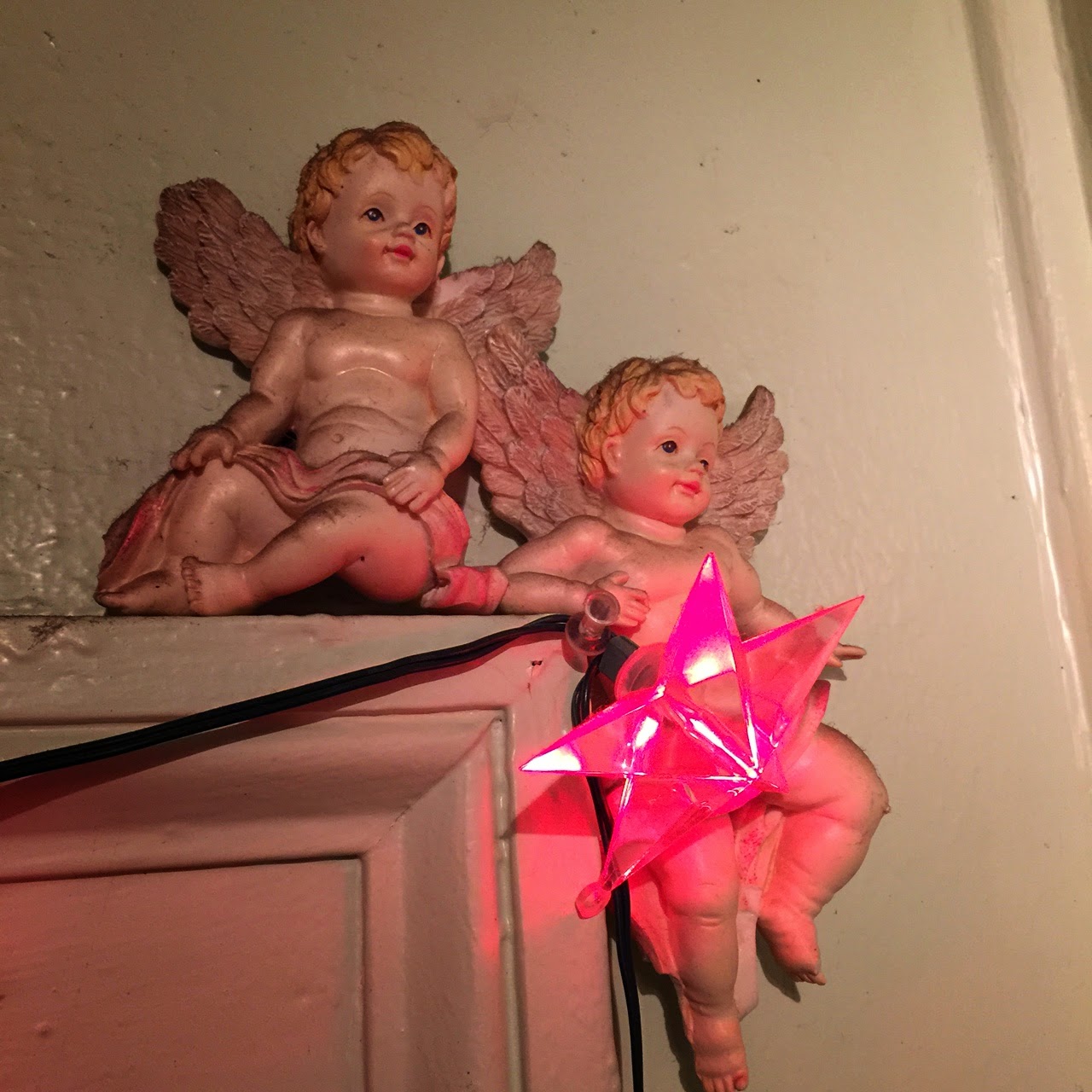 Just because I like it. That's on the corner of my kitchen door. Those star lights have been plugged in and working for about four years.

One more thing- is your Feedly all fucked up? Mine is. What's going on with those folks?
First world problems- Discmans and Feedly Fuck-ups.