It's been a day, but a good one. Strange in some ways with unexpected turns of events. Now in my life, an unexpected turn of event could be finding an Ensure bottle amongst the beer cans by the side of the road when I pick up trash, which I did today, making me wonder if some nutritionally deficient elder delinquent is riding around and tossing his Ensure bottles out the window as he finishes them. If so, it's sort of funny but not really. It's only a half mile piece of road and I filled up two tall kitchen garbage bags and left some trash behind. There are things even I won't touch and I'll touch almost anything, including dead roaches to take to my chickens.

Note: Chickens prefer cockroaches to cashews. Yet another reason to love them.

I also found this: 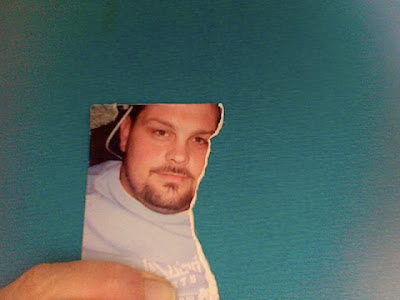 I think we could entitle this one, She Don't Love Bubba Anymore.

Or maybe, "Percival, You Have Broken My Heart In Two."

Hard to say but it's safe to say that someone has torn this gentleman right out of the picture.

She got in the car and I apologized for being dirty (I was, having been on garbage patrol and then doing some yardwork) but she said that was fine and we chatted a little as I drove and she told me that the man at the garbage place had told her it was too dangerous for her to walk down that road as a lot of black people lived there.

Being my usual calm and diplomatic self I said, "That old prejudiced son-of-a-bitch!" Okay. The term "mother-fucker" may have also been in there somewhere.

Turns out the girl herself was from Turkey and had been adopted by a black father and a white mother and she was mad at her father with whom she lives and was walking to her grandparent's house near Chaires Crossroad and I don't know if they are black or white but their name is White and I know this because it said so on their house. "The Whites."

Could I make this stuff up?

I told her I'd walked down that road many times and the only time I'd ever felt in danger was when I went down a dirt road where obviously insane white people live with their insane dogs and yes, I felt I could have been in danger when a rottweiler lunged at me and the man who owned it just stood there and looked at me with his beady eyes and did nothing while I was peeing in my pants and telling the dog to GO HOME!

I got myself so worked up over the old guy at the dump I almost went and told him off but I didn't and I don't know if I should be proud of myself or ashamed.

Sometimes you just don't know what the right thing to do is. Can I get an amen on that?

Which leads us to the fact that in my over two years of blogging I think I've gotten one negative comment before the great Twitter Incident this past week and I've gotten a few since then. The last one is a woman who desperately wants to know when I think Lily's baby became a human and not just an "inconvenient blob of tissue."

Well, you know, I can't answer that question and I keep telling her that in the comments but she won't buy it. Obviously, she wants me to admit that Lily's baby has always been a human, from the moment the sperm hit the egg until now. Well, I just don't know. Like I told her, I don't think an acorn is a tree and I don't think a fertilized egg is a chicken, although there is certainly the potential there. I also told her that my opinion about abortion is that if you don't believe in them, you should not have one.

Otherwise, let each and every woman decide for herself.

But the question is a good one. When does an embryo or a fetus become a human being? And is it a sin to stop one from becoming a human being?

What I really think is that the potential for being a human isn't a human being. And I also think that either I don't really believe life is sacred or else I believe it's so sacred that to allow a human embryo to become a real-live baby human is such a huge and sacred thing that it should be considered carefully. Bringing a child into a world where there will not be enough to eat for it to develop properly or where there is no health care or where the mother knows she is not fit to raise a child because of emotional, psychological or other reasons doesn't seem like honoring life to me. Mother Nature always errs on the side of too much. You should see the number of acorns that drop out of the trees some years. If every one of those grew up to be an oak tree, I wouldn't have ground to walk on and let's face it- the ground couldn't support such a growth of trees.

Now I'm not equating oak trees with babies, exactly, although maybe I am. The acorns which manage to sprout and thrive and grow into trees are tough and persistent and the trees they grow into are sacred in my opinion.

What I'm saying here is that I believe that every baby born deserves the best life possible. That doesn't mean his or her parents need a fine house to live in and an entire wardrobe from Baby Gap, either. When my oldest ones were born we had squat and yet, they had plenty of everything they really needed, most of which was love.
And ideally, every child born would have enough of that to make anything else adequate.

But that's not the case. And if a woman knows that she is not able to raise a baby in the way a baby deserves to be raised, I believe she has the right to acknowledge that and terminate the pregnancy if she wants to.
That's that.

There are too many children on this earth who are not being raised in love or with enough food or attention to let them grow up to be normal human beings with normal problems. They grow up knowing nothing but anger and neglect and hunger and sexual and emotional and physical abuse and by the time they're adults they're probably either in jail, addicted, or raising another child the same way they were raised. Is this what we would call humanity?

Listen- I've heard plenty of survivors of sexual abuse say they wish they'd never been born and these were often professional white women. They wished they'd never been born because what they'd endured as children had so profoundly affected them that they knew they would never be happy or okay or even content. And that's just survivors of sexual abuse that I have happened to know.

What is humanity? What makes us human? Our DNA? Yeah. Sure.
But what else? Compassion and the ability to love. I think so. The right to be loved.

I think in a perfect world all children who have the tenacity and strength to make it through conception and development and birth would be born to a mother who recognized the Christ child in her baby, the Buddha she had birthed.

We don't live in a perfect world. There are women who give birth not through love but through a haze of despair, through the smoke of the crack pipe, through the inability to even know the huge responsibility that bearing a child entails.

That's what I think. That each and every child deserves a parent who wants it and who will welcome it and who will take care of it. And don't talk to me about adoption. I've yet to meet the mother who gave a baby away who is at peace with that decision to the point where she doesn't dream of that baby all the time, who doesn't mark birthdays with tears, who doesn't wonder in her heart what it would have been like if she could have kept her baby.

Look- this topic is too big for me. And who gives a shit what Ms. Moon thinks about it? Really. My opinion doesn't mean a damn thing. I have known women who were adamantly pro-choice who, finding themselves inconveniently pregnant, could not bring themselves to get an abortion and I have known women who were as adamantly pro-life who have had abortions.

This is the most private, most serious decision a woman can make and it is not up to me, or to you or to a law-maker to make it for her.

I am fifty-five years old. I have done a few things. I have lived through some things. And I know what I believe. This is not to say I am closed-minded. I cherish other opinions. I have readers who have vastly different opinions than I do on religion and politics but they read me and I read them because I know they are thoughtful people who base their opinions on their own realities and who are not afraid to speak the truths they have come to learn.

But bless all our hearts because we are all at least thinking. And that is part of what a human does. A part of what makes a human being.

At least to my mind. Which is the one guiding the fingers which write these words on a quiet night in Lloyd, Florida.
Posted by Ms. Moon at 4:40 PM