Limits Have Been Reached 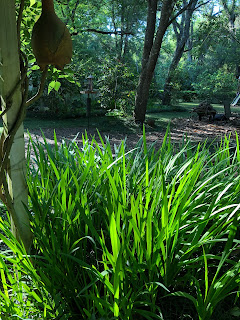 Well, I finally did it. I've had a long day and have barely sat down. I walked over six miles and it felt great and I felt as if I could have just kept going on that beautiful shady road forever but knew I had to go to town and get some things done and so I stopped and came home and did some chores around here and then I did go to town and I did get things done and then I came home and got more stuff done and by five-thirty I'd hit a wall and godDAMN! if the guys next door didn't start in with the thrashing pounding beating guitar soloing turning-the-amps-up-to-eleven crap and I tried to text him but my phone won't text people out of the network from my house and so I just walked out my front door, walked over to his, and knocked. They were between songs and it still took me knocking three different times and also calling out my neighbor's name before he answered the door.
"I just can't..." I said. "I just take it anymore. I'm sorry. I've tried. But I can't."
And he looked rather pissed.
"Well, thanks for not calling the cops," he said.
Which indicates to me that he's considered the possibility of someone doing that.
"Oh, Ryan, no!" I said. "I would never call the cops unless I thought your house was in danger."
I meant it at that moment but thinking about it, there are a lot of other reasons I'd call the cops but it would just be rude as hell for that to be the first inkling he had that I might not be too happy about the noise.
He said they'd turn it down or install some sound-proofing or something and I said thanks, and apologized again and said that I hated to damp down anyone's musical spirit but really, just...no. And reminded him that we do indeed share this space.
Again he said, okay, we'll do something, thanks and then shut the door and yeah, he's mad and I know he considers me now to be the old fucking bitch who lives next door but he probably already thought of me that way ever since I chastised him for cutting down one of the most beautiful camellias I've ever seen.

Haven't heard a peep since I left so good for the old fucking bitch.

I wonder if Jefferson County even has any sound ordinances. I wouldn't be surprised if we didn't.

And so that is how it's gone today and I'm not sorry at all that I went over there. I am sorry that it took me so damn long.

Jessie and Vergil are on their way home and tomorrow is Jessie's birthday. We may be celebrating with pizza and Hank's trivia although I am not sure. I do know that I am making a birthday cake. Twenty nine years ago right now I already knew that I was in labor, although it was slow and easy at that point. The magnolias were in bloom as they are now, and I was as full of apprehension and excitement and questions about how things would go and who I was about to meet as I was of baby.
Sure turned out good, didn't it?
I had no idea that in twenty-nine years not only would that baby be all grown up but that she would have given me two wonderful grandchildren.

We never have any idea. We just don't.

Okay. Stand up for your rights. When you reach the point where you'd rather be considered an old fucking bitch than to hear one more moment of sound blasting which may be technically music but which is hell in your ears, do something about it.
Be the bitch.
As nicely as possible.