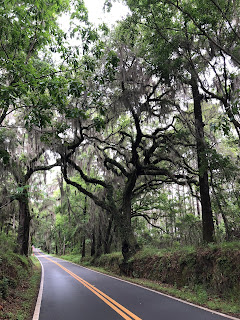 I walked the miles today but I walked them relatively slowly which is fine. I still can't get over how beautiful this road is, how sparse the traffic is, how relatively few houses there are on it.

Here's a guy that was walking, or rather, doing whatever it is that snails do to travel, even more slowly than I was. 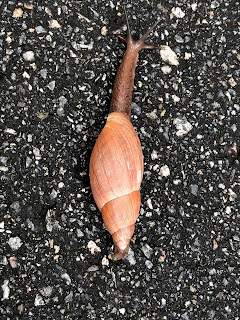 I would have moved him to the shoulder of the road but he only had a few inches to go and I decided to let him finish his journey on his own.
Or her own.
I just looked it up and that is a Florida Rosy Wolf Snail which, according to this article, was responsible for "the single-most catastrophic extinction event in modern times."
Which happened in Hawaii.
Doesn't look that dangerous, does it?
Well, there you go. Don't go introducing non-native species into other habitats. It just never seems to go well.
But in Florida, they are fine. 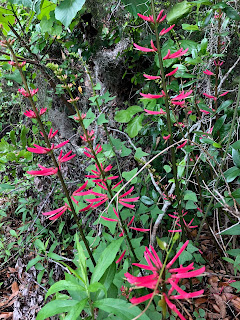 So are these. They are specimens of the Coral Bean which are native here and feed the hummingbirds. 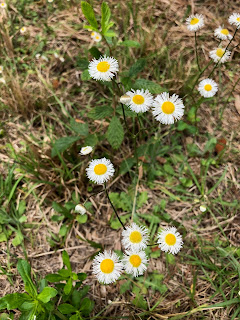 And that is an Oakleaf Fleabane. It's fringy petals can be white or a sort of pinkish lavender. They too are native.

And these are a few of the plants I saw on my walk today.

After I got home and had my lunch and did a few things around here, I went to Tallahassee to try and find some new walking shoes. I went to Dick's first because (a) their decision to quit selling semi-automatic weapons was brave and I want to support them, and (b) their online presence claimed they carried a good line of women's Saucony running shoes.
(b) was a lie.
Then I went to another place. They had some Saucony's but (a) the woman working there seemed so absolutely disengaged from any sort of customer service as to render her presence an annoyance, and (b) they had only one style and I didn't like it, and (c) they did not have my size.
Then I went to yet another place. And you know how much I love to shop.
Hahahahahahaha!
This place had several styles and some in my size and I ended up buying a pair that I will probably regret because I was sucked into getting them due to the comfort factor of the memory foam insoles. They are very lightweight and will probably take even less time to break down but whatever.
And no one annoyed me at that store. Actually, no one helped me at all which was far more preferable than a sales associate who appeared to look upon me as pond scum because I did not want Nikes or New Balance shoes and then ignored me completely.
At least the guy who worked at Dick's asked what I was currently running in.
Again I say- Hahahahahahahahahahahaha!
Run? Not unless there's a bear.

And then I went to a feed store for more chick feed and I have to tell you- the employees at feed stores are just the nicest people. The guy who helped me had a great handlebar mustache and answered my questions about a few chick-related things quite honestly and did not try to oversell and before I'd even paid for the bag of food, he'd put it in the back of my car.
Where it still is but that's another subject involving me and upper body strength which I used to have.

To top it all off, I read an article in the New Yorker that I really enjoyed. It's entitled "Bean Freak" and it was written by Burkhard Bilger and it's about a guy named Steve Sando. Who is the bean freak. It involved not only beans and the growing and eating of them but also Mexico where Mr. Sando spends a great deal of time looking for beans that have been undiscovered by the gringo world.
So you know I loved that.
Plus, I already had a pot of pintos cooking on the stove and that is what we will be having for our supper.

Chicken keeper tip of the day: If you at least partially freeze grapes before cutting them up into tiny pieces for your young chicks, it will go much easier and your knife will not have to be as sharp as a razor blade to get the job done without smushing them.

There you go. Customer service at its best.