He Could Not Have Been A Better Boy 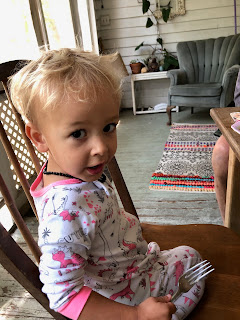 August's overnight went absolutely perfectly! He was such a good, big boy and I think he had a wonderful time. He did not want to go home this morning.
He ate a good bit of supper last night- fried grouper and steamed potatoes and corn on the cob and green beans and carrots. Of course, ketchup and ranch dressing were involved. That child will eat anything accompanied by what he calls dip.
His Boppy watched him in the shower after supper and it was a very, very long shower. Boppy finally had to pry him out of there. And then I put him in his jammies and we laid down on my bed to read some books and then I told him it was time for him to go to sleep in his bed.
He really wasn't too interested in that. He didn't cry or fuss and we did put Big Bear and a dolly in there but no, thanks, not yet.
And then the sweetest part of the whole visit happened for me. I said, "Do you want to listen to some music?"
"Yes," he said.
So we found my music app on my phone and I played him a few things but he wasn't too interested in any of them until I put on Joni Mitchell's Blue.
That he liked and we listened to those songs I know so well, by heart and by bone, Joni's voice and the piano, the dulcimer. I held that little boy in my arms and thought about how I used to listen to that album over and over and over again in that alien dorm room in that alien state of Colorado, all that was familiar and loved by me left behind because of my need to escape from that which was familiar and horrendous. How I never in a million years would have thought that one day I would be listening to those same songs again, holding my beautiful little grandson in my arms and smelling his clean, damp hair, feeling his warmth as he relaxed into sleep.
Jack came and got up on the bed with us and August petted him as he listened to the music and within a few songs, he had fallen asleep and I laid there with him a little while, still listening, wondering at how it's all turned out.
And then I carefully put him into the little bed set up by our bed and covered him with two light blankets and he stretched and turned and held on to the doll and I swear to you- that little boy didn't make a peep all night long.
He didn't wake up until 8:30 this morning and when he did, he stood up and looked around as if trying to remember how he'd gotten there and I picked him up and put him beside me in the bed and we looked out of the window and he said, "The sky is up!"
"Yes it is," I said. "Should we go find Boppa?"
"We call him Boppy," he said.
"Okay. Let's go find your Boppy."
And we did and they played fishing games and read Outdoor Life together while I woke up and drank some coffee. 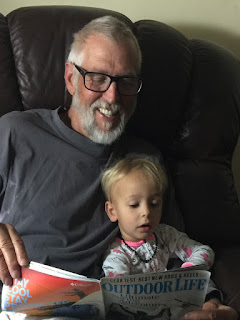 I asked him what he wanted for breakfast and he joyfully announced that he would like pancakes and so there were pancakes which he shoveled in like a machine. August can eat some breakfast.
Here he is with his Boppy, about to go let the chickens out and play in the camper van while Mer makes breakfast. 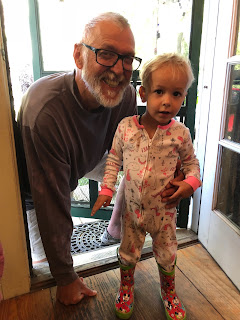 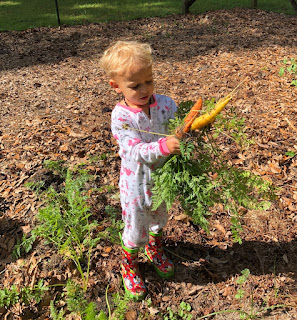 When his mama got here I'd gotten the little coop in the big coop outside all set up for the four jungle fowl birds and we ceremoniously carried them out in a box and set them in their new home. 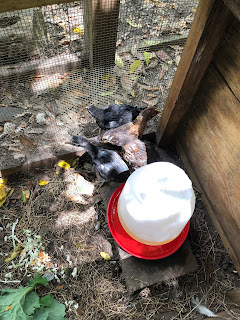 I think they will be happy there until they get bigger and meanwhile, things are a bit more peaceful in the chick pen in my bathroom. This whole transition is going to be a process. All of the chicks are different ages and in different stages of having the feathers which make it possible for them to leave the inside nursery and go outside.

And tonight it is only going to be me and Mr. Moon here. I called the other grandmother and she is insistent that she wants to do the entire weekend with Owen and Gibson and Maggie and I salute her and think she is very brave and probably far more adventuresome than I am. She says that all is going well and I am glad of that. She also said that she has next week off work which will give her time to recover.

Mr. Moon has been boat cleaning all day since August left except for one of his famous power naps. I will admit that I took a nap too but it was probably a great deal more leisurely than his was.

I hope my little chickens sleep well outside tonight in their protected coop with the clean hay to cozy up in. I hope that August sleeps as well for his mama and daddy as he did for his Mer and Boppy last night. I hope that Lily and Jason sleep sweetly in their cabin as the great boat they are on steams towards home. And I hope you sleep well too.