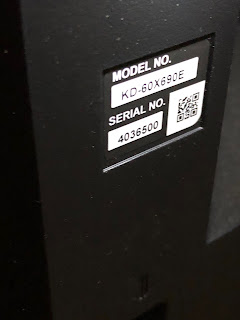 Our smart TV has recently quit being very smart and refuses to recognize the internet and by the time we think about this every evening, we are too damn tired to try and get our old brains in gear enough to do anything about it except what you always do which is to unplug every Gee Dee thing involved in the situation and plug it all back in and hope for the best.
So today, since Mr. Moon was off fishing in the Gulf of Mexico and I was putzing around doing a little of this and a little of that I decided to tackle the problem. First thing I did was to once again unplug everything and wait awhile and while I was waiting, to google a solution for the problem and I came up with this which illustrates about how it went.


I knew enough to take a damn picture of the model and serial number so that when I called the tech number after the rebooting did nothing again, I would have it at hand.
And that was about the only thing I did that went smoothly.
I got a guy named Sam (right, sure) and he spoke perfect English and although he did have an accent he was absolutely understandable, even to my old ears. So that was all good. But I swear, it was like talking to a machine. I generally try to somehow insinuate a bit of humanity into these conversations because you know damn well you're going to be on the phone with this person for at least forty-five minutes of your own personal life but I did not even try with Sam. I just followed his instructions, often feeling as if I was 98 years old and not in control of any of my faculties or cognitive abilities.
Still, we managed to go through about fifteen different steps to try and remedy the problem and none of them worked and finally Sam told me that within three business days, the technician department would be calling me to set up an appointment for a service technician to come to my house and replace parts or do whatever needed to be done.
Sigh. Okay. Whatever. My ear was really sweaty and I just wanted the whole thing to end.
But then, BUT THEN, Sam said, and I swear this is true, "So, please keep your lines open so that our technicians can call you."
My lines open?
Oh, Sam.
"I'll do my best," I told him, thinking of the fact that I can leave for three days and come back to discover that not one person has called my land line.

Anyway, that's what I did for part of the day and I also did a little garden weeding. Here is Maurice, looking to see what is in my weed pan. 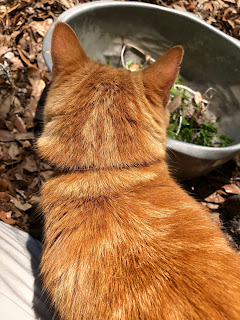 There was nothing of any interest to her and so eventually, she sauntered off to hunt dragonflies or something.

Two of the chicks got out of the coop again today but when I held the door opened for them they went back in. Let's face it- no matter what I do, those chicks are going to figure out how to get out. They can fly because they are birds. People don't really think about chickens flying but trust me- when the occasion or need arises, a chicken can fly. Not like long distances or anything although I would pay to see that. But they can fly up to roost in a tree or over a fence.

I have a lot I want to say about the Bill Cosby conviction but I'm not sure tonight's the night. I will tell you one thing- I am having a harder time hoping that he goes to jail until he rots than I probably should be and I think it's because as a child, when I was being abused, I absolutely had to separate the stepfather I knew who was a very intelligent man who was a college (okay, Jr. College) professor and fairly well thought of man in the community and whom my mother loved, with the stepfather who was abusing me.
He was both of those men.
And quite honestly, I loved the one, even as the other tormented me and filled me with fear every night of many years. How to reconcile this?
Separate them. Which required a great deal of non-logical thinking.
And so perhaps that is why I'm having such a hard time with this Cosby thing. Logically, I want him to go to jail and have to suffer the indignities and hardships that anyone who had done such horrible and criminal things to women and then denied, denied, denied would have to suffer.
But...
He's Fat Albert. He's the Jello pudding guy, mugging for the camera. He's the Dad is Great! He feeds us chocolate cake! guy. He's Dr. Huxtable in the cozy funny sweater who loves his kids and wife to distraction!
Yeah. He is both. And the logical, non-damaged part of me says, "Lock the sonofabitch up until he dies."
Hell, his actions have affected me. When all of the accusations against him were coming out I got thrown into a depression/anxiety spiral that I had to fight my way out of.
And yet, there is still that fucked-up part of me who will forever be a little girl, wishing desperately for a daddy's love and if Bill Cosby wasn't a daddy figure to many of us, I don't know who was.

That's enough of that.
Here's my favorite thing I read today. It was posted on FaceBook by Hank who is down in Apalachicola, staying at the Gibson with Rachel. He said, "This morning I described myself as the vaguely disreputable eldest son of a large southern family."

I commented this back:
"I believe perhaps you should have said that you are the beloved eldest son of a large, vaguely disreputable southern family."

And in that vein I will tell you that the Confederate jasmine's scent is so strong that it's almost making me nauseous and the fish are jumpin' and the cotton is high.
Well, at least the part about the jasmine is true. I don't know about the fish, and the cotton ain't high yet but it will be.