The Usual, Plus Cashew Divination 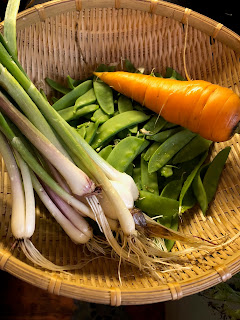 Well, happy 4/20, y'all. I had the most interesting conversation yesterday with the lady-of-a-certain-age (which means even older than I am) who is one of the co-owners of the compounding pharmacy where I get my hormones. Her family used to own the only pharmacy/drug store in Monticello until Walgreens moved in and they just could not compete, despite customer loyalty and the fact that they'd been filling everyone in the county's prescriptions since forever and I can remember when Hank was a baby, visiting their ice cream parlor which they also ran.
Anyway, along with my bio-identical hormones, I purchased my hemp CBD which I had to ask for and is kept beneath the counter and she told me that she was not quite sure about the legality of it but that she thought they'd be putting it back on the shelf anyway. I told her that I thought that since it was made from hemp and not cannabis, it was probably legal but who knows? Things in Florida are still a bit hazy as to the laws about these things.
"Well, it's a good product!" she said. I don't know what she takes it for but another woman who works there (also an older woman) takes it for her lupus and swears by it.
"It is!" I said. "And so is the medicine they make from the cannabis!"
"I know!" she said.
And then we got into a real quick discussion about how it's just a crime that so many people are in jail because they used marijuana and now we know what an effective medication it can be for so many things.
"And I'm a good little Baptist girl!" she said. "So you know how I used to feel about it!"
And then she said, "Big pharma isn't going to let them keep selling it like they do now though. You know they won't!"
Bless her heart and I mean that in the best way possible. I know she was (and probably still is) a good Baptist girl. She always dresses nice and wears lipstick and make-up, all tastefully applied. She must be in her late seventies and she gets herself ready for work every day and goes in and probably puts in a full day in the business that her family has carved out a niche for in Tallahassee since Walgreens took all their customers.
So that's my little story about weed and change and small businesses for the day.

I had to go to town again today for a few things and I wanted to get myself a new pair of walking shoes. 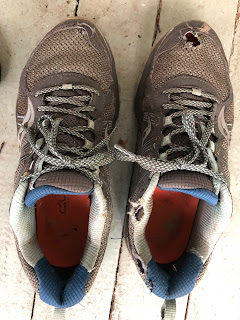 Not that mine are worn out or anything.

The place I usually buy my shoes has mysteriously disappeared and I think Lily told me that it was no longer there but I'd forgotten. I have been wearing Saucony shoes for almost forty years and they fit my narrow heel like no other brand of shoes do and not every place that sells athletic shoes carries them. So, instead of trying to figure out where else I could get some, I went into Marshall's which is in the same strip mall as where the shoe place used to be and I bought myself a new 5 liter cooking pot. I've been wanting one but all the ones I've found have been either too expensive or too cheap or mostly, nonstick and I don't do nonstick except for cooking fried eggs and omelets. But the one I got seems fairly heavy-duty and it's stainless steel and I believe it will do. Also, I like the fact that it does not carry the name of any celebrity chefs.
And I'm going to try to learn to only cook five liters of soup rather than eight and I'll let you know how that goes.

Tonight I will be making a stir fry with the vegetables you see in the top picture which I just picked. Suddenly the sugar snap peas are coming in like gangbusters. Of the carrot, Mr. Moon said, "You finally got a real carrot!"
Haha, Mr. Moon.
It is a rather lovely specimen of carrot, isn't it?

The church is swinging next door and thank you, dear sweet Jesus that the guys on the other side of me are not having band practice. I put two more chicks outside in the little pen today. That makes six out there and eleven still in the bathroom. Jessie is working on a list of names for her chicks and she asked August for help in naming them today and he suggested Lucy for the Rhode Island Red and Bunful for the Barred Rock. When his mother asked him where he got that name, he said that the cashews told him. Forget the I Ching. Go ask the cashews for guidance. Probably only works for two-year olds. Remember when Owen named one of my chickens Eggy Tina? That was awesome. I may use that one again with this batch along with the traditional Dearie and Nicey. Anyone who keeps hens should have a Dearie and a Nicey, don't you think?

So that's it for news from Moon Manor today.
I guess I better go make a martini, chop some vegetables and heat up the wok.