It Was A Beautiful Day 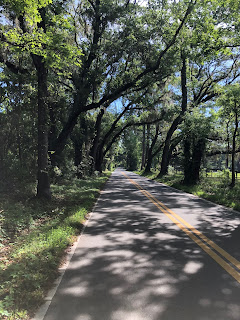 I have been enjoying walking down this road so much that I decided that I would start driving to it, parking, and then going from there. Walking down the highway to get there is absolutely not fun and there's so much traffic, no shade and all it's going to take is one driver of a log truck glancing down at his phone or reaching for his coffee and I'm going to be road shoulder paste.
Ooh! I'm gross.
But you know what I mean.
So I implemented my plan today and drove to a sort of turn-around spot and parked my car and stuck a note under the windshield that said, "Car Not Abandoned. Owner Taking A Walk," and then I took a walk.
Not a very, very long one but I'm still sussing out the territory there and again, I needed to get to town to meet up with Jessie for our drive to Crawfordville to get more baby chicks.
Which didn't happen because Jessie had the forethought to call the ACE hardware down there to make sure the new shipment came in and no, it had not. We were all loaded up in the car so we went to lunch instead where we saw May and got to visit with her and we ate pizza and salad and August got to watch the TV on the wall which he couldn't take his eyes off of. You couldn't hear any of it due to the music playing in the restaurant and it was only an old rerun of Friends but he was fascinated. I told him that Phoebe and Joey were the only ones worth watching but he didn't pay attention to a thing I said.
Both he and Levon have the the stuffy noses and neither have been sleeping well which means of course that Jessie and Vergil haven't been sleeping well but they're hanging in there. Also, one of Levon's teeth finally broke through the gum and so the one next to it is about to as well and so the poor little guy is surely not only being frustrated with not being able to breathe through his nose but must be in pain, too.
Still, he is trying like crazy to remain cheerful and he's doing a pretty darn good job of it. 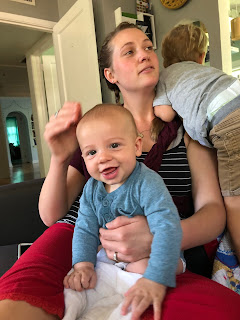 August appears to be as happy and curious and funny as ever. Here he is with his Easter unicorn. 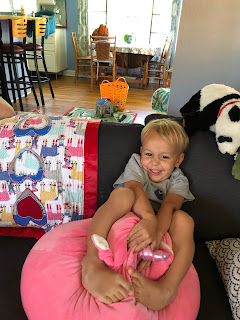 After lunch we went to Trader Joe's and of course I spent most of my time there talking to him while he was in the cart and biting his fingers and calling him a monkey and looking for his tail and making him laugh and he told me, "You, funny, Mer."
Which was about the best compliment I've ever gotten.
And we ran into Rachel which was such a treat! August shivered with the joy of seeing someone he knew in a different place and Levon grinned his darling baby grin at his friend.

When we got back to their house, I read August a few books and then I stopped by Lily and Jason's to give them a little gift for their anniversary cruise. I want them to have the very best time ever.

And so that's the news from Lloyd, Florida today and I've cleaned up the chicks' pen and god, are those things the messiest creatures in the world! WHY do they spread their food all over the floor of their home, wasting at least 75% of it? Oh well. I just roll it all up in their bedding and shake it out for the big chickens outside and they eat it so it doesn't entirely go to waste. I am not sure that one of the supposed jungle fowls isn't in all actuality a baby vulture. Wouldn't that be hysterical?
That bird already has wings that are a good six inches long when she (hopefully) stretches them out. That's crazy!

I've got eggplant panko'ed and baking in the oven for eggplant parmesan and I swear- I still do have a husband and I think he'll be home on Friday. I feel like he's been gone for a year but I bet I'll still recognize him and I'll have so much to show him. The baby chicks, the beans and cucumbers, the peas and corn. It'll be good to have him home. I wake up and check for him every night and it still takes me a second or two to remember that he's not here.