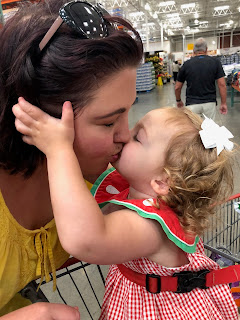 Well, there you go. That's it. That's all there is. Baby girl with curls kissing her mama.
What more is there?
Can I just say that if Magnolia June is the only granddaughter I ever have, she will be woman baby enough to balance out all of the boys? She is a force, a peach, a doll. She is a thinker, a singer, a cuddler and a talker. She is demanding, loving, giving, and joyful. Yellow is her favorite color. She charms everyone she meets. When we went to Japanica today, an older gent could not stop talking about how cute she was. How open. When we left the restaurant, she turned to all of the customers and raised her hand and said, "Good-bye!" as if she were royal.
She is.
She is the princess of my heart and I fucking well wish that the word "princess" had not been ruined by Disney but let's pretend that it hasn't.

In other baby news, I took a bowl of chopped greens and fruit out to the chicks in the coop. Not only had they all figured out how to get out of their coop-within-a-coop, but four of them were outside the COOP! I mean, outside. Peeping and scratching merrily in the leaves, little miniature chickens doing what their mamas would have taught them if they'd had mamas. Oh Lord.
I managed to get one, ONE back in the coop. Then I realized that now there were SIX chicks outside the coop. How in hell were they getting out? The coop has chicken wire which they cannot get out of buried into the ground all the way around as well as a wooden frame. The top part of the coop, about four feet up, does not have the chicken wire, but a sort of wire that I knew they could get out of but four feet up?
I finally figured out that they were probably flying up to the top of the lid of the chick box and getting out of the wire from that advantageous perch.
Jesus.
I tried and tried to herd them back in the coop but forget it. I finally just pulled a chair over there and guarded them. Mostly I was worried about cats. My cats never chase chickens but these babies have to be a temptation. And let's not even mention the two feral cats that hang out around here. They would have no qualms at all about snatching one of my chicks. And then there's hawks...
But they were fine and Mr. Moon got home and we opened up the door to the coop and he herded one way and I herded another and got them all back in and I lifted the lid of the chick box, hoping to make a less convenient place for them to fly up to to escape.
And then they all ate and drank like office workers at a Friday afternoon happy hour involving free tacos, as happy to be back inside as they had been to be outside.

And now I'm going to go finish making my strawberry rhubarb pie. The pastry is waiting in the refrigerator, the strawberries and rhubarb are macerating in sugar and tapioca. I was going to get this thing done way earlier but I had not taken into account that I would be spending so much time doing guard duty for teenaged chickens.