No. I Do Not Believe In Weird Stuff

I just watched a video and read an article about a completely distraught little boy who asked the Pope if his father, who had recently died and who was an atheist but who had had his four children baptized, would be in heaven. He said that his father was a good man, even if he was not a believer. And the Pope, that big Catholic Daddy, assured the little boy that God would be so pleased that the father, despite being an atheist, had had his children baptized that surely, he would not abandon him and that yes, he would be in heaven.
How compassionate of the Pope!
Bless his heart!
And what kind of a fucking church teaches children that people they love will not go to heaven but, in fact, will probably burn in eternal flames because they did not accept their particular beliefs? Not only teach children this but instill that belief into these sweet, innocent little children so that if one of their parents dies which has got to be one of the hardest things on earth to go through, they have to also fear for the very soul of their beloved mother or father.
Well, good for the Pope who seems to have at least a slight grip on reality and who has said some fairly shockingly humane things but it's not like he's actually changed any of the doctrine.
Nor will he.

Anyway, I just hope that no one gets ahold of my grandkids and tries to convince them that I'll be burning in hell when I die because I'm an atheist. Or at most a Possibilian.

I need to talk to them some more about energy and the impossibility of it being created or destroyed and reassure them that as long as they live they will not only carry me in their genes but also hopefully, in their hearts which will always know that I loved them even before I knew they were going to be born.

Okay. Enough of that.

Owen had a field trip to Panacea to visit the marine lab which we love so much and Lily had offered to chaperone and so Ms. Magnolia June came to the Mer and Bop house to hang out. We had a good time. She was quite amiable today and open to almost all suggestions. I made a little video and in it she says "Yeaaah!" in the way that only Maggie can do.

Those curls. Those cheeks. Those lips! Those pudgy little arms and that beautiful skin. She is a darling girl and she reminds me so much of her beautiful mama.
We walked to the post office where she charmed the post mistress completely.
"She's so cute!" she kept saying.
And then we took the requisite and traditional picture by the door of the former train station where the post office is quartered. 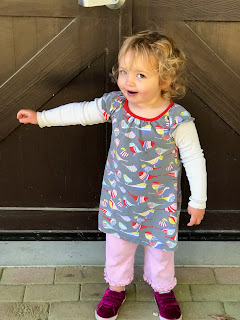 How much do you want a pair of purple velvet sneakers?
She walked the whole way there and back and I was very proud of her and I told her so. 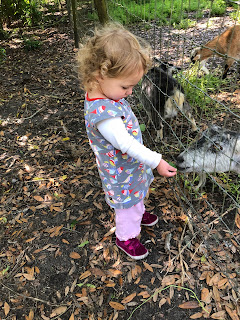 She wanted to feed the goats and so we did that too. We also cleaned up the baby chicks' pen and fed some cornbread to the Jungle Fowl out in the coop. We read a book, we played with dollies and pretended to go to sleep and wake up, we hung clothes on the line, we talked to and played with Boppy. We also ate spaghetti. Which was delicious.

Lily came to collect her little Hummel Angel around two and she had Owen with her. He and I went out to the garden and picked some sugar snap peas and a carrot and the carrot appeared to have two legs and so Owen made him into a man. 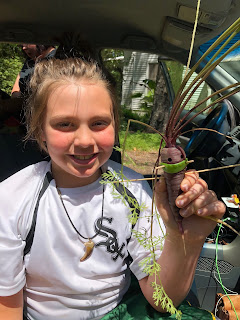 I love that boy so much. Look at him with his unique Owen hair style, his bear claw necklace that his Boppy made him. His head comes up to my chin now.
MY CHIN!
And he still lets me hug him whenever I want to which is about all of the time.

We kissed everyone good-bye when they left to go pick up Gibson at the bus stop and then I did a little yard work and Mr. Moon did some car-related work. It's been a sweet, easy day.

Here's a picture I got of Baby Levon. 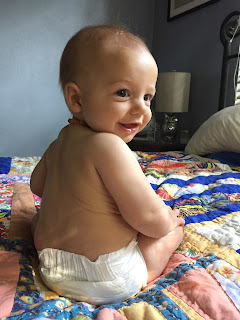 Well. You know I'm his grandmother but the fact of the matter is, that is one darling adorable little boy. Jessie reports that August has been saying, "I miss Boppy's house. I missssssss Boppy's house."
I think he would be perfectly happy to sit next to his grandfather in that big leather Lazy Boy and watch fishing shows and read Outdoor Life for days. Perhaps he would condescend to occasionally let his Mer change his diaper or read him a kid book or make him some pancakes.
Right this very second Mr. Moon is down the road and through the woods a bit, fishing from a pond to see if it would be a good place to take the grands to catch some perch or bream which is about a million times more exciting an activity than weeding a garden is.

But that's okay. Boppy may have the fun machines and camper vans and fishing poles and power tools and deer heads on the wall and a truck, but Mer has...well?
Control of the bacon?
Yeah. That's it.
Control of the bacon.
Maybe I should start making more cookies.

Ah, they know I love them. Now and forever. Or at least they will know it for as long as they remember me.
Cookies couldn't hurt, though.