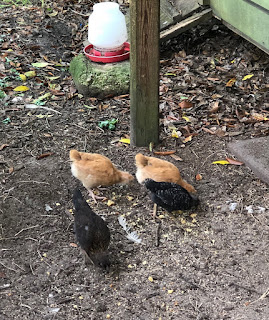 This morning I decided to let the littles in the outside small coop explore the big coop if they wanted. I opened the wire lid of it and the two blond Buff Orpingtons immediately fluttered up to the edge and then fluttered down to the ground with a few of the jungle fowl right behind them. Here they are, eating some cornbread. I hope beyond hope that they'll get back into their little coop tonight but they probably won't and I'll be forced to chase the little buggers to catch them and put them safely in with their brethren. I'm about ready to transition some of the inside chicks to the outside and have also made the coop box ready to receive babies. I'm not quite sure how I'm going to do this in terms of who-goes-where, but I'll figure it out.

Another thing I did this morning was to give myself a challenge. Lord, that sounds so stupid, doesn't it? But hell, that's exactly what I did.
And I met it.
Last night I said to Mr. Moon, "If I walk seven miles tomorrow, I will have walked twenty in total for the week.
"Haha!" we both said.
And then this morning I just fucking decided to do it and I did. 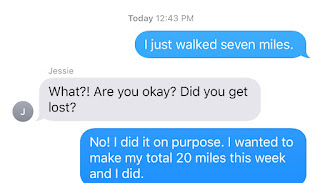 I LOVE Jessie's response to this.
Did you get lost? Oh my god.

No. I did not get lost unless you count getting lost in a sort of meditative trance. I am listening to this. 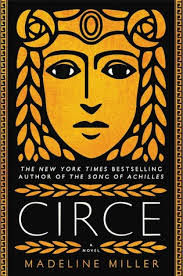 I heard part of an interview on NPR with the author yesterday and today, when I went to search for a new audio book from the library, there it was.
It's rather beautiful.
So I put one foot in front of the other and after quite awhile, I had walked all seven miles. I did not do it very fast, but I did it fast enough.
And once again, I did not die. I didn't feel as if I would die at all. Which is sort of amazing.

I have written many times before about how I simply cannot walk for more than a few miles without stopping to pee. Quite frankly, I feel fortunate that I am still continent at all and it has not been easy to find places for me to hide from the road to squat and water the weeds. The road is barbwire-fenced for miles and miles. But I have found a few places and this is the magical one. 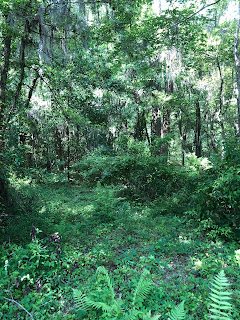 The photo does it no justice. I can't seem to capture it properly. But it is shady and green and fern-filled and cool and it is a lovely bit of serendipity that I found it in such a mundane way. It is posted but not fenced and I take that to be as much invitation as I can rationalize. It's like stepping into another world and I promise, I tread lightly.

I saw a pileated wood pecker today, which is not so uncommon but I also saw something that I could not positively identify although I thought it was probably a fox squirrel. I looked them up when I got home and I was right. Here's a picture of one although I did not take it. 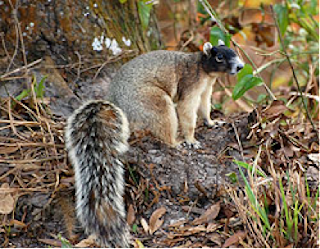 Trust me- that looks NOTHING like our regular squirrels and they are rare here and they are good at hiding but the one I spied was on the road and as I came around a corner and saw it, it did not dart immediately the rest of the way to the woods but seemed to observe me as I observed him. And then, he scooted up the bank and up a tree and I felt so lucky to have seen him.

And so that's what I did today, or at least part of it and Lily finally got that tooth pulled which is wonderful because it started causing her agony again yesterday. I don't care how old my children are, it makes me so anxious when they are sick or in pain and I am so glad that her pain has been relieved.
I thought I was going to be hanging out with Magnolia tomorrow morning because that's when Lily's appointment was scheduled for before her pain became unbearable which is why I decided to walk seven miles today to make the twenty, thinking I would not be walking tomorrow.
And I probably will NOT be walking tomorrow but I sure do need to get into the garden and get some work done there.

I hear the little chicks peeping their roost-time song.