Chickens And Grandbabies And Memories, Too

I am simply not breaking any new ground here lately. Not in my life, not on the blog. And you know, that's okay. A large part of the reason I write here and post pictures is so that my children and my grandchildren will have a record of some of the things that we and they have done and how everyone looked, month-by-month and year-by-year and as such, I do recognize great value in blessourhearts, even if what I do here is not exactly literary.
Or, at all.
And there is also satisfaction in knowing that some of the things I write about do touch other people in some ways, whether I am writing about depression or anxiety or childhood sexual abuse or politics or religion or chickens or the garden or cats who bite that we love anyway or cooking or eating or...
You know.
From the ethereal to the mundane and a lot of the stuff in between.
Today was fairly mundane but it had charm, as well. I was planting a rose that Ellen Abbott sent me just as it was beginning to sprinkle, tucking it into dirt with a little bit of chicken shit buried deep beneath the roots so as not to burn them and placing hay around it as mulch when I heard a car pull up and then saw August running towards the house, his little arms still as he ran, the way he does and my heart did burst a little.
I called to him and he changed course and as always was full of questions about what I was doing and why I was doing it and on and on and when I'd finished we went to look for eggs and found three and carried them into the house where I showed Jessie and August the four new chicks.
"Do you want to go get more chicks?" I asked him.
"Yes!" he said and so I changed clothes and we and his mama and his brother all drove to Monticello in the now-falling rain where we had lunch and then went and bought chicks at the Tractor Supply. Vergil has agreed that building a coop and a run would be a splendid thing to do and so I am going to raise a few babies for them while they get things ready.

I love the Tractor Supply. They have EVERYTHING and they are so nice. We looked at all of the different varieties and it's so hard to pick out a reasonable number of the peeps. They did have one breed that I refused to even consider which is the Turken. I have NEVER heard of this bird but yes, they are a real breed of chickens and feel free to google them. Somehow, a naked necked chicken (which is basically what they are) is just WRONG to me but I am sure that's merely a prejudiced judgement and they are probably lovely birds.
Anyway, we decided on two Plymouth barred rocks, two Buff Orpingtons, two Rhode Island reds, and two Dixie Rainbows, which I had also never heard of. And they shall always be called Dixie Chicks, of course. 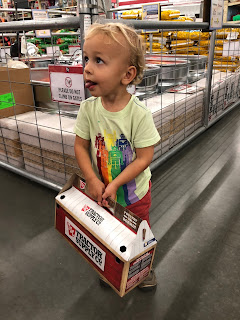 Here is August, concentrating so hard on holding the two Buff Orpingtons safely that he had to stick his tongue out. We also bought some chicken probiotics (helps to prevent paste-butt and yes, that's a real thing) and chicken electrolytes and another little feeder and we brought everything home to Mer's and took the babies out of their boxes and set them into the old Pack'n'Play with the other chicks. 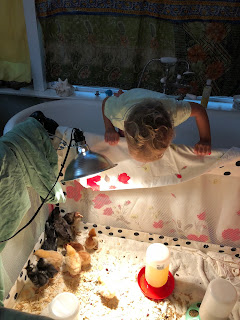 I was a little concerned about putting the new babies in with the older chicks I got yesterday because they are so much bigger but everyone seemed cool with the arrangement and August wanted me to pick up each one so that he could pet them on their heads. He did not, however, want to hold any of them. His mama did though. 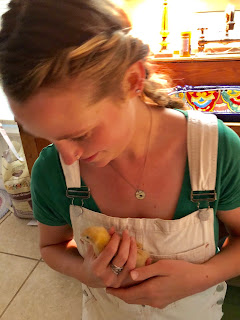 There are few things as light and as soft as a young chick. Holding one is like holding condensed air. Soft, condensed air which often has a loud cheep.

After we were certain that all was well and I had covered the sides of the baby bed with old tablecloths because the little ones need to keep warm and it is going to get chilly tonight, we let Levon show off his crawling skills. 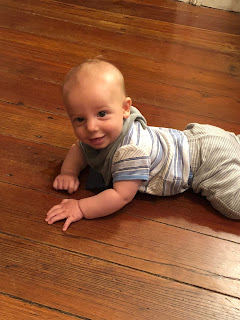 He's gettin' there, folks. And also? He is sitting up by himself. Still not five months old yet. When you hold him, he tries to climb you. "You need to get this kid a baby rock gym," I told Jessie. He is such a merry little lad, so quick to smile and laugh.

And I do believe that on Wednesday, Jessie and I are going to drive back to Crawfordville to see if we can buy some Americaunas as that is when I was told they were getting a new shipment of them.
Good Lord, but what a crazy assortment of chickens we are going to have. From the possible Jungle Fowl birds I bought yesterday to the very decorous and domestic Barred Rocks, it's going to be a United Nations of Poultry.
I hope.
As I said to Jessie today, "It's not just 'don't count your chickens until they've hatched.' It's 'don't count your chickens until they've hatched, grown up to be hens, started laying eggs and survived for a few years.'"
As we all know by now.

And all of this has added up to a very fine day but something else happened that has amazed me.
I really want to write about it now but I want it to have its own post, although most of it will be pictures and a link to a ten year's past post I wrote.

Let me just say that it has me time tripping and remembering things I had maybe not entirely forgotten but it's definitely sharpened the lens of my memory.

I'll sit down tomorrow morning and write about it. It won't be as earthshaking to anyone as it is to me but it is definitely part of my history, as well as Tallahassee history.
Here's a teaser. 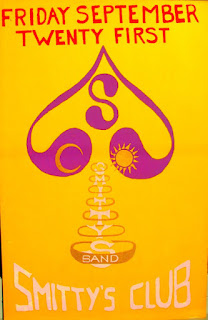 The rain has cleared. My gift rose has been planted and I like to think that it is stretching its Texas roots out into the Florida dirt to see what that might taste like. The corn and cucumbers are coming up. There are twelve baby chickens in my bathroom. They eat, they poop, they sleep. The birds are singing the world to sleep with their end-of-day songs. And despite all of this goodness, I am filled with a sort of melancholy but it is a melancholy which will not kill me nor has it robbed me of all feeling or color or sense of light.

I could never say it better than this.