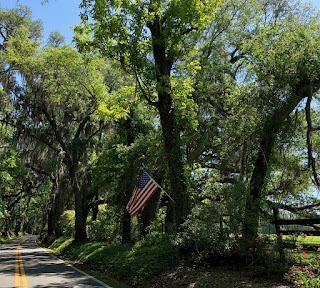 I walked on the beautiful road again and although there are parts of walking through the woods and fields I miss, there are many compensations. However, the abundance of American flags flying is not one of them. It would seem that almost every house has one and the bigger the house, the bigger the flag. This is just the truth. And there are some Christ Almighty big houses! The largest one I walk by is on the highest hill, of course, and I swear it must be a quarter of a mile from the beginning of their regally fenced and landscaped yard to the end of it.
It's like walking past Caesar's Palace in Las Vegas only not really.
That flag above is not the flag which flies in front of that house. That flag looks like something that might be flying in front of the White House.
But, you know, the shade, the lack of traffic, the little side roads that I can take which lead me into more woodlands are all so lovely. 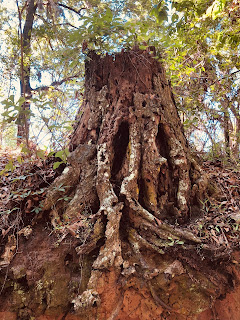 An ancient tree stump, its gnarled roots still firmly holding on to the clay bank of the road.
I can only imagine that there's an entire community of different critters living in it unless the fairies or gnomes have chased them all out.

And so I enjoyed my walk and the hills seemed easy and gravity did not suck the way it often does and when I got home, Jessie brought the boys out for a visit and to visit the chicks.

The first thing August wanted was the marbles and the rat so that this game could be played. 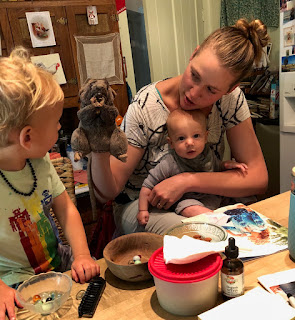 Ratty picks up a marble. 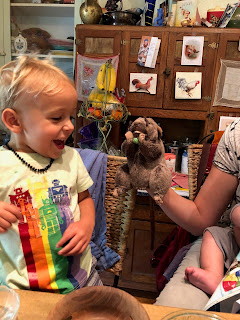 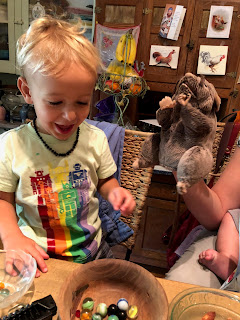 Ratty plonks the marble in a bowl and there is applause and cheering.
It just never gets old.

Here's Levon with the very last of his long baby hair twisted up in an Alfalfa. 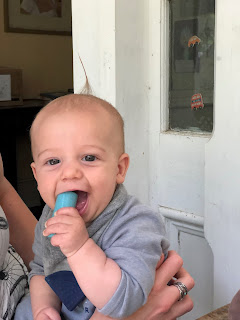 That child is chewing on everything.

We had some of last night's eggplant parmigiana which was quite delicious if I do say so myself and we checked out the eggs, the garden, and fed the goats next door some collard greens. We cuddled and kissed the baby chickens. We gave them greens and grapes. We read books. And we kicked bamboo. 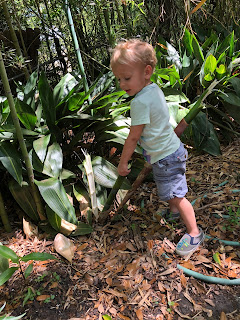 And we played with bamboo. 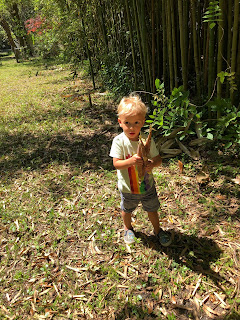 And we collected bamboo.

Bamboo is endlessly fascinating.
"Can I munch it?" asked August, bending his head to a broken stalk.
"Sure," we told him.
He said it was delicious. I am pretty sure it wasn't. Remember when Owen used to take the youngest stalks and cut them up for me with a butter knife and serve them on a plate?
Oh. All my little boys.

And that was most of my day and perhaps tomorrow we will be going to Crawfordville for more chicks. Maybe. And speaking of chicks, Birdie sent me this video on Facebook.

It cracks me up so much and I believe that everyone who has ever been in a classroom or tried to get educational with their own kids can relate.
A Lexington principal named Gerry Brooks made the video and it would appear that he's made a bunch of videos and I think I might need to watch them.

Lily and Jason made it onboard their ship and here's a picture. 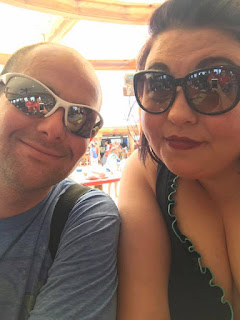 Glamorous? Oh yeah.
Some people are cruise people and some people are not.
I have a feeling that Lily and Jason are. I am waiting for reports.

All right. One more evening of solitude and then it's all going to get crazy. Mr. Moon will be coming home, towing his boat and carrying his fishing poles and his ice chests full of random foods and his duffle bag full of laundry and hopefully a fish or two. He sent me this picture last night from the island. 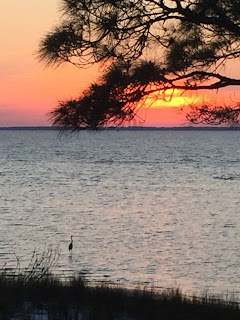 I know he hates the thought of leaving that sort of serenity and beauty. But I bet he'll be happy to sleep in his own bed again.

It is so quiet here and I have collards and kale cooking and brown rice simmering and tofu being squished to make barbecue tofu with. Jessie inspired me with that idea.
The chickens are singing their evening going-to-bed song, a crooning tune which is peaceful and pretty, soothing and sweet.