Busy, busy, busy all day long. Got up to find it chilly and gorgeous and took my walk which was once again a joy.
Well, you know- a joy for something involving walking fast for a fairly long way up and down hills. It's just so damn beautiful on that road. Yes, there are hills but they are gently rolling, and trees line my entire route, bending over me to offer shade and a feeling of grace. Today I saw two Florida cracker cows laying in a pasture, their horns so long and pointed that a matador would faint if he entered the ring with one of them staring him down. I accidentally flushed two quail who had probably nested on the side of the road and they flew up with great and dramatic wing fluttering which was as startling to me as I had been to them. I did walk past a house with two dogs sunning in the yard, one a rather large, fierce looking white German Shepherd mix and he barked a little at me but did not bother to come chase me and his companion did not even deign to make a sound.

I came home and got ready to go to town and picked up Lily and Maggie. Maggie was so happy to see me. She is in a very good mood right now, having her mama back home. She was carrying her dolly and wearing her purple glitter Mary Jane's and she reminds me so much of her mother when she was a little girl.
We met up with Jessie and Levon at Costco. August was with his daddy, having fun at the scrap metal place. So we ladies and Levon did our shopping. 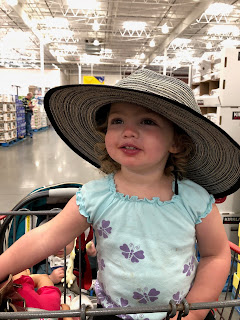 Magnolia June in a hat.

And then off to lunch where Vergil and August met us. We asked Lily lots of questions about her cruise. It really does sound like they had such a good time. Here is a good-bye kiss shot. 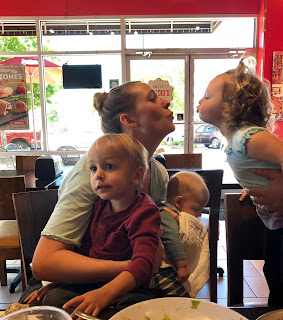 August, as usual, is attempting with great success to ignore the whole process while Maggie is throwing her whole being into it.

And then Lily and I were off to Publix for the things that Costco did not have or else which we did not want to buy great and huge amounts of and then to wait for Owen and Gibson's bus and then I drove them all home.

I came back to my own home where I unloaded the groceries, put everything away and turned my attention to chicken tending. I cleaned up the Little's pen and boy, will I be glad when those chicks are big enough to take outside! My beautiful sanctuary of a bathroom with the Talavera sink has become a chick nursery with all of the attendant odors and mess and noise. It's all right and I really don't mind it but it will be nice when it returns to its true and beautiful purpose which is to delight me every time I walk into it.

Also? I need a dust-buster. If you've ever tried to clean the chick feed out of the bottom of a Pack'n'Play, you will understand.

Anyway, I gave them fresh bedding and food and water and greens and grapes and some crumbled up cornbread and then I took a bowl of the same out to the Jungle Fowl who survived the cold night just fine. They were excited to have the treats.

And there was laundry to do and dishwasher unloading and bread making (I make the dough in the food processor so it's not really that hard) and spaghetti-sauce-starting. The bread is rising nicely, the sauce is simmering sweetly. It has zucchini, onion, red peppers, tomatoes, mushrooms, cut-up leftover eggplant parmesan, grass-fed beef, and I'm about to go throw some spinach in it. Oh. And a cheater's jar of Paul Newman's Sockarooni! which was on sale at Publix.
I don't think I'll bother with a salad. If that doesn't have enough nutrients in it, we'll just have to suffer.

Have you read this?
Adam Davidson's lips to god's ears. Or gods' ears. Or, oh fuck. Just let it be true.