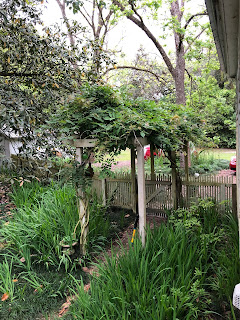 It's been "supposed" to rain since last night and indeed the radar does show a big sweet whopper of a front moving in that should bring us some relief and oh, how I long for it. It's been gray and heavy here all day and I haven't felt like doing much at all with the very air pressing down on me binding my limbs and my head with hot, heavy, damp wool.
Or so it seems.

Lily has a bad tooth. Yesterday she bit down on a piece of gum and it cracked and probably exposed a nerve because hot pain seared through her and of course, there are no dentists available on a Saturday so she's been nursing it along and using whatever pain relief she can get and so did not feel like coming over this morning but Jessie and her two littles did. I made pancakes that were too gluey in the middle because I used one whole huge sweet potato and a banana, smashed up, but August ate three of them and I have no idea how many his Boppy ate. I also cooked bacon, of course, and some eggs with kale and peppers and tomatoes and onions and that's what I had. I have to say that the kale is surely hanging in there and I am grateful for it.

August wanted to be with his Bop, and so he was. Boppy is the rock star, the man, the fun guy, and they watched fishing shows and shows with wild turkeys and Jessie and I entertained ourselves, playing with baby chickens and with Levon who is growing so fast that he's outpacing the chicks and that's saying something. 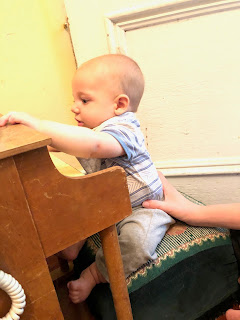 Here he is, Jerry Lee Lewising the piano, pounding on it with all he has. Can you see his little toes, curled in concentration?
And then Jessie went upstairs and brought down the old baby walker which every one of the grands has spent time in, going up and down the hallway in this old house. His feet just, just, just touched the ground and he was so happy. 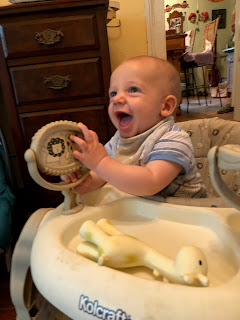 Wouldn't you love to be that happy?

And we messed about and took the two barred rock chicks outside to the little pen. I do believe one of them is a rooster although I could be wrong. But its little comb is so much more pronounced than the other one's and there is also sign of a wattle coming in below. He is bigger, as well. But who knows? Jessie and I discussed what we should do if we get a bunch of roosters and we've about decided to take them to the woods where those two feral roosters who have been hanging out for months live. They are still there! Jessie saw them today when she was driving home and Mr. Moon saw them the other day when he was walking there, checking out the little pond. It could be a feral rooster ranch! What do you think?
We learned today that chicks are not nearly as wild about chopped up sugar snap peas and bok choy as they are about grapes and kale.
I can't wait to get them some watermelon because I think they will go insane with joy.

August and Boppy spent some time in the camper van that Scott and Yolie sold to Mr. Moon. All of the kids love that thing. It doesn't have to move an inch to make them happy. It's a play house and a climbing gym both, with the added bonus of the opportunity to pretend to drive. 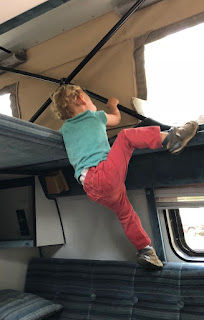 Here's August, future rock climber and explorer. He can get from the seat to the loft bed all by himself and then all the way back down again. He's a strong little monkey.

And then, because he is kind, he let me read him a book or two. He asked to hold the very old doll which sits with her sister doll on a shelf in the library and I got it down for him. He is fascinated by this doll. 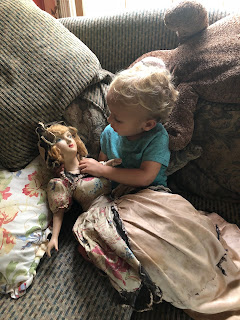 "Very, very old," he says soberly, stroking her face. "Cracks," he says, pointing to the crazing in her porcelain painted face. He is taken with her bright red lips and touches them to see if the color will come off but it does not. We call this doll Lucy after the doll in A Friend For Little Bear by Maurice Sendak. 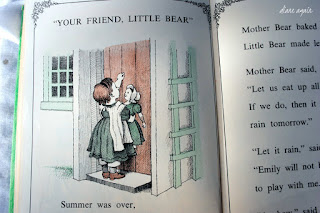 There is a resemblance, don't you think?

Such bliss for me, reading this beloved book to the boy holding the doll so carefully.

And that was my Sunday and now I hear one lonely frog croaking, trying to coax the rain into coming.

Oh! The soup was very good last night and I sent Jessie home with a lot of the leftover leftovers as well as some kale and some carrots and some peas.
Levon chomped on some peas and a carrot which August gave him after he and Boppy washed them. Levon has not had his first official bite of food yet but he loves teething on a carrot or a pea pod. His two little front bottom teeth are all the way through the gum, sharp and miraculous, as all first teeth are before we grow up and our teeth become problems and pain and expense and worry. 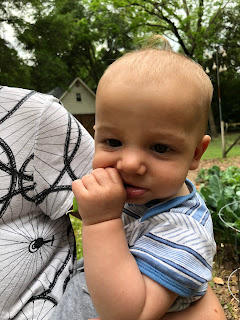 All right. Time to go cook the supper for me and the man.

Thank you for being here. I just wanted to say that. Thank you. So very, very much.