My Sweet Boys Are Here 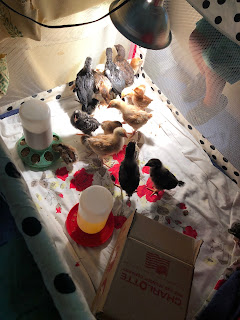 I think that Jessie and I got five (or was it seven?) more chicks and we have vowed and declared we are done for now. This makes a total of seventeen (nineteen?) living in the baby bed and we do indeed have a sampler pack of chicken varieties and at this point I can't even remember what we have but I do think we will be having lots of fun watching these different types of birds display their own inherent behaviors and laying their own unique eggs.

Mr. Moon got home and August was already here and he immediately switched every bit of his attention and allegiance from me to his grandfather and proclaimed again that he is Little Boppy. Right now he is sitting with Big Boppy in the Big Boppy chair. Mr. Moon's foot decided to get weird again and he got himself to his regular doctor's office this afternoon where they sent him for an ultrasound. It now appears that he has a small clot in a superficial vein and it's not going to kill him but he's on blood thinners. He remembered that before all of this stuff started he'd banged that shin into a car door and sometimes a vein can be traumatized into creating a clot and this is probably what happened.
Ah-yi. Standing on his feet and fishing for days on end, not to mention doing carpentry and plumbing work at the island hasn't helped.
It sure is good to have him home where I can take care of him and right now I am grateful for August's presence because if he wasn't here, I know that man would be out there cleaning his boat and fishing equipment and doing all sorts of crazy things that he just does not need to do right now.

So that's the story and August told me that he wants to sleep in our bed with the fans on (and here he demonstrated how a fan moves the air with his clever arms and hands) but I think I have convinced him that he can sleep right beside us in his bed (another pack'n'play) and that the fans will still blow on him and he will be comfortable.
We shall see how this works.

I better go get some supper made. That boy didn't get a nap today and I have a feeling that being all warm and cozy in Boppy's chair is making him sleepy.

And oh! Today is not only Lily and Jason's tenth anniversary, it is also Jessie and Vergil's fifth anniversary and I would go back and snatch pictures from their weddings but I am just too tired and I hope that they know how much they are loved, how much their unions mean to our family in all ways, and how much we wish them every good wish for the rest of their lives for continued happiness and fun and health and joy.
And teenagers who are not too sullen.