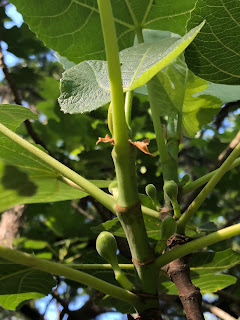 Tiny figlets are forming on the fig tree and every year I get so optimistic when I see them but then the critters get to them and they never get very big and my entire fig harvest is fairly embarrassing.

The sugar snap pea harvest, however, is abundant. Here's what I picked today. 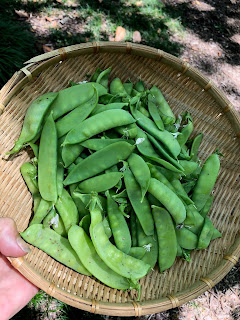 Yes, there are a few aphids on those peas and no, they won't hurt a thing. I get a newsletter from the New York Times about cooking and food and in today's letter there was a recipe listed for Stir-Fried Beef and Sugar Snap Peas.
I do believe I will make that tomorrow night but with venison. I think it will be delicious. Peas and onions from the garden, venison from the woods.

So. It's been Sunday. I did not have the blues but did not feel exceptionally brimming with joy, either. I didn't feel like doing much outside and Mr. Moon was mowing which means I can't hear my audio book as I work in the garden so I decided to stay in and do a little ironing and watch some mindless TV. I found Zombieland on some random channel and watched the whole darn thing as I smoothed shirts with heat and hissing steam.
I have to tell you- and this is a confession- I love that movie. I think I just really love Woody Harrelson and have loved him since he first appeared on Cheers. Nobody in the world can do that goofy good-looking farm boy, aw shucks character like Woody. White Men Can't Jump is another one of my favorite movies and I should be ashamed to admit loving either of them but I'm not.
But back to Zombieland.
Woody's character is named Tallahassee. The movie was indeed filmed partly near here. And...BILL MURRAY PLAYS HIMSELF IN IT!
It's just a funny and absurd movie and like Shawshank Redemption (another favorite of mine), if it's on TV and I come across it, I'll watch it. Same with the Blues Brothers.
I never claimed to have any class.

I transitioned two more chicks to the outside coop today. The little Dixie Rainbow chicks which I'd never even heard of before we came across these at the Tractor Supply. That makes a dozen chicks outside and seven inside now. And yes, some of the teens are still getting out of the coop but they can also get back in and I still have no idea how but I'm trying just not to worry about them. Which always works so well.

Got the big news today that Gibson has now lost both of his top teeth. Here's the picture. 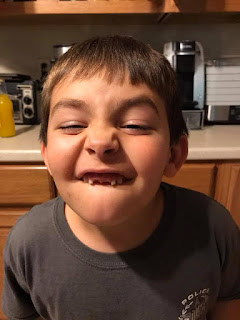 We shall now be calling him Fang. It's a good look, don't you think?

That's all I got today.
I had a Sunday which didn't suck and that's about as much as I can ask for the Sabbath.